Taken in the Tracy area of San Joaquin County, our photos for the central region present a shaker bringing down the Nonpareil and the good shell seal observed in the that orchard, followed by the early hull split in an advanced example of the Padre.

Hot conditions dominated the weather in the central region during July, particularly in the latter half of the month. Daily maximum readings were reported at their most comfortable levels in the mid 80’s to lower 90’s in the period’s opening week. However, readings quickly rose to more challenging levels, with readings ranging from the mid 90’s to as much as 108 degrees for the balance of the period. Morning low temperatures provided only a minimal respite from the daily assault of heat, with readings widely reported between the mid 50’s and upper 60’s.

Harvest operations have begun the Northern San Joaquin Valley. Growers along the west side of the region sent shakers into the most advanced Nonpareil plantings late in the week of July 17th. Shaking activity increased during the final week of the period and observers are reporting that growers in all areas will begin shaking by the second week of August. Growers with plantings of the Independence variety are also expected to begin shaking within the coming week. Reports of uneven maturity within the Independence have surfaced again this year, prompting growers to ponder the proper timing for shaking as they work to cleanly remove the crop from the trees.

Growers spent much of the period irrigating and preparing for harvest. Treatments for Navel Orange Worm, NOW, were completed, with the actual timing based on observations of pheromone and egg traps set in the orchards. Pest Control Advisors are now monitoring orchards for the next wave of egg laying by female NOW moths, to determine if additional controls are warranted.

After experiencing excessive losses caused by NOW in the 2015 crop, growers and their Pest Control Advisors have focused on reducing the impacts of this perennial insect pest. Better mummy shaking conditions resulting from the beneficial rains received over the past winter have certainly helped. And as shown in the photo accompanying this report, good shell seals in the Nonpareil will also provide an increased degree of protection against infestation. Enhanced shell seal also helps prevent damage from ants while the crop is laying in the ground after shaking.

To this point, web-spinning mites have not been created widespread issues for northern San Joaquin Valley growers. Natural predator populations have kept expansion of this pest in check. However, the hot temperatures have increased stress levels on the trees and promoted increases in mite populations, leading growers to watch their orchards closely. Materials added to hull split NOW treatments have helped prevent explosive increases in mite pressure and growers are hopeful that additional treatments will not be needed.

Vegetation management has also been a critical activity, as growers worked to ensure a smooth, even orchard floor that enables easy movement of the shaken crop while minimizing dust during the harvest. This is best accomplished in most cases by sending flail mowers into the orchards to mow the weed growth closely to the soil surface prior to shaking.

While it is a bit early to tell how the harvest will progress, there are tell-tale signs of what lay ahead. Observers on the west side of the valley have noted hull split in the Sonora, Carmel, Aldrich and Price, as well as on the outside rows of Padre plantings, signs that this year’s harvest may be very compressed with little lag between varieties. 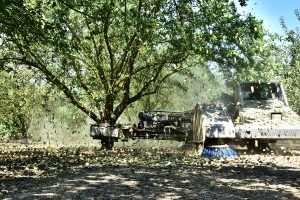 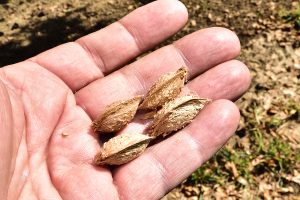 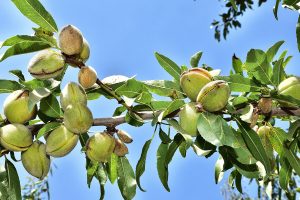