Taken in Colusa County, this report’s photos for the northern region present an orchard receiving its final pre-harvest irrigation, a sweeper blowing the nuts at the end of the row back into the orchard prior to sweeping and a swept windrow waiting to be picked up.

Growers in the Sacramento Valley received only a slight reprieve from the intense heat experienced in the San Joaquin Valley, farther to the south. Daily maximum temperatures ranged from the upper 80’s to upper 90’s during the first half of the period. Reading’s then climbed above the century mark for the majority of the period’s latter half, with a change in the state’s weather pattern finally allowing temperatures to moderate in the period’s closing days. Morning lows followed the pattern established by the daily maximums, with readings ranging from the upper 50’s to upper 60’s throughout the period.

Sacramento Valley growers sent shakers into the most advanced Nonpareil plantings along the west side of the region during the third week of July. While the crop in the earliest orchards has been picked and delivered to huller/sheller facilities, deliveries from the shellers will not be received until the first week of August. Observers are reporting that shaker activity will increase along the I-5 corridor during the coming week, while growers in the Butte County area are completing their final pre-harvest irrigation and will begin shaking by mid-August.

Growers focused on pest management and irrigation during much of July, in anticipation of the approaching harvest. Hull split treatments to control Navel Orange Worm, NOW, have been made, based on “trap counts’ used to monitor the insect’s stage of development. Growers and Pest Control Advisors are reporting that NOW populations are running lower than last year’s levels. This is no doubt the result of improved mummy shaking conditions this year, produced by the better rainfall amounts received during the winter of 2015/16. The wetter conditions resulted in easier removal of the nuts containing over-wintering NOW larvae. This greatly reduces the population in the following growing season, providing for more effective control of the remaining insects, less environmental impacts and reduced crop damage.

Growers have also completed bait applications targeted to specific almond-feeding ant species, timing applications between the irrigations required to support the developing crop. Web-spinning mites have not presented significant problems this year and the region’s orchards are in generally good condition, though observers have reported some defoliation in orchards where Scab, a foliar fungal infection has taken hold.

Observers have reported that while harvest operations are just beginning on the Nonpareil and Independence varieties, hulls of the Price and Sonora varieties are also splitting and will follow the Nonpareil closely. 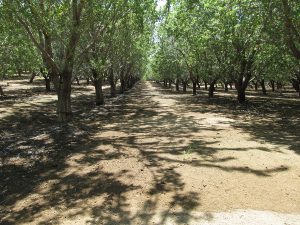 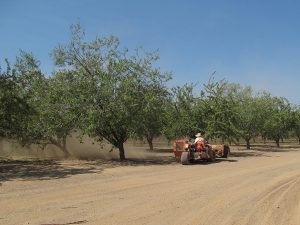 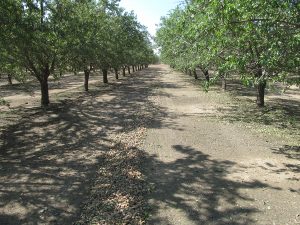