Taken on the eastern side of Stanislaus County, the first two photos from the central region show the scattering of bloom in the Sonora variety and the emergence of green tip in the Butte variety. The third photo shows pink tip beginning to emerge in the Monterey variety in western San Joaquin County.

Sunshine and warm weather graced the North San Joaquin Valley on Tuesday. Daytime highs in the low 70s with gentle low winds made for excellent bee activity, though few flowers were presenting for pollination. With overnight lows in the mid 40s, bud development has been progressing quickly in recent days. Above-average temperatures predicted for the near future should continue to spur bud development in the coming days.

The early blooming Sonora cultivar was observed showing a few flowers open for pollination while most of the buds had significant pink tissue emerging their sepals. Overlap of the Nonpareil cultivar and its associated pollinators of Price, Fritz, Aldrich, and Monterey appear strong. The vast majority of buds are in the advanced green tip stage of development with some pink tissue starting to emerge from the sepals. Carmel exhibited a small amount of dormant buds while most were in green tip stage. Most of the green tip observed in these varieties is in the advanced stages with well developed sepals that have pink tissue observable from overhead. There was no sign of the protective scales left from dormant buds. In the later blooming Butte variety, most of the buds had broken through their protective scales with visible sepals beginning to develop. This is also considered green tip but it is a less advanced stage. The Padre cultivar is mostly at this stage with a significant portion of the buds still dormant.

Bees are being delivered as quickly as possible, but there are still growers waiting for hives. Growers are finishing up herbicide applications and are preparing spray rigs for a potential fungicide application in case the weather grows inclement. A few growers are polling off any remaining mummy nuts by hand from last season as new buds are too far advanced to mechanically shake without removing them. 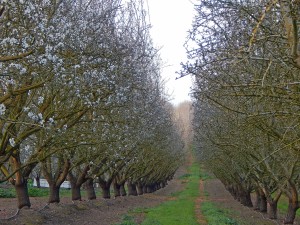 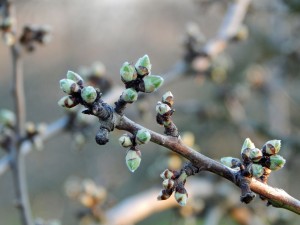 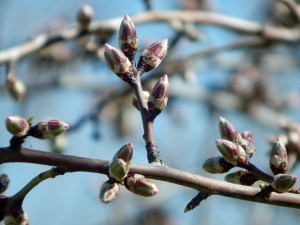