Taken in the Chowchilla area, the first two photos for the southern region show the green tip stage in the Aldrich variety and scattered pink tip in Nonpareil. The third photo shows hives placed in an orchard in Wasco.

Near record warm temperatures were present in the South San Joaquin Valley on Tuesday. Daytime highs rose into the mid 70s in some places with overnight lows in the low 40s. Skies were mostly clear with light winds making for excellent bee flight conditions to pollinate what few flowers were presenting for pollination. With above-average temperatures and calm conditions in the forecast for the rest of the week, it should make for some friendly bee weather for the first part of bloom.

Overlap between varieties appears strong in the southern region. Nonpareil, Monterey, and various California type varieties all appear to be within a day of each other in terms of development with well developed sepals being observed in those varieties and very few dormant buds remaining. Carmel was observed as a day or two behind Nonpareil. As usual the early blooming Sonora is three to four days ahead of Nonpareil and beginning to have some open flowers present for pollination. The later blooming Butte and Padre cultivars are swelling but remain largely dormant in most of the region. In southern Tulare and Kern counties there is little more green tissue breaking through the dormant buds with sepals beginning to develop. Bloom could progress at a rapid pace given the anticipated above-average temperatures for the region.

Bees are still being delivered to orchards as bee keepers try to finish their deliveries before bloom progresses too far. Pre-emergent herbicide applications are being completed and orchard floor maintenance continues. Growers are preparing their spray rigs in case inclement weather causes a need for a fungicide application. 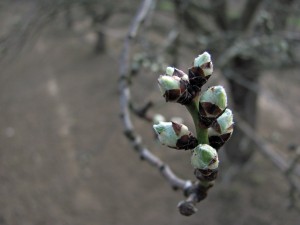 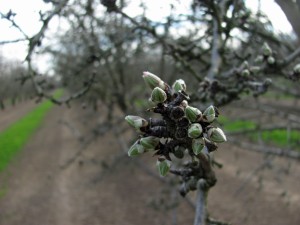 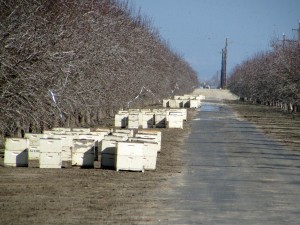