Beautiful, warm weather graced the Sacramento Valley on Tuesday. Daytime highs were in the mid 70s with overnight lows in the mid 40s, both above average for this time of year. This combined with relative clear skies after some early fog and low winds made for a great day to help buds continue to develop. Bees had excellent conditions to fly to the few flowers that were presenting for pollination.

Bloom timing among the different varieties appears strong in the northern region. Nonpareil, Peerless, Aldrich, and Fritz cultivars appear to be overlapping nicely as bud development is in near lock step. Most all of the buds have broken through dormancy with nicely developed sepals being observed. Pink tissue is beginning to emerge out of the sepals at a similar rate for the above mentioned varieties. Carmel and Monterey appear to be a day or two behind Nonpareil with less pink tissue poking out of the sepals and a few more buds still dormant. As usual the early blooming Sonora variety is a few days ahead of Nonpareil with a few flowers beginning to present open for pollination. The late-blooming Butte and Padre are about four to six days behind the Nonpareil with the majority of buds still dormant. Warmer weather could advance the bloom at a rapid pace as observers reported significant changes throughout the day.

Most hives are placed and bee keepers should be done delivering bees soon. Maintenance of the orchard floor has begun with mowers running through orchards to keep grass down in between tree rows. Most pre-emergent herbicides have been applied. Orchards continue to be planted where ground has dried out enough to be worked. 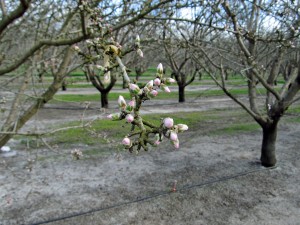 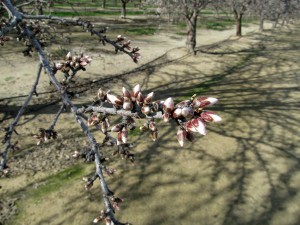 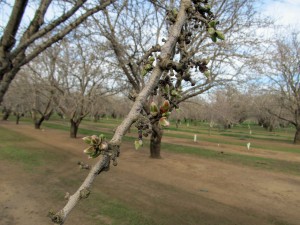