The photos accompanying this report show the diversity of bloom evident in the northern San Joaquin Valley. Our first image shows the advanced bloom of the Fritz variety near Newman, followed by a planting of the Independence variety under irrigation near Westley and finally, the bloom of the Aldrich, Nonpareil and Carmel, near Escalon.

Dry skies and above normal temperatures dominated the weather in the northern San Joaquin Valley over the weekend, pushing bud development ahead strongly. Patchy morning fog shielded the skies briefly each morning, with the densest cases along the east side of the region clearing by 10 am at the latest.  Morning minimum temperatures were widely reported in the lower 40’s with daytime highs reaching into the mid 70’s under high thin clouds. Winds were calm on Friday, but reach into double-digit speeds on Saturday afternoon and again briefly on Sunday. Observers noted 7 to 8 hours of excellent bee activity on each day.

The above normal temperatures experience over the past week have greatly accelerated the pace of bud development in the northern San Jan Joaquin Valley. While the bloom began at a comparatively normal timeframe, bud development has been progressing at a very brisk pace, producing an accelerated and very compressed bloom.

The most advanced orchards are found along the I-5 corridor on the west side of the valley, with plantings there running a day or two ahead of those closer to Highway 99 in San Joaquin and Stanislaus Counties. Meanwhile, the bloom is most delayed in the southern areas of the region near Merced.

While the early blooming Sonora is characteristically ahead of the Nonpareil, this year, many Fritz plantings are also blooming ahead of the Nonpareil, and in some cases lead the Sonora. Varieties within any orchard are well synchronized, presenting excellent overlap. However, there is some degree of variability between orchards, with some Nonpareil plantings presenting as much as 40% open bloom and others as low as 2% to 5%.

Observers have noted weaker bud sets in orchards that experienced the greatest degree of water and salinity stress during the 2015 growing season. However, most orchards are presenting strong sets and vigorous bloom. The compressed nature of the 2016 bloom is best noticed by the fact that many late-blooming Butte and Padre orchards are trailing the Nonpareil by only a few days. Most Butte plantings are presenting a significant proportion of their buds in the pink tip and popcorn stages, with the first open flowers also becoming visible throughout the region.

Growers have been taking advantage of the warm, dry conditions to complete necessary tasks in the orchards. Shredders could be seen grinding prunings in the last few orchards and mowers were observed in orchards were shredders had finished their work, mowing excess vegetation. Growers were also preparing sprayers for fungicide applications needed to prevent fungal development on the bloom. Crews could be found planting new orchards and installing irrigation systems. Finally, beekeepers continue to bring hives into the orchards, and servicing the hives delivered over the past few weeks. 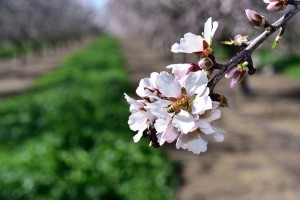 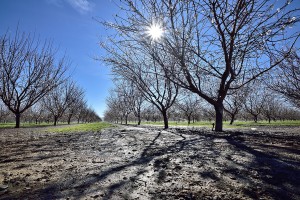 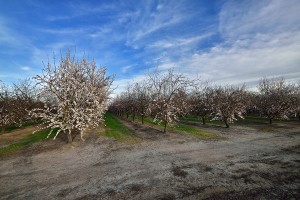