High, thin clouds covered the southern region over the weekend as the southern San Joaquin Valley experienced another few days of above normal temperatures. Early morning fog in Fresno, Kings and Tulare Counties gave way to temperatures in the low 70’s, while morning lows stayed in the low 40’s. Winds of up to 10 miles per hour on Sunday did little to deter the bee’s efforts as they worked the rapidly emerging bloom, and observers reported 7 to 8 hours of very good to excellent activity on each day in most areas. However, in areas of Tulare and Kern, which experienced a bit more fog during the early morning hours, bee activity was limited to approximately 6 hours after the skies cleared.

The bloom continues to develop rapidly in the southern San Joaquin Valley, under the influence of the warm daytime and mild overnight temperatures. While the region is as a whole running behind the northern San Joaquin, observers are reporting a wide range of variability from area to area. While difficult to determine, this may be the result of influences realized during the 2015 growing season, based on the degree of water stress and /or salinity.

As is normally the case, the Sonora variety leads the 2016 bloom and is followed in many plantings by the Aldrich and Fritz, which are running a day or two ahead of the Nonpareil. Observers have noted that Nonpareil plantings can be found with 5% to 75% open flowers. However, as shown in the values accompanying this report, the average value has just broken through the significant 10% point. As with the remainder of the Central Valley, late blooming Butte and Padre orchards are also moving quickly through the stages of development, with advanced examples of the Butte presenting a measurable percentage of flowers for pollination.

Beekeepers are making deliveries to the last of the orchards in the region, just in time for the bloom. Growers throughout the region are mowing vegetation, completing plantings and preparing treatments for disease control in susceptible varieties. Observers in Kern County have also reported a few orchards under irrigation as growers work to support the bloom and the subsequent crop. 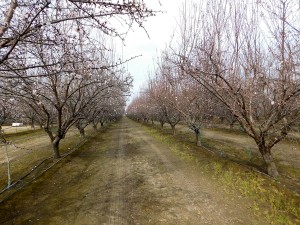 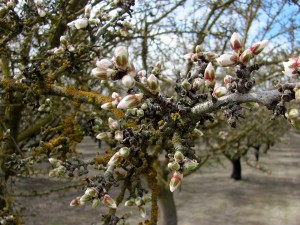 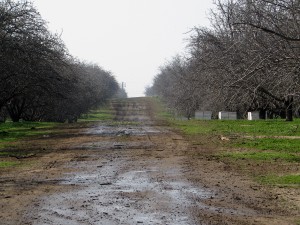