This report’s photos for the northern region present down-the-row shots of the Aldrich and Nonpareil near Durham in Butte County, followed by the more uniform bloom of the Independence and the characteristically early leaf emergence of the Winters, both in the Williams area of Colusa County.

Bright skies, accented with high, thin clouds covered the Sacramento Valley over the weekend as temperatures continued to climb well above seasonal norms. Morning low temperatures dropped only into the low to mid 40’s during the period, while daytime maximum readings reached into the low to mid 70’s. Winds reached into double digit speeds on Saturday and Sunday, but provided little hindrance to the bee’s efforts within the orchards. Observers reported 7 to 8 hours of very good to excellent activity on each day during the period.

Above normal temperatures have spurred bud development in the Sacramento Valley, generating a rapid progression of the bloom. Foothill orchards along the west side of the region continue to be the most advanced, owing to the lighter, gravely soils. Within the west side, observers are reporting quite a bit of variation in the stages of development. Orchards in near Orland are running slightly behind those in the Williams area, which are, in turn, running ahead of orchards in Solano County. Nevertheless, all are reporting that the pace of development has taken on almost hourly progression as the warm conditions push the trees along. As may be seen in the values accompanying this report, open flowers can be observed even in the late bloom Butte and Padre varieties, demonstrating the compressed nature of the 2016 bloom.

In addition to completing required orchard tasks, growers have also been preparing for rain forecast in the coming days. Some had begun treatments to prevent fungal development in susceptible varieties. However, increasing winds brought these operations to a halt in the windier areas of the region. Meanwhile, efforts to control excessive vegetation within the orchards continue, as flail mowers move through the fields. Growers want to maintain a clean orchard floor during and in the weeks following the bloom, which helps to maintain minimum temperatures above damaging levels.

High Temperature: 77°F
Low Temperature: 45°F
Wind: 2 to 5 mph in the morning in the South. 10 to 15 mph in the afternoon in the North
Sky Conditions: High, thin clouds
Bee Activity: 7 to 8 hours excellent activity
Current weather at the National Weather Service 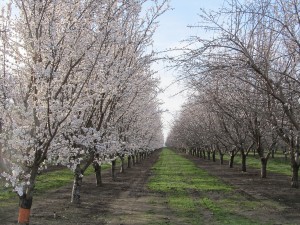 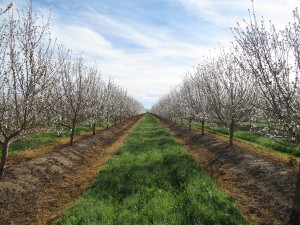 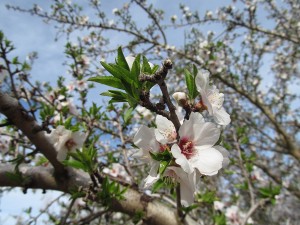