This report covers conditions and observations made on Wednesday, February 17, 2016.

Taken in Madera County, today’s photos for the southern region illustrate the bloom progression in different varieties. First, the bloom and petal fall stages in Sonora, followed by bloom in Nonpareil and the popcorn and bloom stage in the Monterey variety.

Overcast skies and windy weather interrupted the streak of sunshine in the South San Joaquin Valley. Overnight lows in the mid 50s gradually moved into daytime highs in the mid 60s. Dark skies and gusty winds gave bees little incentive to leave the hive resulting in a mere one to two hours of poor activity in spite of the warm temperatures.

Bloom continued to advance at a rapid pace in the southern region. The early blooming Sonora is likely at peak levels of pollination with around 80% of its flowers presenting. Nonpareil and it’s California-type pollenizers are less than a day behind and should achieve peak levels of open flowers no later than Thursday or Friday. Monterey and Carmel are both within a day of Nonpareil and should also reach the maximum number of open flowers by the end of the week. The later blooming Butte and Padre are moving quickly and are now presenting roughly one-fifth of their flowers for pollination with only a small amount of green tip being observed.

Growers with access to water continue to irrigate as trees will soon be pulling water from the soil. Final fungicide treatments were being made just prior to the impending storm. 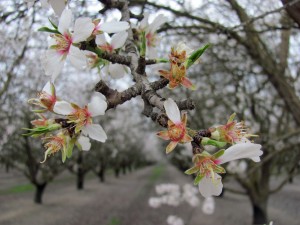 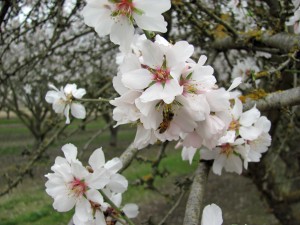 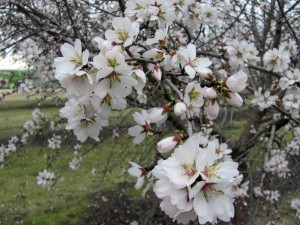