This report covers conditions and observations made on Wednesday, February 17, 2016.

Photos for today’s report show a down-the-row photo of the developing bloom in a Nonpareil and Monterey orchard in the Durham area of Butte County, followed by photos of the petal fall stage in the Winters variety and a down-the-row shot of a Winters and Nonpareil orchard on the eastern side of Colusa County.

After several days of sunshine and above-normal temperatures, storm clouds moved into the northern region Wednesday morning. Overnight temperatures remained in the upper 40s, with daytime temperatures reaching the low-to-mid 60s. Light winds were reported throughout the morning with isolated showers in the Northern Sacramento Valley. As the forecasted storm moved into the region, afternoon winds averaged 12 to 15 miles per hour, with peak gusts of 30 miles per hour. These conditions shortened bee activity as observers reported 4 to 5 hours of fair activity in the morning.

Bloom continued to make significant strides as the high winds accelerated petal fall in most varieties. The early blooming Sonora and Peerless varieties, along with Nonpareil and its California-type pollenizers, are beginning to show trace amounts of jacket stage. Nutlet development is still a few days away in earlier varieties, as the increase in petal fall has come from windy weather conditions as opposed to crop development.

High winds prevented any herbicide or fungal treatments from being made. Growers with access to surface water were able to irrigate as trees will soon be pulling moisture from the soil. 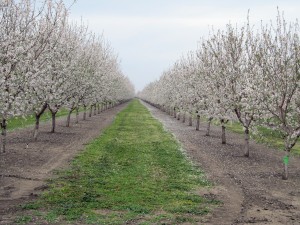 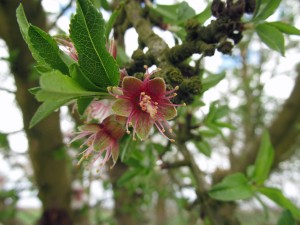 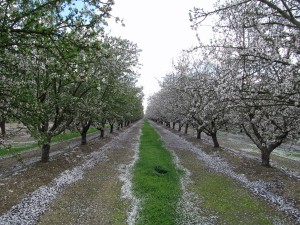