The photos for today’s report in the central region were all taken in Stanislaus County. The first photo shows a bee foraging for pollen in the Butte Variety in the Oakdale area, followed by photos of the petal fall stage in the Nonpareil and Aldrich varieties in Modesto.

Sunshine and slightly cooler temperatures covered the Northern San Joaquin Valley on Thursday. Overnight temperatures in the low 40s gave way to daytime highs in the low 60s. An early morning storm and daytime showers resulted in .5 to .75 inches of rain throughout the region. By early afternoon, dark clouds gave way to clear skies and allowed bees an opportunity for 3 to 4 hours of fair activity.

Petal fall is now well underway in the central region. As early blooming varieties reached or neared peak bloom, the high winds and rain associated with yesterday’s storm increased the rate at which flowers lost their petals. Due to the rapid progression of bloom and the results of the latest storm, Nonpareil, Monterey, and California-type pollenizers have all reached their peak bloom and are heading into the jacket stage.

With weekend temperatures forecasted in the mid 60s and low 70s, rapid bloom progression is expected to continue in the Carmel, Butte and Padre varieties, with earlier varieties progressing into and through the jacket stage.

Rain kept most equipment out of the fields. Growers without access to well water received welcome soil moisture and those who had been watering were able to turn their irrigation systems off. 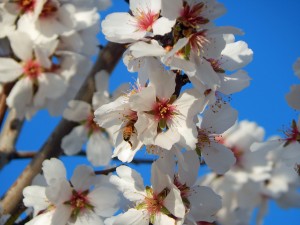 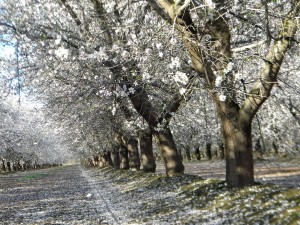 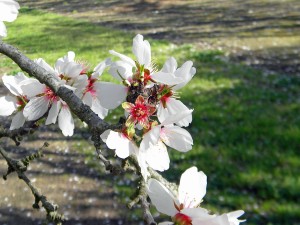 Jereme Fromm
KC Stone
Click an image to enlarge it.