Taken in the Chowchilla area of Madera County, the photos in today’s report show the advanced stage of bloom in the Nonpareil variety, followed by bloom in the Butte variety, and a down-the-row shot of a Nonpareil and Aldrich orchard.

Weather in the southern region remained relatively warm for this time of year. Daytime temperatures reached the mid 60s with morning lows dipping into the low 40s. The storm that passed through the northern and central regions left less rainfall in the south. Madera and Fresno counties received between 0.25″ and 0.5″ of rain, while most of Tulare and Kern counties received only an occasional daytime sprinkle.

Petal fall can now be seen in most orchards, due in part to the recent winds and rain. The early blooming Sonora variety has reached full bloom, and Nonpareil, Aldrich and Fritz are nearing peak bloom as well. Weather forecasts for the coming weekend call for temperatures in the mid to upper 60s. These temperatures are expected to push Nonpareil and its California-type pollenizers through peak bloom and into the jacket stage. Butte and Padre can approach peak bloom with these temperatures as well.

General orchard maintenance activities continue throughout the region. Growers with access to well water continue irrigation in areas that did not receive rain.

High Temperature: 64°F
Low Temperature: 42°F
Wind: 5 to 10 mph.
Rain: 0.25" to 0.5" in Madera and Fresno Counties. None to a few hundredths of an inch in Tulare and Kern Counties.
Sky Conditions: Partly cloudy.
Bee Activity: 6 to 8 hours of moderate activity.
Current weather at the National Weather Service 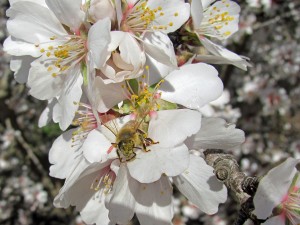 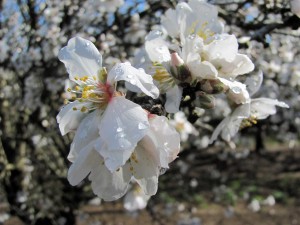 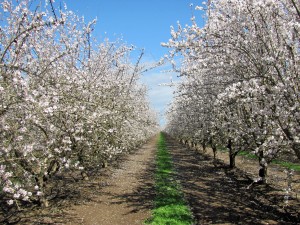