Taken in southern Kern County, the photos in today’s report illustrate the mowing of orchard grasses and leaves, the application of a pre-emergent herbicide spray and the developing buds in the Neplus variety.

The southern region has received above average levels of precipitation to date, allowing growers to give their agricultural wells a break after receiving little to no surface water last growing season. The winter weather has also provided ample chilling hours during the dormant period.

In areas where growers were able to get into their orchards in between storms, growers experienced more favorable weather for winter sanitation than last year. Growers were forced to use poles to knock mummies by hand in areas where heavier soil prevented them from getting mechanical shakers into their fields. Pruning and brush shredding activities took place as conditions allowed over the past few months.

Growers have worked quickly to wrap up herbicide and dormant sprays before hives are delivered to their orchards. With bloom right around the corner, bees can now be seen in fields along the 99 corridor through Bakersfield, and more will be placed rapidly throughout the south valley over the next week. Growers are paying close attention to weather forecasts during bloom, and are anxious to see how the El Nino weather system will affect pollination. 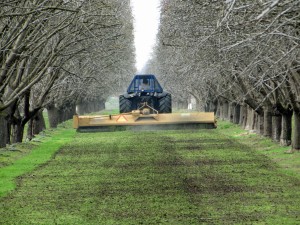 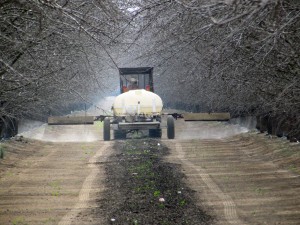 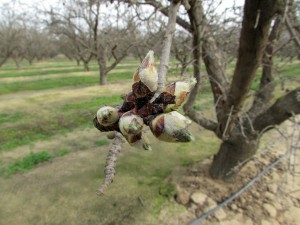