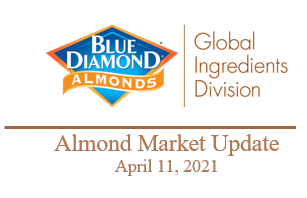 The March Almond Board of California shipments exceeded even the most bullish expectations. Shipments for March were 266.6 million pounds, the second-largest shipment month for our industry ever and larger than last March by 28%. Year-to-date shipments stand at 1.978 billion pounds, up 17.67% from YTD last year. The numbers are even more impressive considering the uncertainty of Covid’s impact on business and the logistical hurdles with the shipping issues impacting West Coast ports and shipping lanes worldwide. It’s an ongoing testament to the continued strong demand for almonds across the globe. The YTD increase has been driven foremost by India and China (including Vietnam), with an increase of approximately 158 million pounds of shipments compared to the same time last year. A substantial portion of this increase is in inshell shipments. Besides these impressive numbers in India and China, many other regions have also enjoyed notable increases with the EU, often considered a mature market, up 52 million pounds or 12% to last year. We also see new markets such as North Africa up over 18 million pounds or 60% and North Asia including Korea up 34%. North America is up a modest 19.9 million pounds or 3.75% even as it cycles past strong covid induced shipments spikes in March and April last year…[Read More]