This report’s photos for the southern region present the developing hull split of the Nonpareil and Independence varieties in the Traver area of Tulare County, followed by an orchard in the Firebaugh area of Fresno County beginning to show the signs of salt burn, caused by poor quality ground water.

Record, or near record heat dominated the first weeks of Summer in the southern San Joaquin Valley. Daily maximum temperatures during the first half of the month declined steadily from near 100 degrees in the opening days of the period, dipping into the upper 70’s and lower 80’s by mid-month. However, the arrival of Summer brought rapidly rising temperatures as a resilient high pressure system settled over the state, driving temperatures to as high as 106 degrees. Conditions were made a bit more difficult by increasing humidity, cast over the region as moist flows moved over the desert regions, farther to the south. Readings moderated slightly in the final days of the period, in time for the Independence Day holiday weekend. However, temperatures remained at uncomfortable levels, near 100 degrees. Morning low temperatures reflected the daily highs, with readings ranging from the mid 50’s at mid-month to the lower 70’s during the hottest days of the period.

Observers have reported that the hull split has begun in the advanced plantings of the Nonpareil and Independence varieties, indicating that the start of the 2016 harvest is just a few weeks away. Growers spent the past month working to meet their orchard’s moisture needs in the face of withering temperatures. While the regions orchards are in much better condition this year, benefitting from better winter rainfall and improved water availability in many areas of the region, orchards under varying degrees of stress can be found. As may be seen in the photo accompanying this report, in areas along the west side of the region where inadequate supplies of surface water force growers to rely on poor quality ground water, orchards are beginning to show signs of stress and damage from excessive salinity.

Growers spent the month preparing for the coming harvest, working to meet their orchards water requirements under the hot conditions and mowing excessive weed growth within the orchards. Fortunately, populations of web spinning mites have remained largely below damaging levels this year and widespread problems have been avoided. However, the initiation of the hull split also drives growers to begin treatments to control Navel Orange Worm as well as applications of bait formulations targeted to damaging ant species living in and on the orchard floor. This year’s high temperatures complicated work schedules during the period as growers struggled to balance their orchard’s water requirements against the need to manage pest populations, while striving to reduce the potential impacts of fungal growth on the splitting hulls. 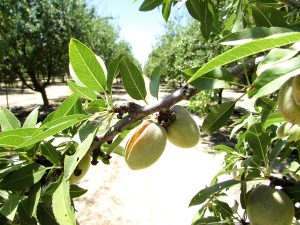 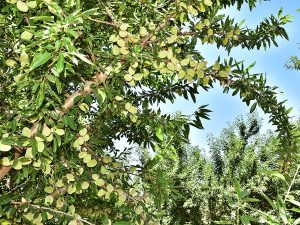 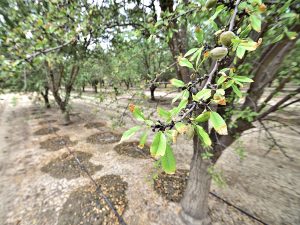 Matt Willson
Mel Machado
Click an image to enlarge it.