Taken in the Crows Landing area of Stanislaus County, this report’s photos for the central region show the hull split of the Nonpareil, the maturing Carmel and a down-the-row view of the Monterey and Nonpareil. Note the browning of the foliage in the third photo; salt damage from poor quality water.

Uncomfortably hot conditions reigned over the northern San Joaquin Valley during much of June, increasing water consumption within the orchards and the stress on the developing crop. Daily maximum temperatures were reported at their most comfortable levels early in the period, with readings dipping from the upper 90’s down into the upper 70’s by mid-month. Temperatures then climbed aggressively, reaching to and above 100 degrees until the end of the period. Uncharacteristically, the high temperatures were also accompanied by light winds of 5 to 10 mph on many days, which further increased water requirements in the region’s orchards. Morning lows provided only a modest break from the day’s heat, with readings reported predominately in the upper 50’s to mid and upper 60’s.

Hull split has begun in the northern San Joaquin Valley, heralding the approaching harvest. Observers have noted that hull split in the Nonpareil and Independence varieties can be found in all areas of the region, with the most advanced degree of maturity reported along the I-5 corridor in the west side of the valley.

Growers have been very busy, working to meet the orchard’s moisture requirements, which have been driven higher by the hot conditions while performing other necessary tasks. Growers find themselves working a fine balance. In order to reduce the impact of fungal infections on the splitting hulls, growers typically reduce water applications to one-half of the tree’s consumptive use for a two-week period at the initiation of hull split. However, the high temperatures have made this a sensitive proposition as the conditions drive water needs higher. As a result, growers find themselves working to balance the desire to reduce the potential of fungal infections against increasing stress imposed by the heat.

While the region’s orchards have generally been in very good condition this year, plantings around the region can be found under increasing stress. In the most extreme conditions, leaves have wilted and withered, and the nuts themselves have become more pliable as water stress increases. Irrigation timing has been complicated by the need to complete other orchard operations. Ant bait applications, hull split treatments to control Navel Orange Worm and weed control must all be worked into irrigation schedules so that these critical tasks can be completed in a timely manner.

Growers along the west side of the region are predicting that they will start shaking the first orchards between the 20th and 27th of July. 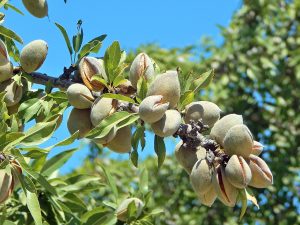 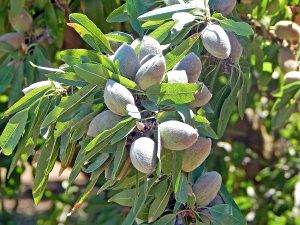 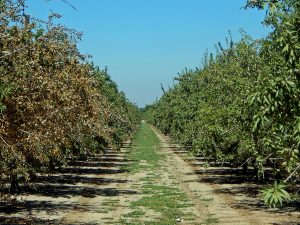