Taken in the Modesto area of Stanislaus County, this report’s photos for the central region present the developing nuts of the Nonpareil and Butte varieties, as well as a Nonpareil/Sonora planting under micro-sprinkler irrigation.

Conditions varied widely during May in the Central Region, with rain in the first week of the period and record setting high temperatures in the period’s final week. Rain fell across the region on May 6th, brought in by a cut-off low that dropped from trace amounts to as much as one-half inch in official reports. However, growers also reported heavy downpours from localized cells that dropped as much as one inch in the heaviest locations. Daily maximum temperatures cycled between in the lower 60’s and lower 90’s during the first half of the month, then rose steadily to as high as 105 degrees during the final days of May. Morning minimum values were also reported at comparatively warm levels, with readings ranging between the lower 50’s and lower 60’s throughout the period.

Observers are reporting that the developing crop in the central region is progressing well and the orchards are in generally good condition. Nuts of all varieties are now fully solidified and the trees are showing the weight of the developing crop. Nearly all orchards are also displaying significant amounts of new growth, a sign that growers have met their orchard’s nutrient and water requirements. However, while the vast majority of the region’s orchards are in good condition, growers’ dependent on ground water of poor quality still face problems and their orchards are once again beginning to show signs of excess salinity or high pH water. This is particularly the case in areas served by the Federal Central Valley Project, where allocations of surface water have been limited to 5% of contracted amounts. While the rain that fell early in the period created significant difficulties for cherry growers in San Joaquin and Stanislaus counties, almond growers had little cause for immediate concern. However, the rain does increase the potential for Scab and Rust, fungal diseases that can cause serious defoliation later in the season.

Growers have been monitoring insect populations and life cycles within their orchards closely. Some have opted to treat for Navel Orange Worm as a “May spray” treatment, aiming to reduce the population below economic levels and reduce impacts on the crop at hull split. Others will treat a hull split, now just three to four weeks away. Meanwhile, irrigation and weed control continue to be prime activities throughout the northern San Joaquin. Both have increased in intensity as the temperatures rise and water requirements increase. 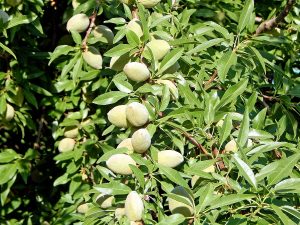 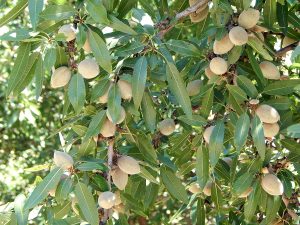 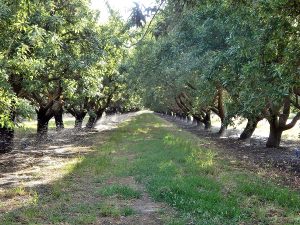