This report’s photos for the northern region present the developing nuts of the Nonpareil, Aldrich and Butte, all in the Durham area of Butte County.

Conditions varied significantly in the Sacramento Valley during May, reflecting the effects of cut-off low pressure systems that brought rainfall to the region, followed by high pressure that promoted near record temperatures throughout the Central Valley. While daily maximum temperatures in the first half of the period spent much of the time between the lower 80’s and mid 90’s, readings between May 5th and 8th dipped into the lower 60’s as a rain fell across much of the region. Temperatures fell again on the 20th as a second system swept across the Valley, bringing rainfall totals for the period to as much as an inch in the wettest locations. Temperatures turned abruptly more summer-like during the final week of the period when a stubborn high pressure settled over the state, driving readings over the 100-degree mark for the first time this year. Morning low temperatures followed the pattern established by the afternoon maximums, with readings ranging from the lower 50’s to low and mid 60’s.

Crop development continues in the Sacramento Valley. While some have noted that development is running behind last year’s particularly accelerated pace, the crop nevertheless remains on a “normal” schedule. Orchards display strong growth rates and observers have noted that nuts in all areas are now fully solid. While the trees are carrying their heaviest weight of the year, observers have reported that there are no serious issues with broken branches and that the orchards are carrying the loads well.

Growers have been monitoring orchards closely with an eye towards hull split, just a few weeks away. Many sustained significant damage caused by Navel Orange Worm in the 2015 crop and are planning on employing the best possible controls for eliminating a repeat of last year’s problems. Better mummy shaking conditions over the past winter will certainly help, by reducing the number of worms over-wintering in the orchards. However, all in the region are monitoring the insect’s life cycle closely, aiming to target required treatments to the most effective timing as the hulls begin to split and the crop becomes the most vulnerable.

Owing to the geography of the region, growers in the Sacramento Valley are enjoying adequate supplies of water needed for irrigation this year. Growers will continue to irrigate normally, up to the initiation of the hull split. Weed control and irrigation will dominate grower’s activities over the coming month as they work to meet their orchards needs during the summer heat. 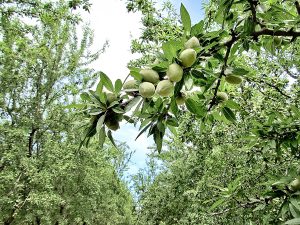 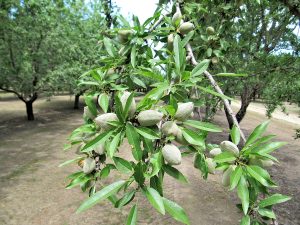 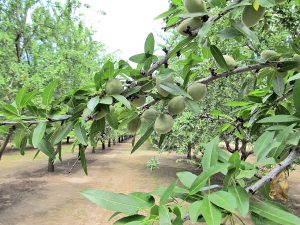