Our photos for the southern region present the developing nuts of the Sonora near Buttonwillow, the Fritz near Delano and an example of a grower’s pumping plant near Shafter.

The southern region experienced a wide range of weather during May, from locally heavy rain early in the month to near record temperatures in the period’s final week. Daytime highs dipped from mid-80’s as the period began, down into the low to mid-60’s as a cut-off low spread clouds and moisture over San Joaquin Valley. While much of the region failed to receive any rainfall, growers along the west side reported from trace amounts to as much as an inch of rain from localized heavy showers. Following the rainfall, temperatures rebounded into the low to mid 90’s, then dipped briefly back into the lower 70’s as another, weaker system passed over the region. Condition’s finally turned toward more summer-like conditions during the final week of the period as high pressure forced temperatures above the 100-degree mark for the first time this year. Morning lows followed a more stable pattern ranging from the lower 50’s to lower 60’s throughout the period.

The 2016 crop continues its steady development in the southern San Joaquin Valley. Observers are reporting that the vast majority of orchards are in very good condition and presenting new growth, reflecting the benefits of good winter rainfall and adequate irrigation supplies. Nevertheless, problems can still be spotted along the west side of the region in orchards that have endured stress from poor quality or inadequate water in past years. Observers in the most severely impacted areas have noted evidence of salt burn and reduced vigor as growers are once again forced to irrigate with poor quality groundwater. Growers drawing water from the Federal Central Valley Project are the most dependent on groundwater since allocations of surface water have been limited to 5% of contracted amounts.

Growers have noted that kernels of all varieties have become fully solid and that the shells within the nuts have hardened enough to all but eliminate susceptibility to damage from Leaf-Footed Plant Bugs. The weight of the crop is now easily seen as branches bow under the burden of the nuts, which are now at their heaviest stage of development.

Growers and their Pest Control Advisors have been monitoring insect populations within the orchards closely. Some treated for Leaf-Footed Plant Bugs while others have opted to treat for Navel Orange Worm, aimed at reducing damage to kernels when the hulls split in approximately 4 weeks. Increasing populations of web-spinning mites have been reported. However, observers have not noted any treatments as of yet. Growers are reluctant to initiate treatments solely for mites, opting to let predators within the orchards control the pest species for as long as possible. As the crop moves towards hull split, growers will continue to monitor their plantings while providing water and fertilizer to support the developing crop. 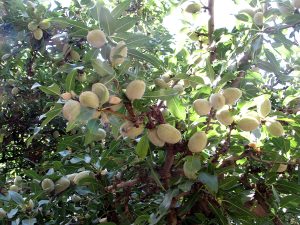 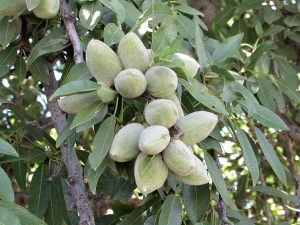 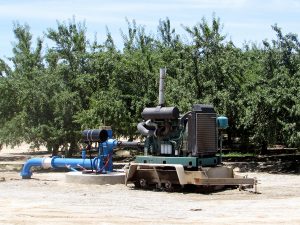