The photos for this southern region report include shots of a rain soaked orchard near Chowchilla, an orchard damaged by strong winds in Tulare County and the crop knocked from the trees in a planting near Shafter, in Kern County.

Mild to warm conditions reigned over the southern San Joaquin during much of April. However, periods of rain and blustery winds also impacted the region, soaking orchards and blowing over trees in some areas. Daily maximum temperatures in the opening days of the period and at mid month reached into the mid and upper 80’s in the warmest areas of the region. Meanwhile, readings topped out in the upper 60’s to lower 70’s between the 8th and 16th and again in the period’s final week as more inclement conditions prevailed. Morning low temperatures were widely reported between the upper 40’s and upper 50’s throughout the period.

As shown in the photos accompanying this report, winds that accompanied the stormiest days of the month, when as much as 1.5 inches of rain was reported, created problems for some growers. In the southern areas of the region, winds that were reported in excess of 40 mph in areas of Tulare and Kern counties knocked nuts to the ground in many orchards and blew over trees in older plantings. While inflicting serious damage to the impacted orchards, the damage to the crop as a whole did not reach significant levels. Meanwhile, thunderstorms in the northern areas of the region during the last week of the period dropped hail and locally heavy rain in areas of Madera County. While accumulations were fairly impressive, observers have reported little to no damage to the crop.

Observers have noted that while the conditions described above provided challenges for some areas of the region, the normal phases of crop development continue. Nuts are now fully sized and beginning to solidify; those that trees are unable to carry to maturity have been shed to the ground. Growers have been busy mowing vegetation within the orchards and irrigating as needed, working to avoid the windiest days to prevent blown-over trees. Some growers have also taken advantage of the calmest days to complete treatments to control Peach Twig Borer and Navel Orange Worm as determined by trapping to monitor the insect’s life cycles. Treatments have also been made in plantings where populations of Leaf-Footed Plant Bugs have built to damaging levels. Some growers have also begun treatments to control rust and scab, which can arise as a result of the damp conditions experienced during the month.

Observers have reported that orchards in areas that exhibited the greatest degree of stress from lack of water and/or excessive salinity over the past year have recovered well and are presenting new growth. While crop loads are running below normal, the rain received during the past winter appears to have aided these plantings and allowed them to recover somewhat from the adverse effects they have endured. Increased allocations of water in some areas of the region may provide additional relief as growers blend ground water with better quality water from surface deliveries. However, given that allocations from the federal Central Valley Project remain at 5% of contracted amounts, many growers remain largely dependent on groundwater of questionable quality. As a result, impacts on orchards in these areas can be expected to continue. 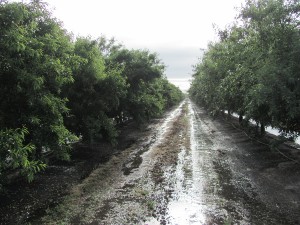 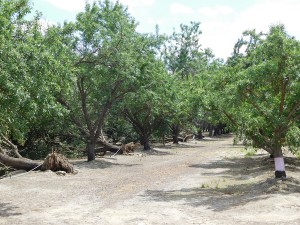 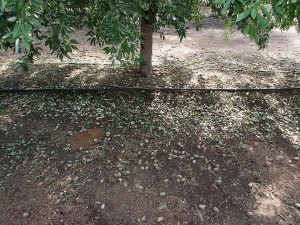