Taken in Stanislaus County, this report’s photos for the central region show an orchard receiving its critical post-harvest irrigation, a crew gathering brush and setting it for the shredder and one of the orchards being removed after 23 years of production.

While October brought the first rainfall of the season to the northern San Joaquin Valley, weather conditions during the period provided ample opportunities to complete the 2016 harvest. Daily maximum temperatures dipped into the mid 60’s in the period’s opening days, then climbed to their peak values in the upper 80’s and lower 90’s by the 9th and 10th of the month. Readings then settled back into the 70’s and 80’s for the balance of the period, even as the first storm of the season delivered 0.1 to 1.0 inch of rain between the 14th and 16th of the month. Morning lows were widely reported between the mid 40’s and mid 50’s during the period. except during the storm’s passage when reading reached into the upper 60’s, reflecting the warm nature of the storm.

Very favorable weather during the period’s first weeks allowed growers to complete the northern San Joaquin Valley’s fastest harvest in anyone’s memory. At this point, only a few late maturing Fritz plantings remain to be picked up and we are now pronouncing harvest operations to be complete. Rain that fell over the region failed to hinder the harvest. Growers with the latest maturing Fritz plantings largely left the crop in the trees, opting to shake after the rain had passed. These growers are now working to bring the crop in, most of which will require some degree of drying in order to be safely stored.

Post-harvest tasks now dominate grower’s activities. Critical post-harvest irrigations have been completed, though at least one irrigation district has opted to make water available through October, allowing growers to ensure their orchards have adequate soil moisture. Pruning and fertilizer applications, via soil and foliar methods are being conducted, as are applications of soil amendments such as gypsum designed to improve water penetration. Also, as shown in the accompanying photo, older, lower producing orchards are being removed and the lands prepared for replanting.

Huller/sheller operators are now focused on previously stockpiled product and are working complete their operations by the first of December. 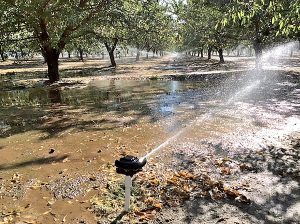 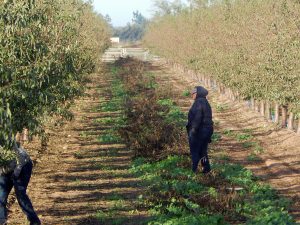 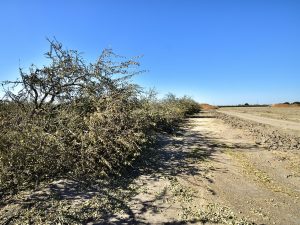 KC Stone, Jereme Fromm and Mel Machado
Click an image to enlarge it.