Our photos for the northern region’s final report of the year show the first pruning of a new orchard in Colusa County, where the grower is “training” the tree’s structure, followed by the brush remaining after a light pruning in a producing orchard and individual trees being removed in an orchard in Butte County.

Sacramento Valley growers enjoyed generally mild conditions for much of the period, with ample time to complete the 2016 harvest. Daily maximum temperatures were reported at their lowest values in the low 60’s early in the period, with the highest values coming just one week later when readings reached into the upper 80’s to lower 90s. Temperatures moderated for the balance of the period, varying between the upper 60’s and lower 80’s, even as the first storm of the season dropped from 0.5 to 1.0 inch of rainfall throughout the region. Morning lows exhibited a bit more stability, with readings reported predominately between the mid 40’s and mid 50’s throughout the period.

Harvest operations have been completed in the Sacramento Valley. Weather conditions throughout the harvest season provided growers with ample opportunity to bring in their crops this year, with rainfall holding off until all but the last of the late maturing varieties were removed from the orchards. As may be seen in the accompanying photos, growers are pruning and removing trees or entire orchards, in addition to fertilizing and completing post-harvest irrigations. While the harvest has just been completed, some post-harvest tasks are designed to aid the next crop and it’s harvest ten months from now. Smoothing orchard floors and applications of herbicides are both designed to facilitate the next harvest. While growers work within existing orchards, they have also been putting the finishing touches on lands being planted to new orchards. Irrigations systems have been installed and the land prepared to receive new trees during the winter dormant period.

Huller/sheller operations are also winding down. Larger operations with the greatest amount of stockpiled product are expecting to finish their work by the end of November. 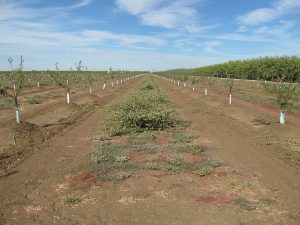 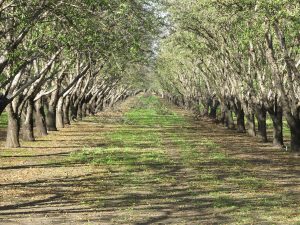 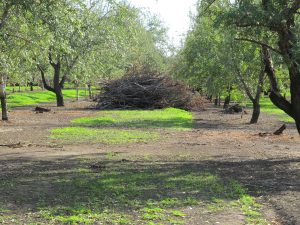