This report’s photos for the southern region present a harvester picking up the crop in the Chowchilla area of Madera County, followed by a shuttle loading the crop into trailers and an excavator pulling trees, both in Tulare County.

Clear skies covered the southern San Joaquin Valley, excepting days when smoke from fires in the surrounding mountains moved over the valley. Temperatures followed a reoccurring pattern during September, as the southern region transitioned into fall.  Both the daily high and the overnight lows varied on a ten-day pattern, with the maximum readings dipping to the mid and upper 70’s, then rising slowly to peak in the mid and upper 90’s. Morning lows followed the same pattern, ranging between the low to mid 50’s and low to mid 60’s.

Harvest operations in the southern San Joaquin Valley are entering their final stages. As noted in last month’s report, growers moved quickly through their Nonpareil plantings and in many cases immediately shook their respective pollinizers.  The accelerated maturity observed in the Nonpareil this year has also provided for a rapid harvest of the pollinizers and as the period concludes, observers have reported that most growers have completed their harvest. With few exceptions, only Fritz and Monterey remain to be harvested and observers are reporting that all harvest operations in the orchards should be completed by mid-October, barring any adverse weather. With the rapid pace of harvest, much of the crop has been diverted to stockpiles found throughout the region, both at sheller facilities and on lands adjacent to the orchards where the crop was produced.

Yields in the southern San Joaquin have generally been reported at levels above those experienced in 2015. Quality levels are also generally running higher than a year ago, with reject levels caused by Navel Orange Worm and ants slightly below last year’s levels.

As growers finish the harvest, post-harvest activities move to the forefront. Re-leveling orchard floors, applying fertilizer and soil amendments and critical post-harvest irrigations have become normal tasks. Growers have also begun pruning and shredding brush, operations that will continue into the winter. As shown in the photo accompanying this report, heavy equipment can also be found pulling trees in orchards scheduled for removal. After the trees have been pulled, large chippers are brought in to reduce the trees to finger-sized chips. These chips have historically been trucked to “co-gen” facilities where the biomass is used to generate electricity. However, in recent years, utility companies have opted to produce electricity using natural gas at lower costs. As co-gen facilities have been forced to shut down, this has driven the cost of orchard removal much higher, with prices now quoted in excess of $750 per acre. Regulations do not allow for open air burning of the trees, forcing growers to incur very high costs to remove old, low producing orchards. 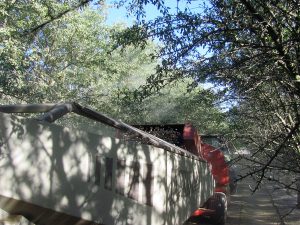 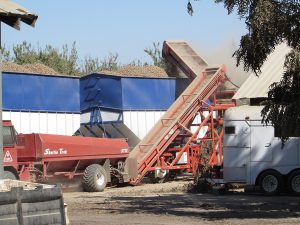 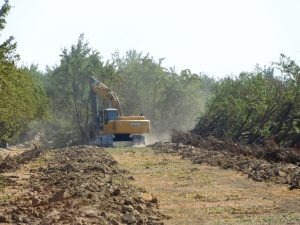