Taken in San Joaquin County, this report’s photos for the central region show the well-developed hull split of the Padre, a windrow of the Aldrich waiting for the harvester, and an example of the defoliation caused by increasing populations of web-spinning mites, in this case on the Carmel.

Seasonably warm temperatures dominated the weather in the central region during August, providing good conditions for the 2016 harvest. Daily maximum temperatures ranged from the lower 90’s to just over 100 degrees for the majority of the period, with more mild readings in the lower 80’s to lower 90’s reported in the final week of the period. Morning lows reflected the daily highs, with readings widely reported between the mid 50’s and lower 60’s.

Harvest operations have progressed smoothly and rapidly throughout the central region, allowing many to complete harvesting the Nonpareil with no difficulty. While the majority have paused to irrigate their orchards after picking up the Nonpareil, advanced maturity in many plantings has inspired a number of growers to forego an irrigation and immediately shake the next variety. Consequently, some growers have completed their harvest and are now irrigating. Huller/sheller operations are processing crop receipts quickly, However, stockpiles of Nonpareil can be found at sheller facilities waiting to be shelled as growers turn their attention to the balance of their varieties. As previously noted, pollenizer varieties are maturing quickly and as this report is being prepared, the first Monterey plantings have already been shaken. Some are anticipating that the most advanced Fritz plantings along the west side of the region will be shaken within the next week. As expected, yield levels of the Nonpareil are running generally stronger than reported in the 2015.

Observers are reporting that the number of orchards impacted by web-spinning mites has increased in recent weeks, with the most serious infestations defoliating trees in all areas of the region. Growers are generally powerless to control these populations at this point in the growing season and must endure the increasing damage. In some cases, the level of defoliation is exacerbated by infections of Scab and/or Rust. While reject levels are running lower than last year, some growers are still reporting higher than desired damage levels. Some believe that the heat waves experienced during July complicated the timing of hull split treatments for Navel Orange Worm, reducing effectiveness and creating additional opportunities for damage. 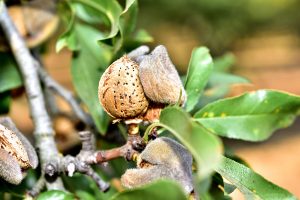 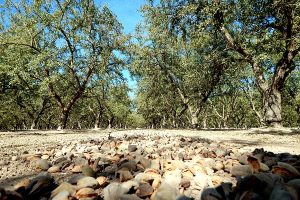 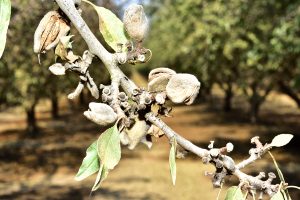 Mel Machado and Jereme Fromm
Click an image to enlarge it.