This report’s photos for the southern region show a windrow of the Nonpareil waiting to be picked up near Madera, followed by a harvester picking up the crop and a shuttle cart loading a trailer in the Three Rocks area of western Fresno County.

Hot, dry conditions reigned over the southern San Joaquin Valley during August, driving the maturing crop towards harvest. Daytimes temperatures were consistently reported between the lower 90’s to just over 100 degrees throughout the period, with mildest temperatures reported in the period’s final week. Morning lows were fairly static during the month, with readings widely reported between the mid 50’s to mid and upper 60’s.

Observers are reporting that the 2016 harvest is progressing quite rapidly in the southern San Joaquin.
Shakers are moving quickly from orchard to orchard in rapid succession and nearly all of the Nonpareil has been shaken as this report was being prepared. Growers with Price and Sonora varieties have been faced with a decision to immediately shake their pollinizers and risk drying out the orchard, or irrigating after picking up the Nonpareil and risk further exposure to Navel Orange Worm. In any event, growers are now focusing their attention on the pollenizer varieties with some reporting that the only restriction is the availability of equipment to complete the work. Observers are reporting that all varieties are now being shaken, with the exception of the traditionally last-to-harvest Fritz, which many are expecting to starting shaking within the coming week. Stockpiles of Nonpareil are building at shellers around the region. These piles will be run later in the season as soon as harvest operations have been completed in the orchards. Growers are reporting that yields of the Nonpareil are running ahead of last year’s level, as was expected.

Populations of web-spinning mites, noted in previous reports have increased under the influence the hot temperatures. Observers are reporting that a considerable number of orchards throughout the southern region have experienced damaging populations and significant amount of defoliation. Growers are hopeful that the reduced temperatures experienced in the closing days of the period, along with increasing morning dew will help to slow mite development enough to allow predators to regain some measure of effectiveness. Observers have also noted variable levels of damage by Navel Orange Worm. While damage is on average running below last year’s levels, some growers are experiencing elevated damage levels, while other are reporting few difficulties.

Over coming weeks, growers will rush to bring in the crop as quickly and as efficiently as possible, hoping to avoid any rain that may pass over the valley. 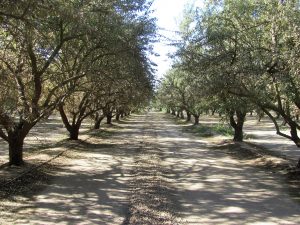 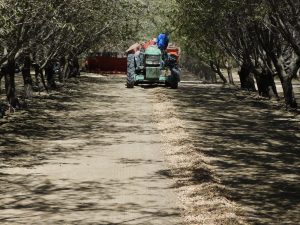 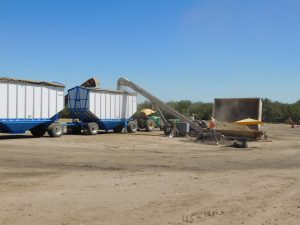