This report covers conditions and observations made on Tuesday, February 16, 2016.

Nonpareil and its California-type pollenizers are approaching peak bloom as flowers have opened rapidly over the past 36 hours. The warm temperatures have also accelerated bloom in the later blooming Butte and Padre varieties as they are now showing a substantial number of flowers presenting for pollination throughout the region. The Sonora and Peerless varieties have likely achieved peak numbers of flowers presenting for pollination, and measurable petal fall is being reported along with traces of flowers that have lost all of their petals.

With rain in the forecast for Wednesday and Thursday, growers have worked hard to get fungicide treatments across their orchards using both air and ground applications. Many growers are also putting out fertilizers so that they can be incorporated into the soil with the upcoming precipitation. Rainfall and strong winds may accelerate petal fall in earlier blooming varieties, and growers are waiting anxiously to find out the severity and impacts of the upcoming weather. 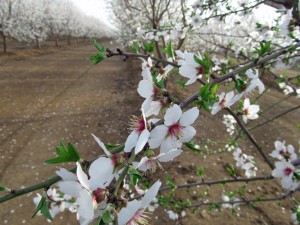 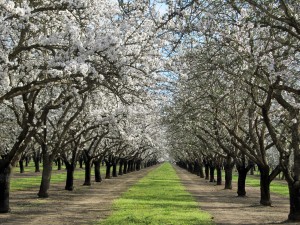 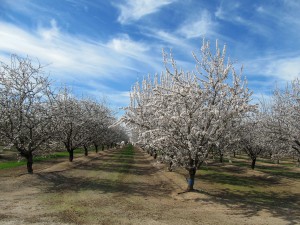