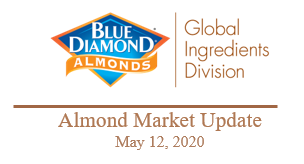 Export market attention is appropriately focused on India. Shipments to India for the month of April are down substantially from same time last year. April shipments to India were 6.2 million pounds compared to over 13 million pounds last year. This decrease is driven by the Covid-19 lockdown in March. When India instituted a shut down of services, commerce came to a standstill. Despite proclamations essential services could continue there was confusion in enforcement. A number of India buyers were unable to get workers to their factories and the congested port situation resulted in a significant slow down of shipments from California during the month of April. Consequently, the India almond market will be tighter on supplies in the coming months. This will contribute to clearing the current market situation and present opportunities for buyers to recover from the chaos over the last two months. Since mid-April, there is progress in clearing product from the ports and getting the factories on line. Local transportation is also resuming, with trains and buses now running again. Slowly, the market is clearing goods in the supply chain pipeline…[Read More]