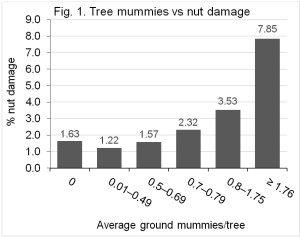 Navel Orangeworm (NOW) is a primary pest of almonds, pistachios, and walnuts, with other significant crops hosts such as fig, citrus, pomegranates. This pest was first introduced in southern California in 1942 potentially from Central and/or South America. Because of the wide host range, this pest was quickly spread to the entire Central Valley within 5-7 years of its first introduction, established and had become a major production threat in almond and other nut crop production.

Adults are greyish-brown moths (about ½ inch long) with grey markings on wings. Eggs are laid in mummy nuts or in the nuts with initiation of hull-split. Tiny first instar larvae bore into the nutmeat and all stages of larva feed on nuts producing large amount of webbing and feces (i.e. frass). Larvae are white to pink with a reddish-brown head, and with a typical crescent-shaped markings on the second segment of the body just behind the head. The mature larvae (5th instar) can grow upto ¾ inch in size. Besides direct damage on nuts, NOW larval damage can lead to fungal infections, such as the mold that produces aflatoxin, known to cause carcinogenic and mutagenic effects on human. The larvae overwintered in mummy nuts that are in trees or on the ground.

Among non-chemical ways of reducing NOW populations or damage include early harvest and winter mummy removal (i.e. sanitation).  Winter Sanitation of orchards during the winter is the most effective way to reduce the damage in upcoming season. Mummy nuts should be removed from the trees before bud swelling stage (late January/early Feb.) by shaking the trees or by hand polling. The nuts should then be destroyed on the orchard floor by discing or flail mowing by March 15. UC IPM recommends less than 2 mummy nuts per tree by Feb. 1 in Sacramento Valley, and less than that in San Joaquin Valley. A recent study published in Cal. Ag. (by Higbee and Siegel) showed that in the San Joaquin Valley, these thresholds might need to be lowered in otder to bring the nut damage level to 2% (See Fig. 1&2). Based on that study, ≤ 2% damage level can be achieved by reducing the average tree mummies to 0.2 per tree (i.e., 1 mummy per 5 trees), with an additional threshold of 4 ground mummies per tree after mummy destruction by flail mowing. Although the study was based on the southern part of San Joaquin Valley (Kern County), we can use this information as a reference and modify as needed for other parts of the State. Regardless of what extent we can implement these thresholds in our individual orchards, it is clear that winter sanitation should be a significant part of effective NOW management in almonds…. [Read the full article here]