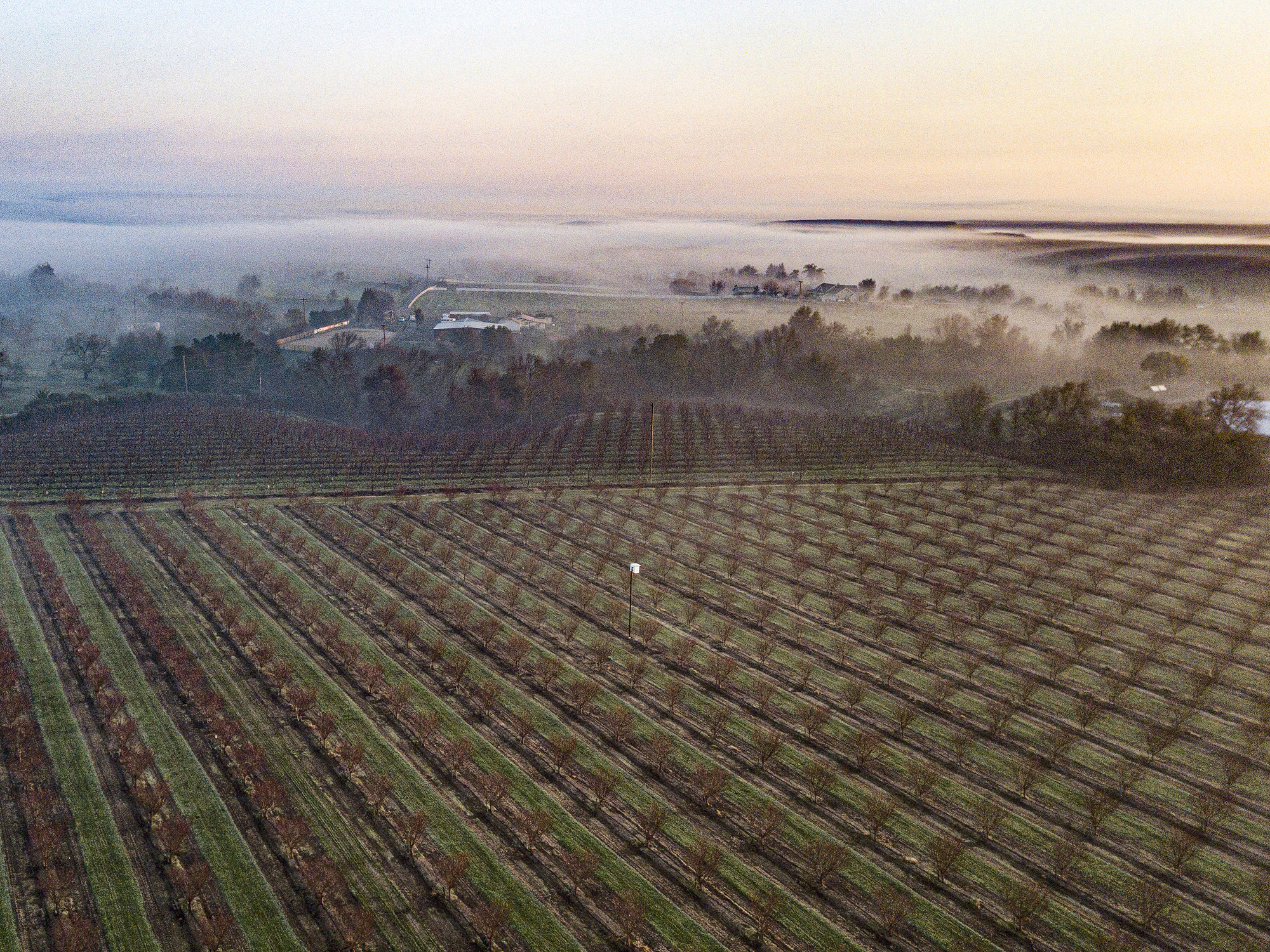 This report covers the conditions and activities observed prior to the start of the 2022 bloom. We anticipate starting regular weekly bloom reports during the week of February 6, 2022.

The winter of 2021/22 has been one of extremes. Following the significant October rains that dampened the last phase of the 2021 harvest, little rain or mountain snow was received for several weeks. However, conditions turned very wet at mid-December with the arrival of an atmospheric river that delivered record rainfall accumulations to the Valley and more importantly, heavy snow to the Sierra Nevada watershed.

In stark contrast, January has been dry with no significant rainfall reported. As a result of the December storms, precipitation levels in most areas of the Valley range from 100% to 130% of seasonal average for the current date, and at the same time, as little as 40% of the average for April 1. Snowpack levels in the Sierra Nevada mountains paint a similar picture, with mountain stations reporting 100% of the average for the current date, but as little as 55% of the April 1 average.

Temperatures during January have also run towards both ends of the normal spectrum. Foggy nights and mornings have returned to the Valley, more so than in many years. And while morning temperatures have dropped to the upper 20’s and lower 30’s on quite a few mornings, bright sunshine has been driving afternoon temperatures into the mid-60’s, with the radiant heat of the sun making it feel even warmer. Reservoir levels have been rising slowly, under the influence of the afternoon temperatures, with most running from 40% to 65% of capacity and 50% to 75% of historical average. Weather forecasts for the coming weeks are also offering little promise of relief. Obviously, water supplies for the upcoming growing season will be tight absent additional rain and snow for the remainder of the winter and spring.

Growers spent the winter months preparing for the upcoming bloom. Pruning, shredding of the resulting brush, weed control and pest management are just a few of the many orchard tasks that take place during “the dark of winter”. The more prevalent fog has provided greater opportunities to shake and mow mummy nuts this year. Orchard sanitation, where mummy nuts are shaken, swept into windrows and destroyed using flail mowers forms the basis of a sound Navel Orange Worm management program and is critical for proper control. Some growers have also been completing late-season, delayed-dormant treatments, intended to reduce over-wintering insect and disease levels within the orchard. Removing older, low producing orchards is now a year-around job, as is the planting of new or replacement orchards. However, those using dormant, bare-root trees have been working to complete planting operations before the trees break dormancy and begin to grow.

Growers have noted sharp increases in the costs of crop inputs over the past few months. Fuels, fertilizer, labor and chemical costs have all increased significantly, driving growers to re-evaluate normal practices. Resource availability is also a prime consideration with growers, Pest Control, and Crop Advisors reporting that some input materials may not be available at any price. Many have expressed concern about their abilities to provide proper support for crop development during the coming growing season. Supplies of irrigation water are also included in the list of limited resources, given the reservoir levels and weather forecasts noted above. The lack of rainfall during January has hindered growth of cover crops in orchards unable to provide supplemental water, while those with water available could be seen irrigating their orchards during the past week to improve moisture levels within the root zone.

Beekeepers have begun delivering hives to the orchards. Many hives can also be observed in “bee yards” in all areas of the Valley, having been staged there upon arrival and prior to delivery to the orchards. Growers have also been placing water buckets for the bees as they arrive in orchards without natural water sources available.

Observers are reporting that buds in all varieties are swelling and preparing for the bloom. As may be seen in the photos accompanying this report, buds of the early blooming Sonora variety are moving into the green tip stage, followed closely by the Nonpareil and several others. Observers are reporting that varieties appear to be well synchronized, providing the potential for good bloom overlap. Occasional rogue open flowers can be spotted in the Sonora variety, a habit of this variety that begins about two weeks prior to the start of the bloom. Observers have noted that they expect the first measurable proportion of open flowers will appear during the week of February 6. 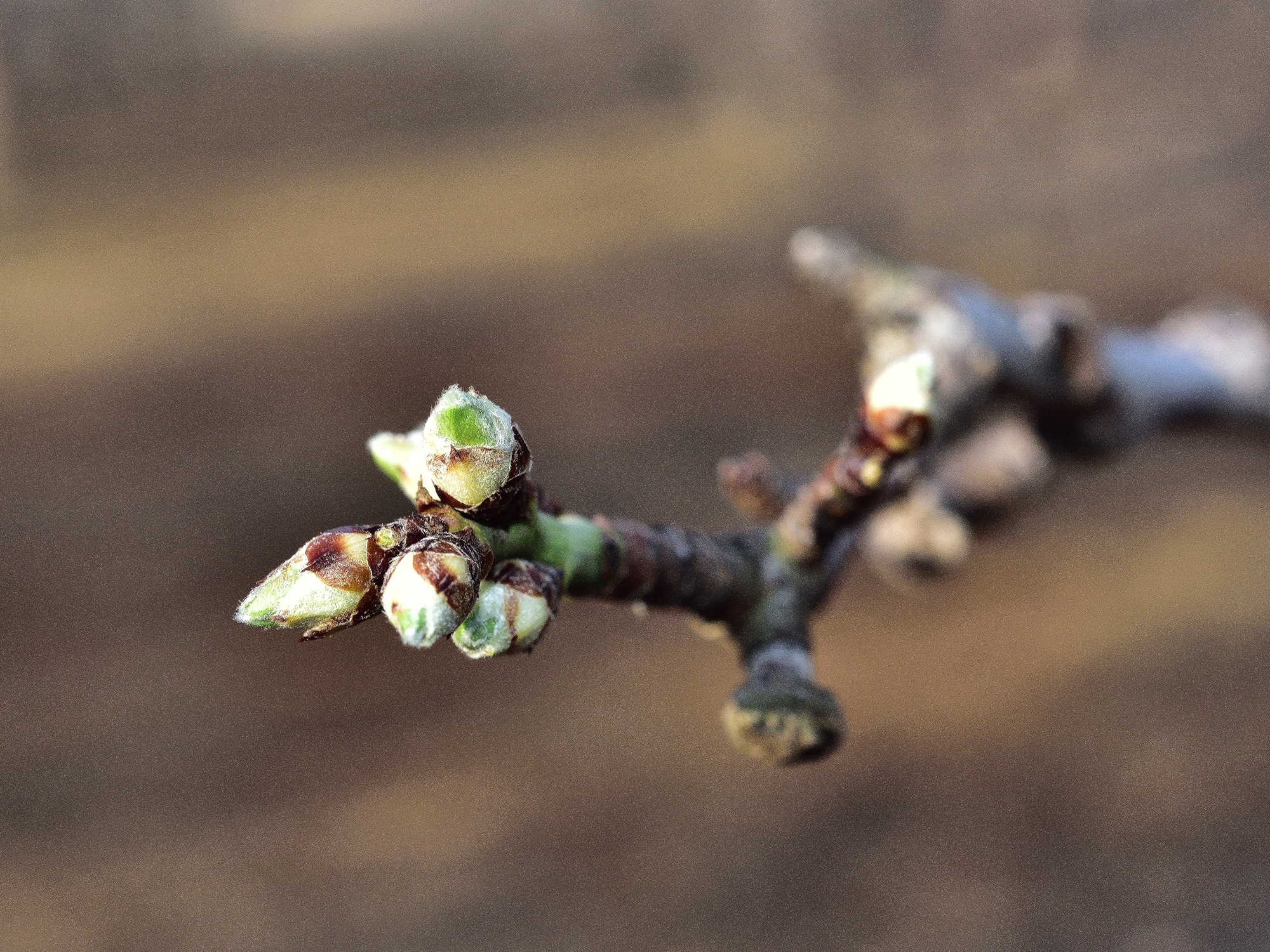 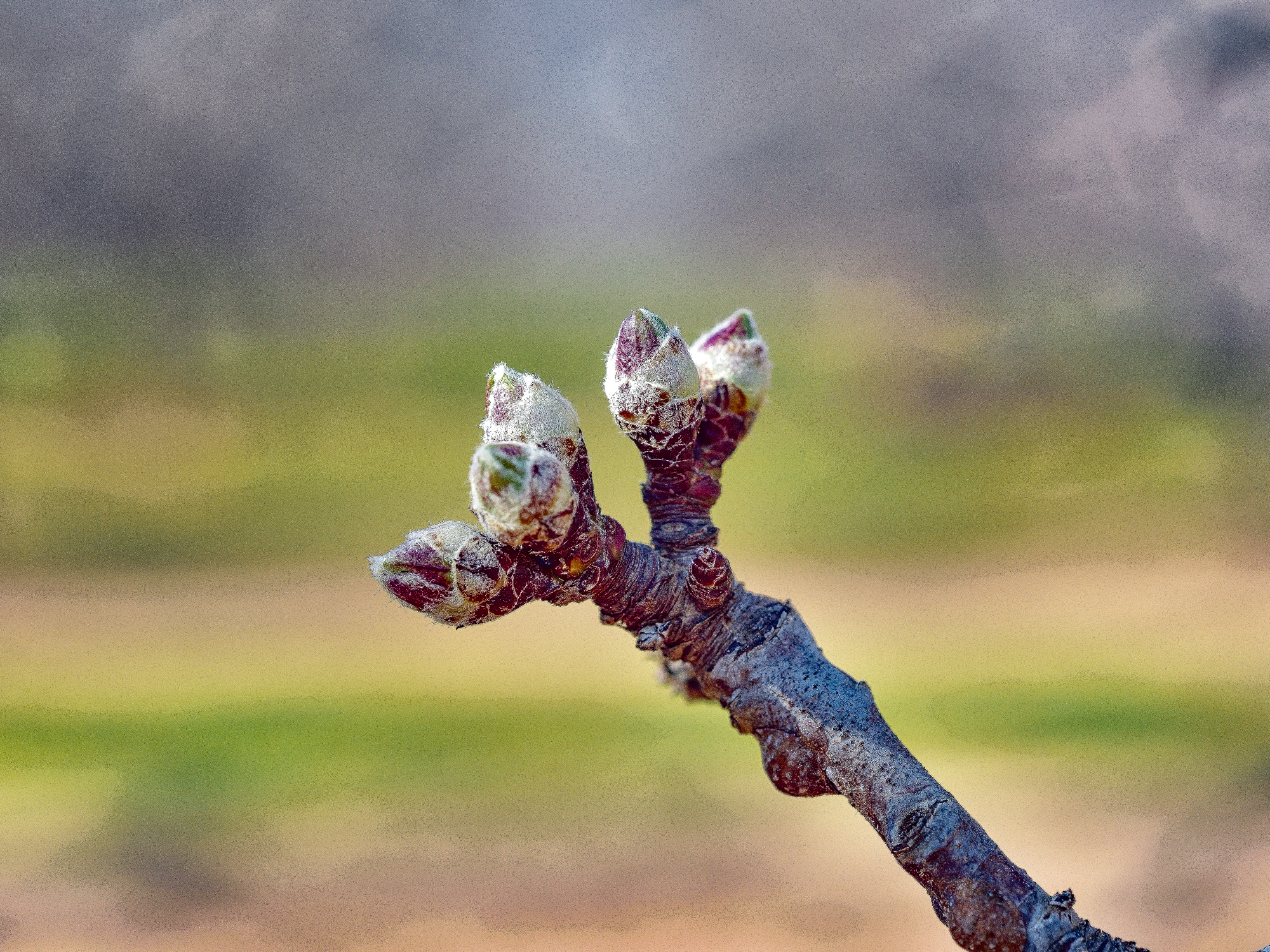 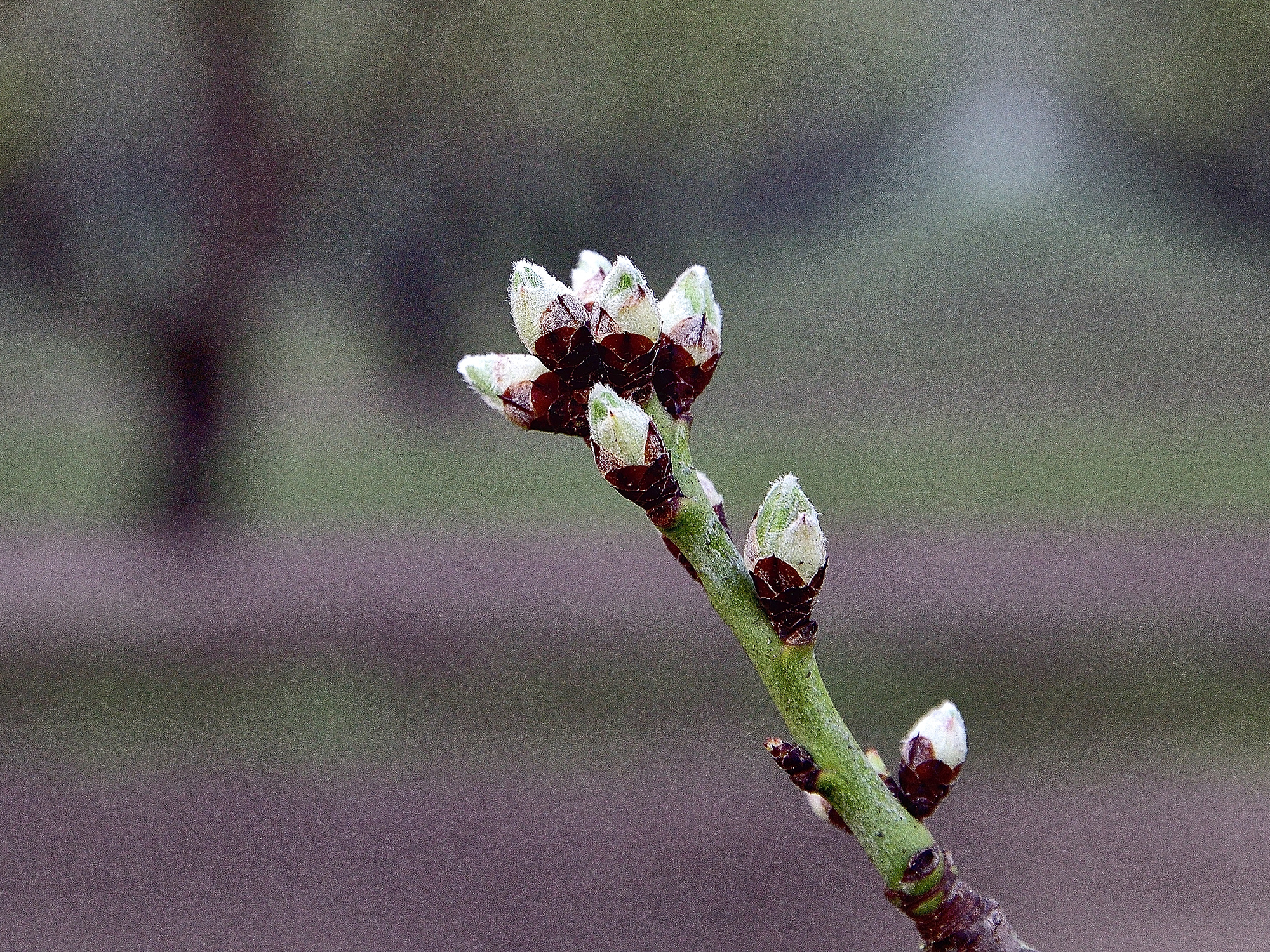 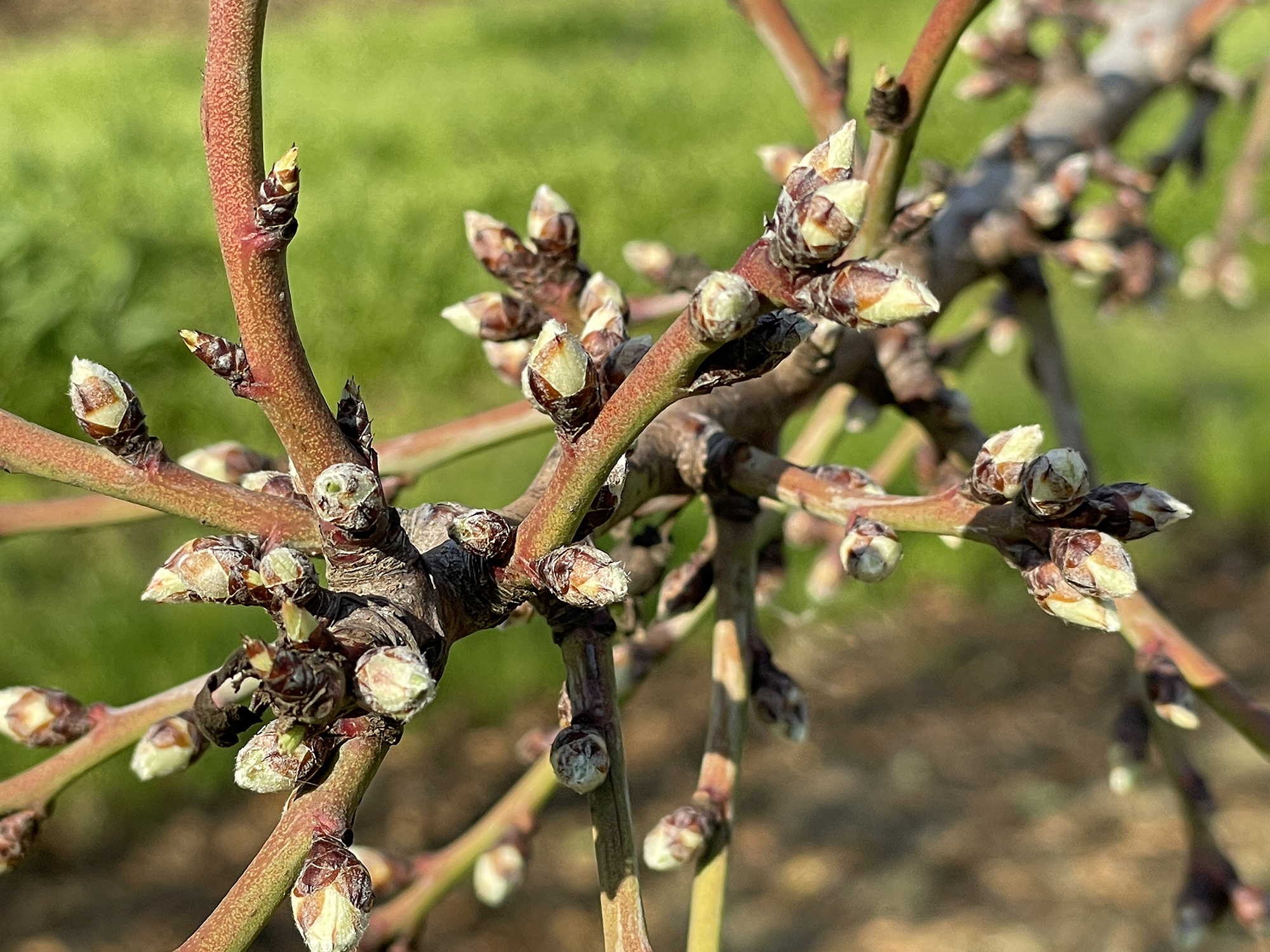 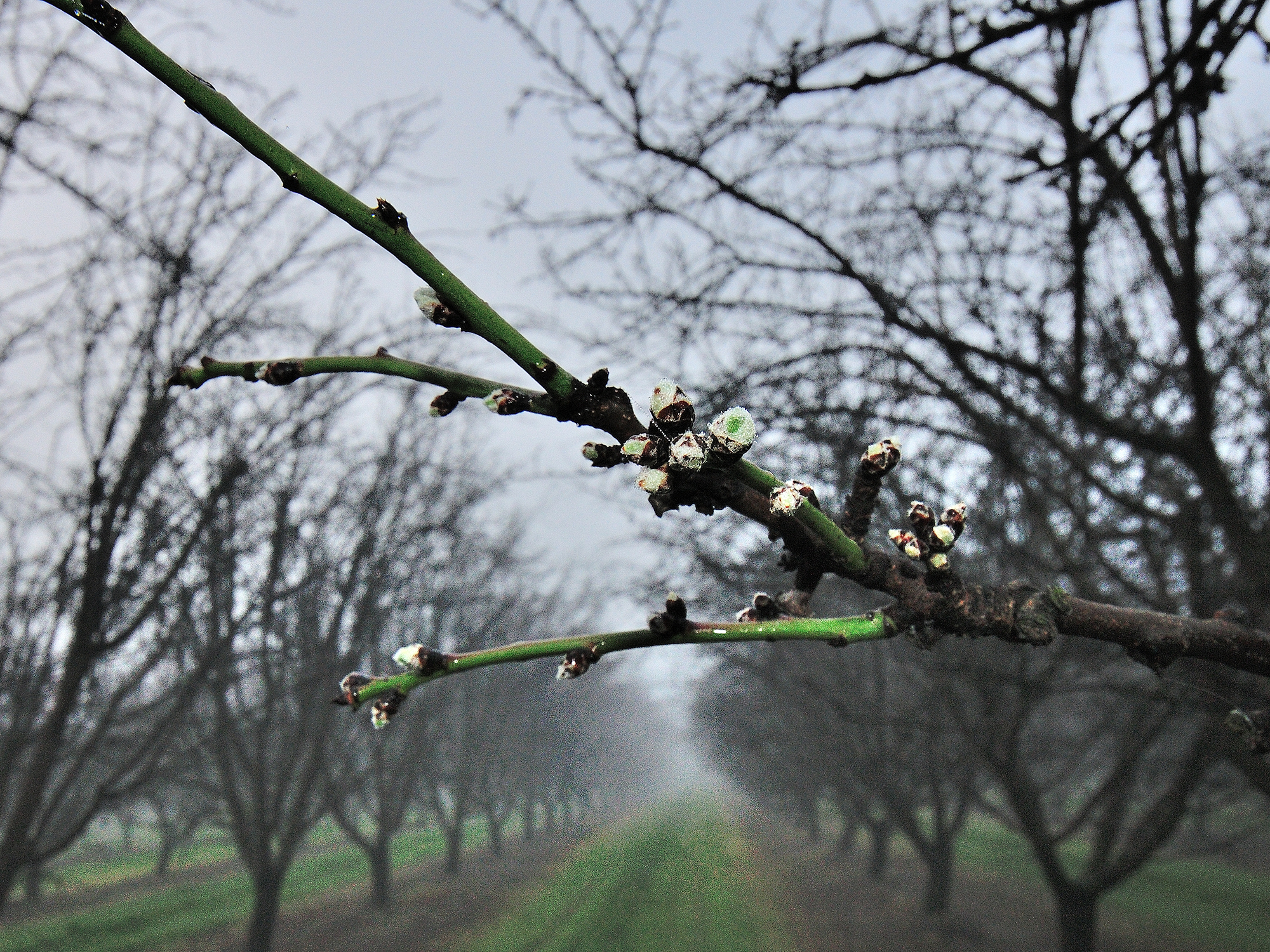 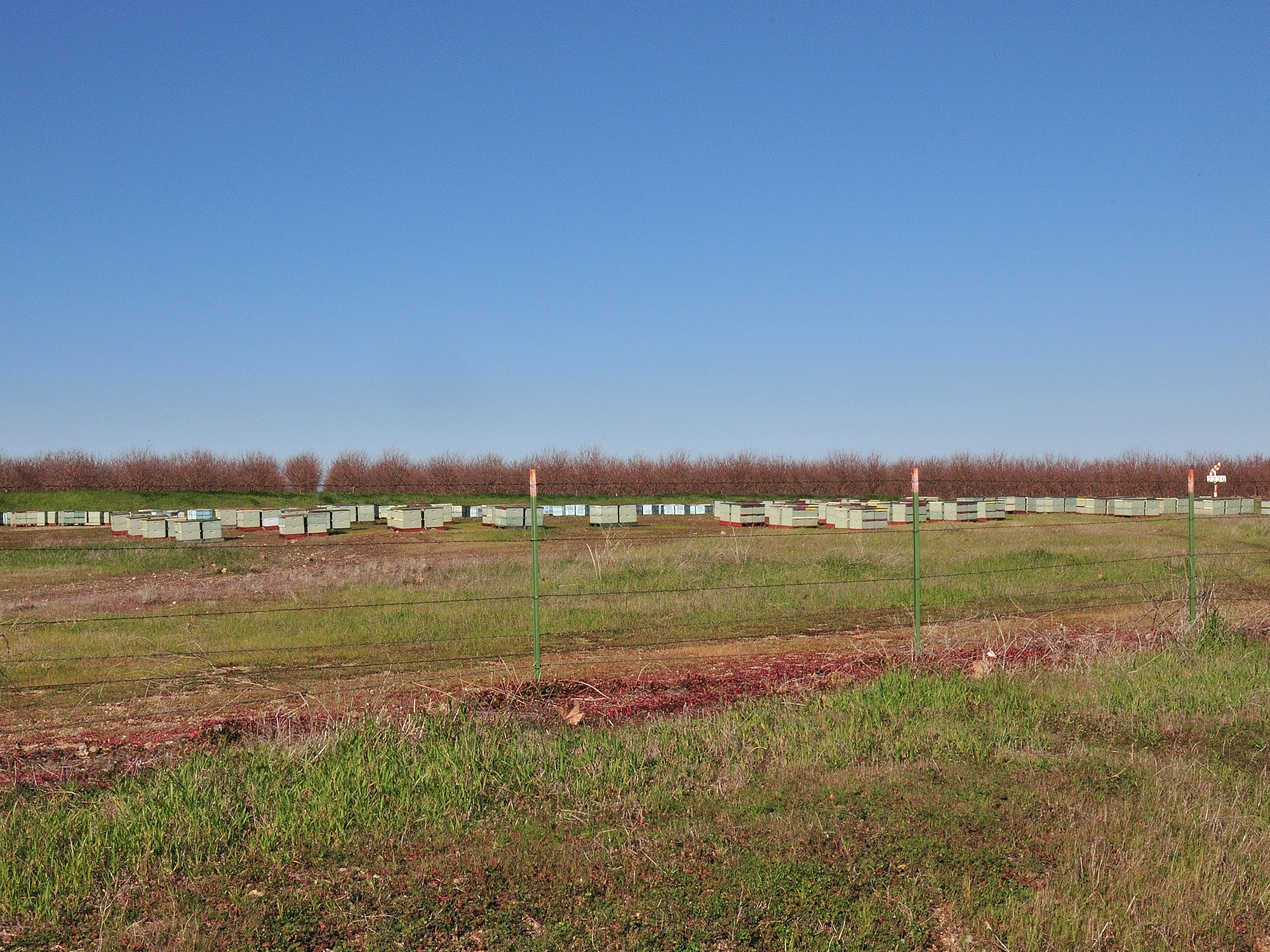 Bee Yard Prior to Moving into Colusa County Orchards