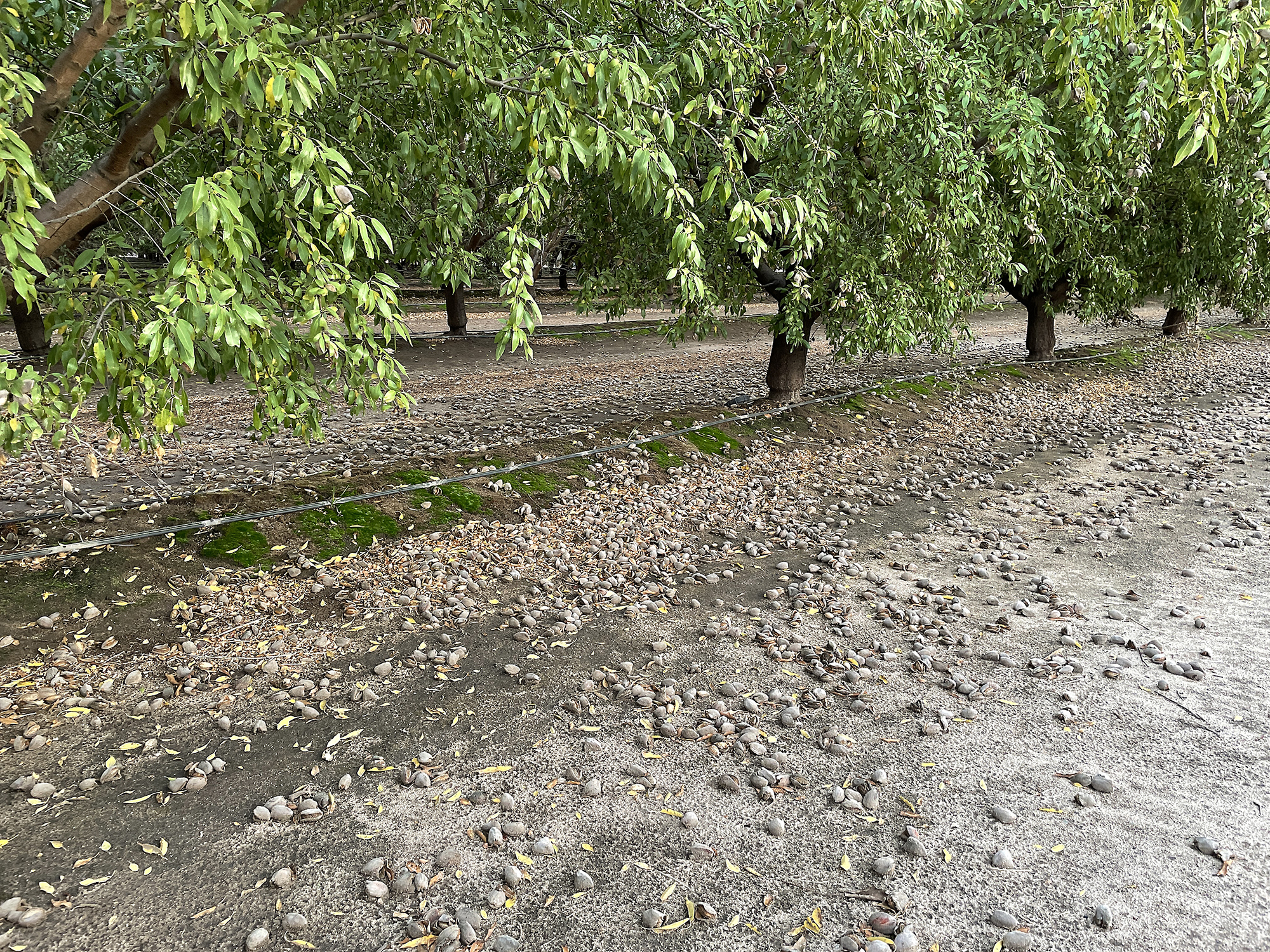 Wet Monterey after the Rain in San Joaquin County

Rainfall swept across the Central Valley during October as growers worked to wrap up the 2021 harvest. Daily maximum temperatures were reported in the low to mid 90’s in all growing areas at the start of the period. However, by October 10, temperatures entered a stepdown cooling pattern, dropping into the lower 60’s as a powerful weather system swept across the state. Morning low temperatures exhibited a bit more stability, ranging from the upper 40’s and lower 50’s to lower 60’s.

Brief rains swept across the state late in the week of October 10. Rainfall totals varied widely from this system, ranging from just settling the dust to as much as a ½ inch in isolated downpours. However, the first system merely served as the opening act for a much more powerful storm dubbed an “Atmospheric River” that delivered widespread heavy rain beginning on October 23 in the Sacramento Valley, continuing into October 25 in the southern San Joaquin Valley. Winds of 25 to 40 mph impacted all areas of the Central Valley, driving sheets of rain and blowing over trees in older plantings. Due to the river-like trajectory of the storm’s flow of moisture, greatest rainfall totals were reported in the Sacramento Valley where rain fell for a longer period of time. Four-to-six-inch accumulations were common, and the Oroville airport reported receiving nine inches on Sunday, the 24th. Rainfall totals were reported at more “moderate” levels in the San Joaquin Valley with 2.0 to 5.0 inches reported from San Joaquin through Merced counties and 0.5 to 2.5 inches reported from Madera through Kern counties. In both cases, the lower amounts were reported along the west side of the valley due to a “rain shadow” effect as the storm passed over the coastal mountain range.

Harvest operations in the Central Valley have been essentially completed. Crops in all but the last few orchards that were impacted by the heavy rain having been picked up and delivered to stockpile, or huller/shellers. Forecasters provided about a week’s advanced notice prior to the arrival of the storm and growers rushed to shake, sweep and pickup their late-maturing Monterey and Fritz plantings prior to the arrival of the rain. Winds that swept through the Central Valley on October 10th and 11th, reaching speeds approaching 30 mph, knocked much of the crop from the trees, making shaking somewhat of a formality in many plantings. While growers in the Sacramento Valley completed harvest operations prior to the rain, there are orchards scattered around the San Joaquin Valley with crop on the ground waiting to be picked up. Growers must allow time for the orchard floors to dry enough to facilitate sweeping prior sending pickup machines back into the orchards. Almond meats in excess of 7.0% moisture must be sent to driers prior to storage. Shorter days, high humidity and foggy mornings do not provide much opportunity for drying in the orchards. So, at this point, the harvest must be coordinated with the huller/sheller in order to schedule delivery to driers for safe storage after hulling and shelling. Huller/sheller operators have been working “green” high moisture product that growers rushed to pick up prior to the rain and have been diverting low moisture product that is safe to store to stockpiles. While the majority of huller/shellers have finished their work for the year, larger operations will continue to run into December.

Water deliveries from local irrigation districts ended during the month and growers worked to fill soil profiles prior to the end of deliveries. While the heavy rain helped to fill orchard root zones, it made no impact in the state’s drought. The warm nature of the storm system brought snow to only the highest elevations of the Sierra Nevada watershed, and much more is needed to ensure ample irrigation water for the coming year.

Growers have turned to post-harvest operations, held back by the wet soils in many orchards. Pruning and removal of older, low producing orchards has begun, along with the application of soil amendments such as gypsum, lime, or compost. In the coming weeks, growers will also begin applications to control weed growth within the tree row. However, some are reporting issues securing required materials due to the widely recognized supply chain issues that are also impacting agricultural suppliers. Growers will soon be sending shakers back into the orchards to remove nuts that failed to drop during the harvest in an effort to remove the prime over-wintering site for Navel Orange Worm. Orchard sanitation is the prime means of mitigating losses from this insect as growers prepare for the 2022 crop. 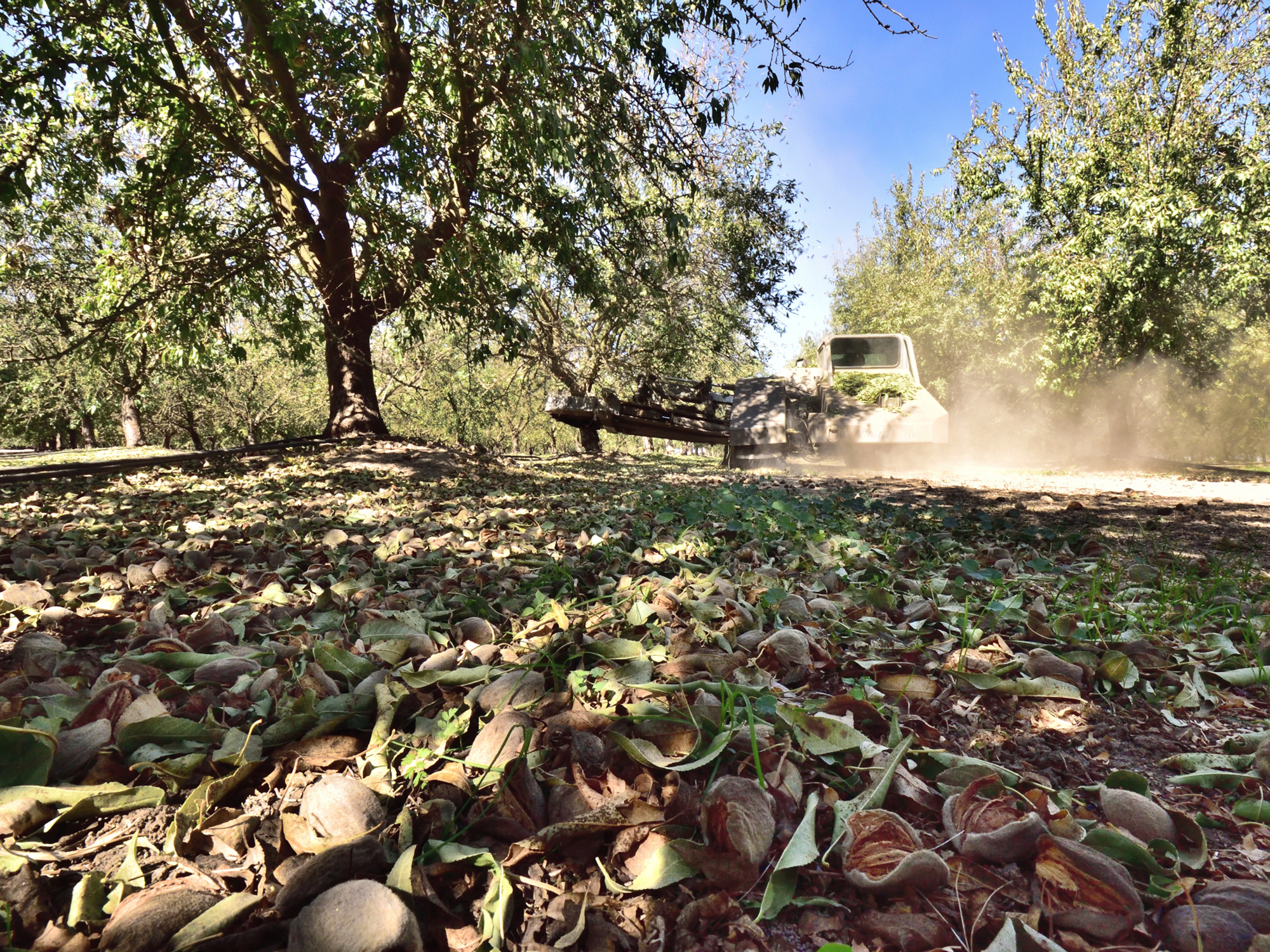 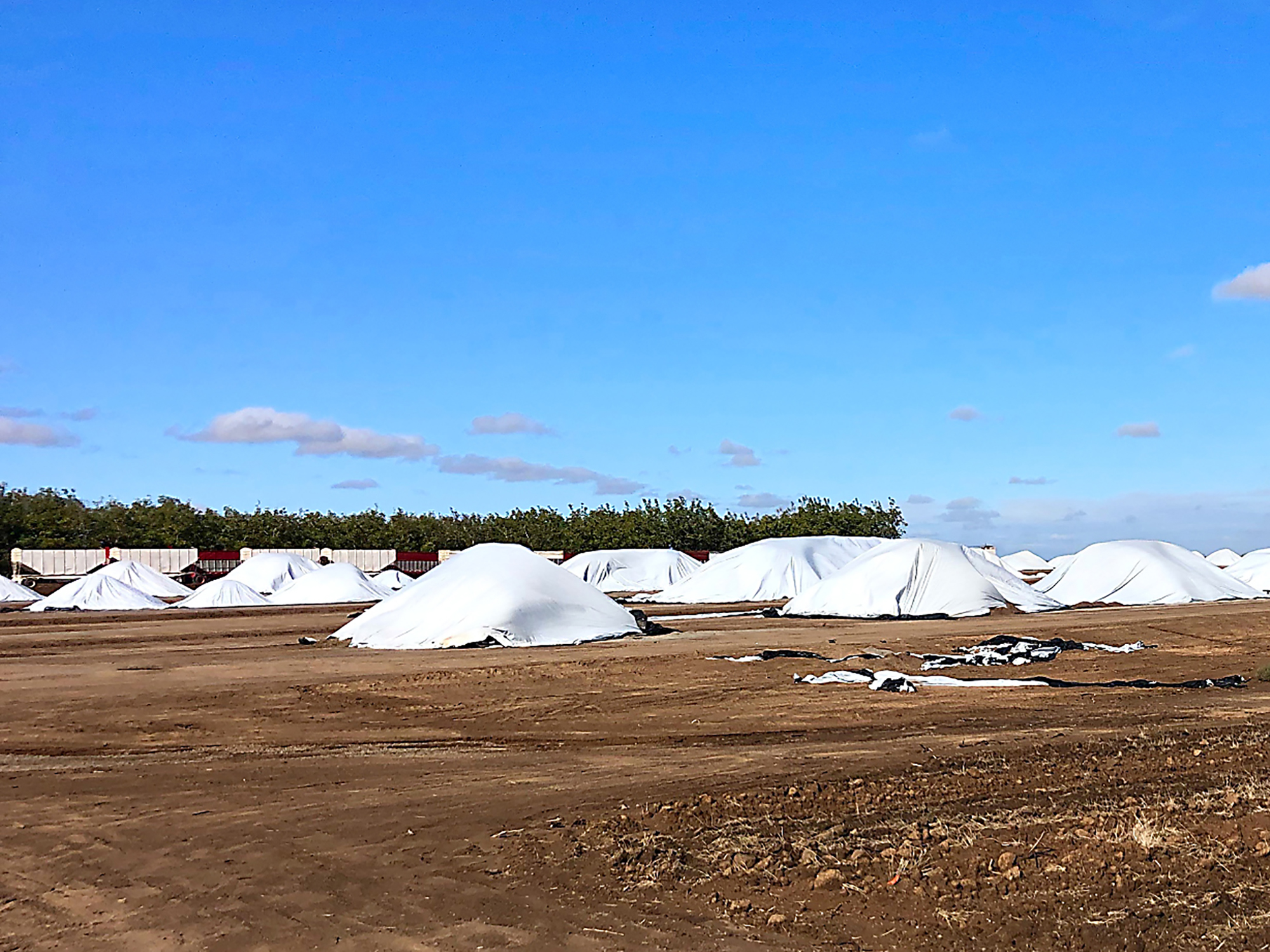 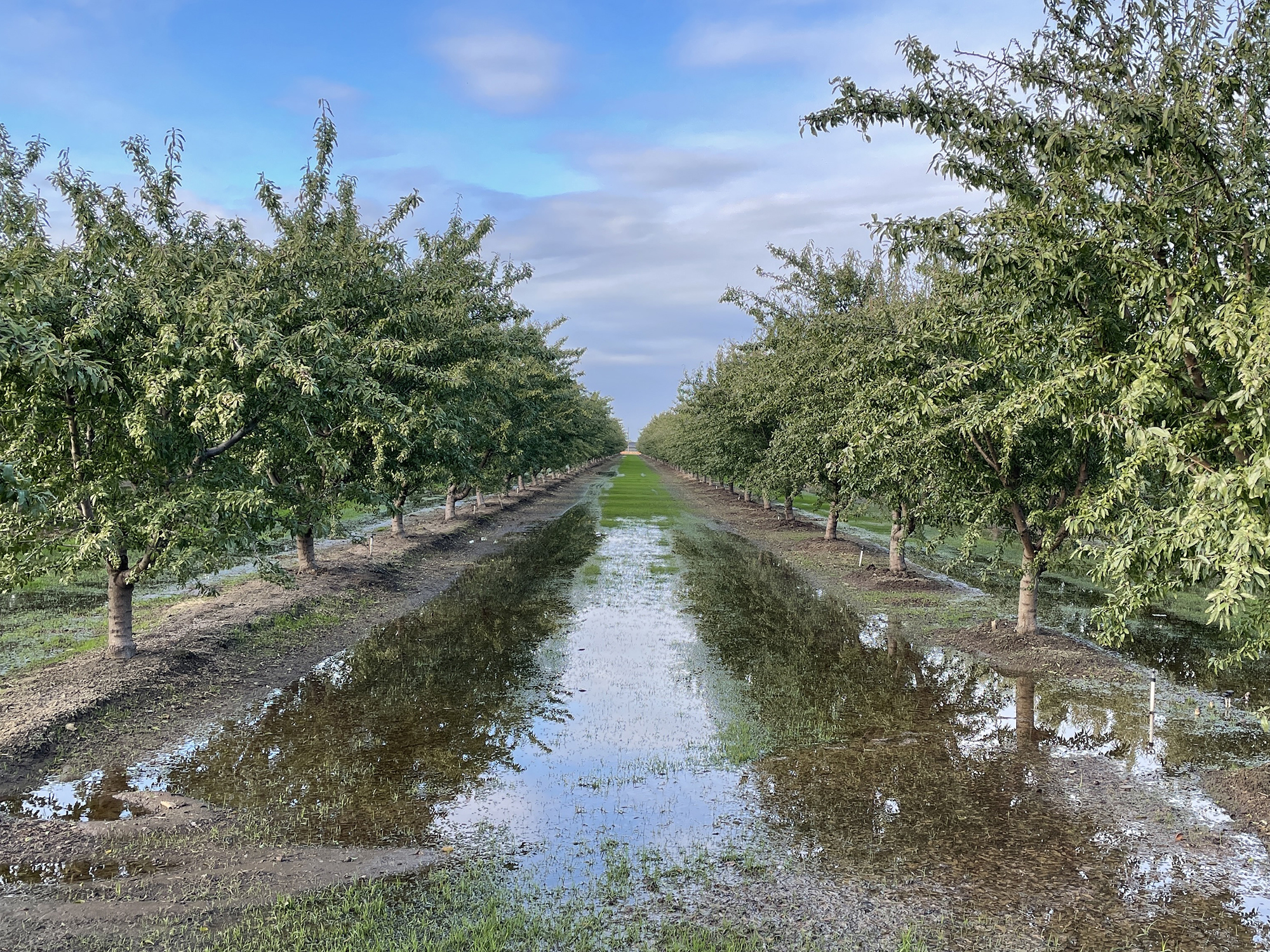 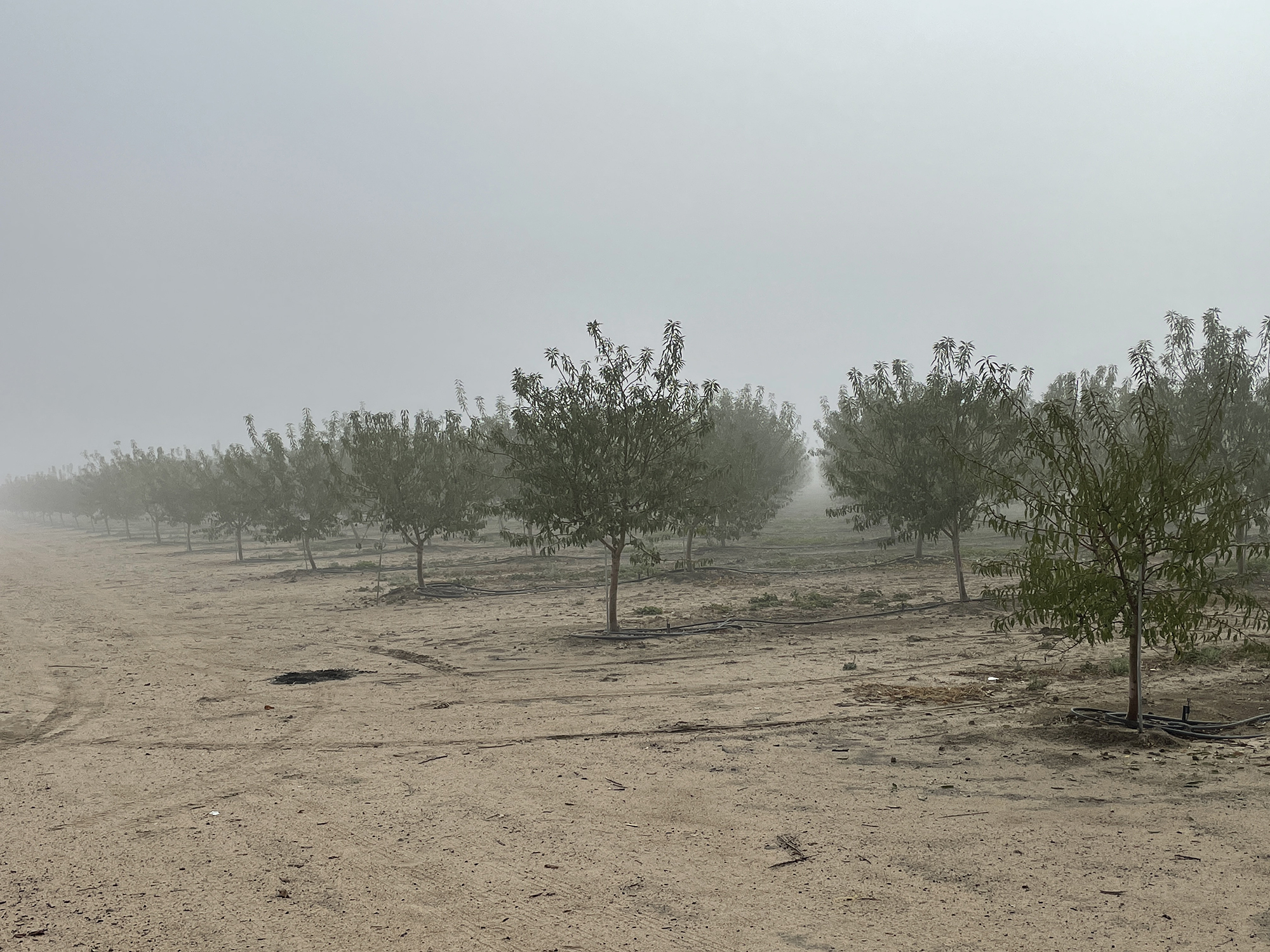 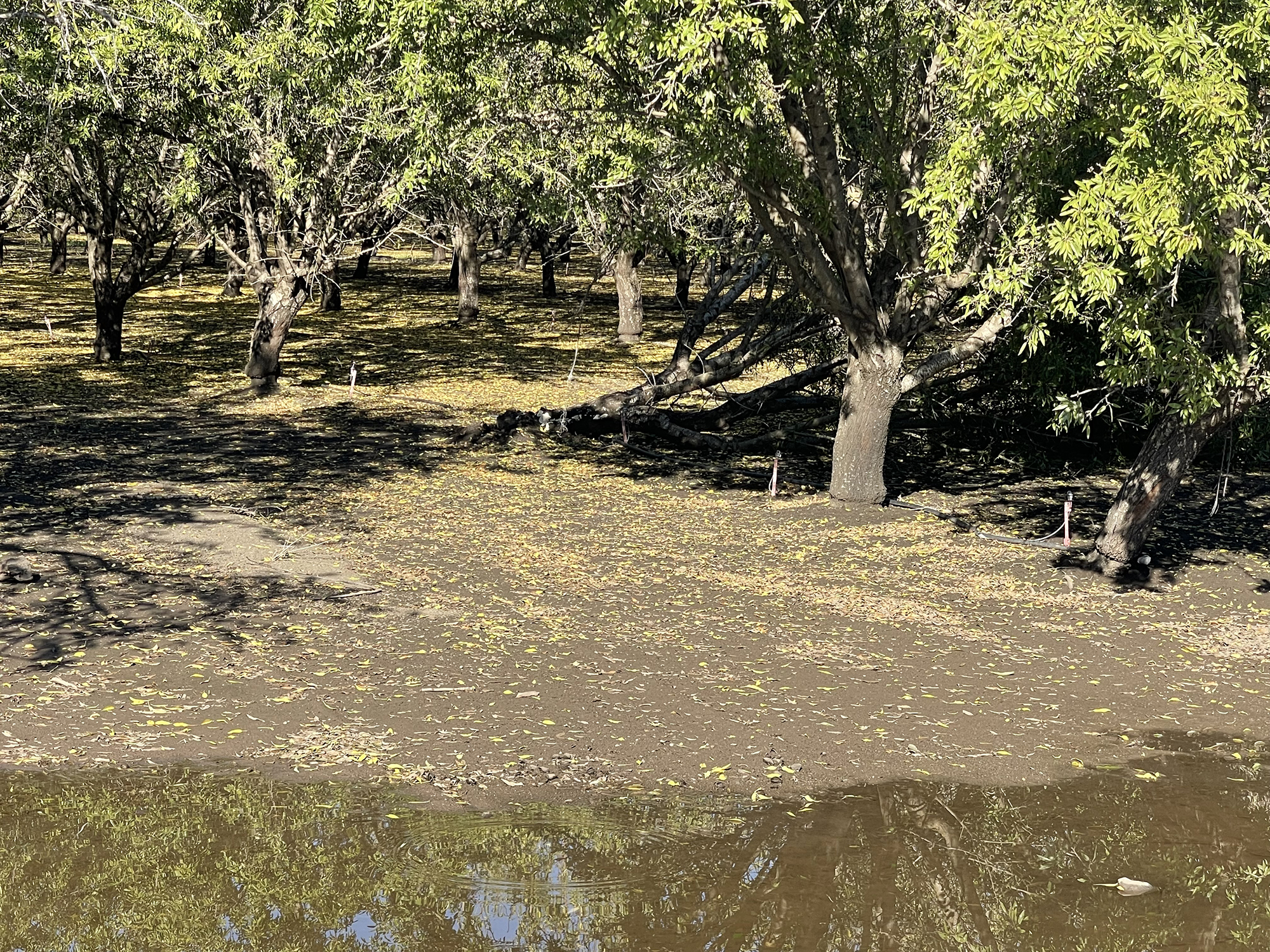 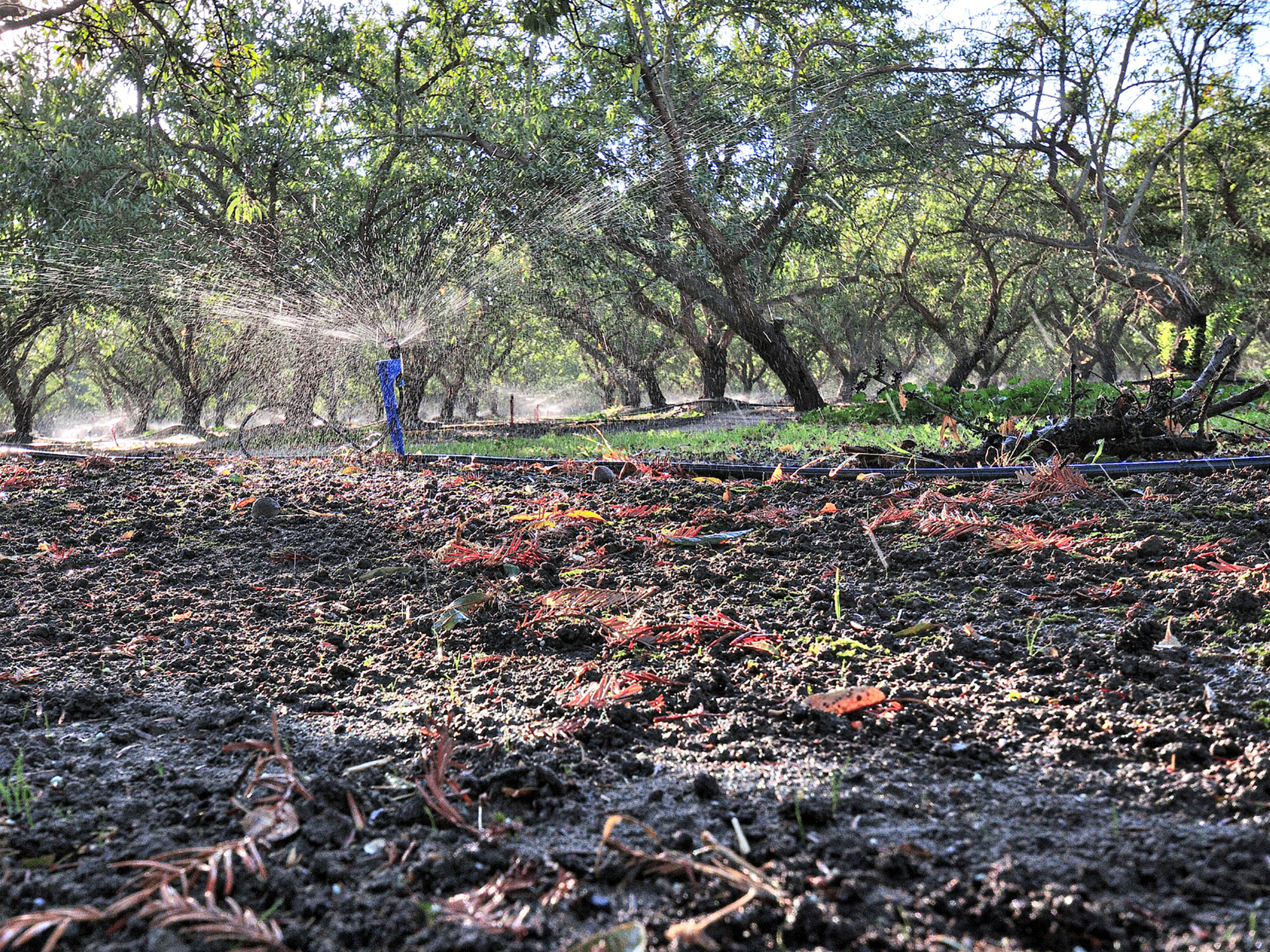 Post Harvest Micro Sprinkler Irrigation in Stanislaus Prior to the Storm 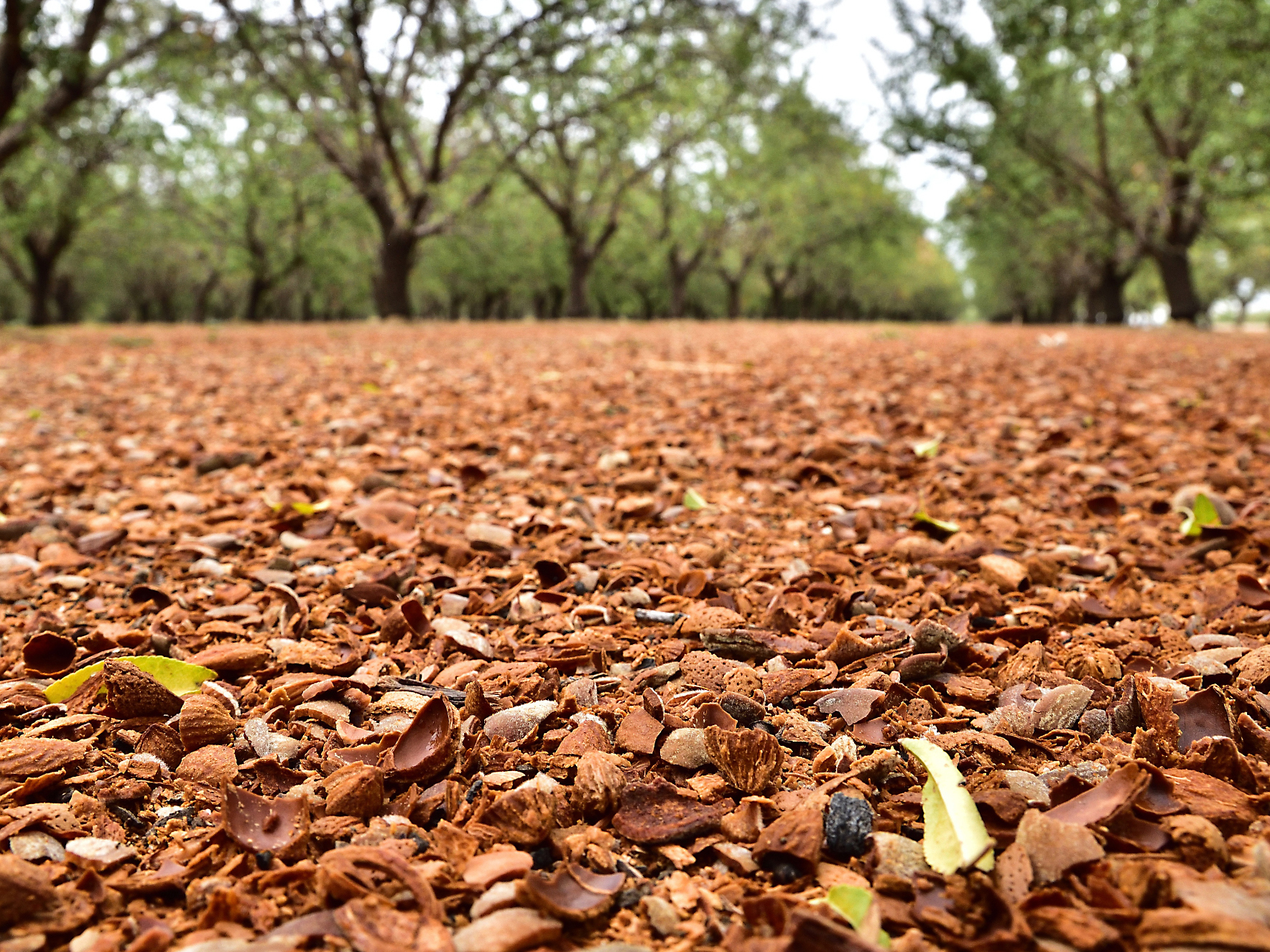 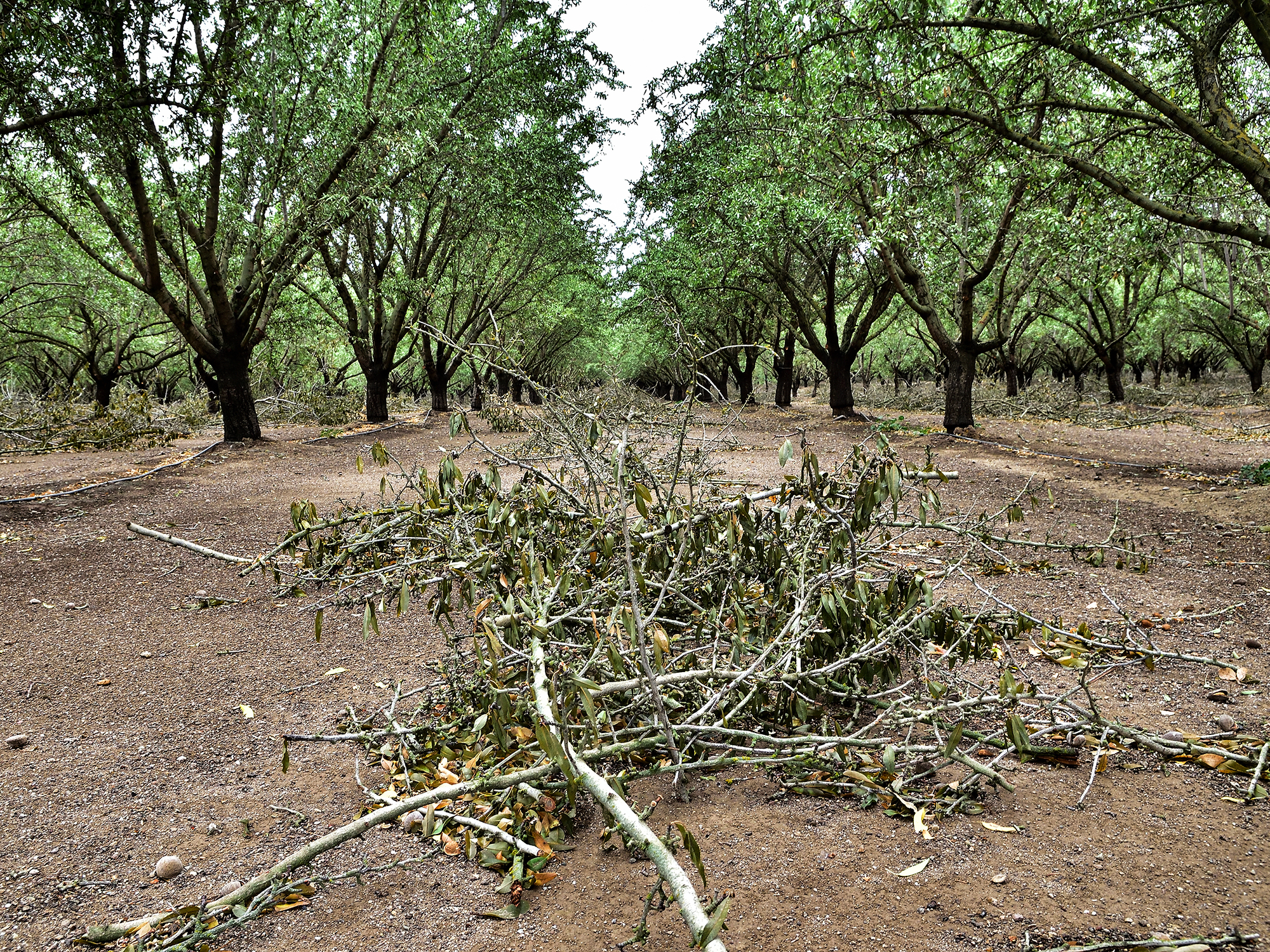 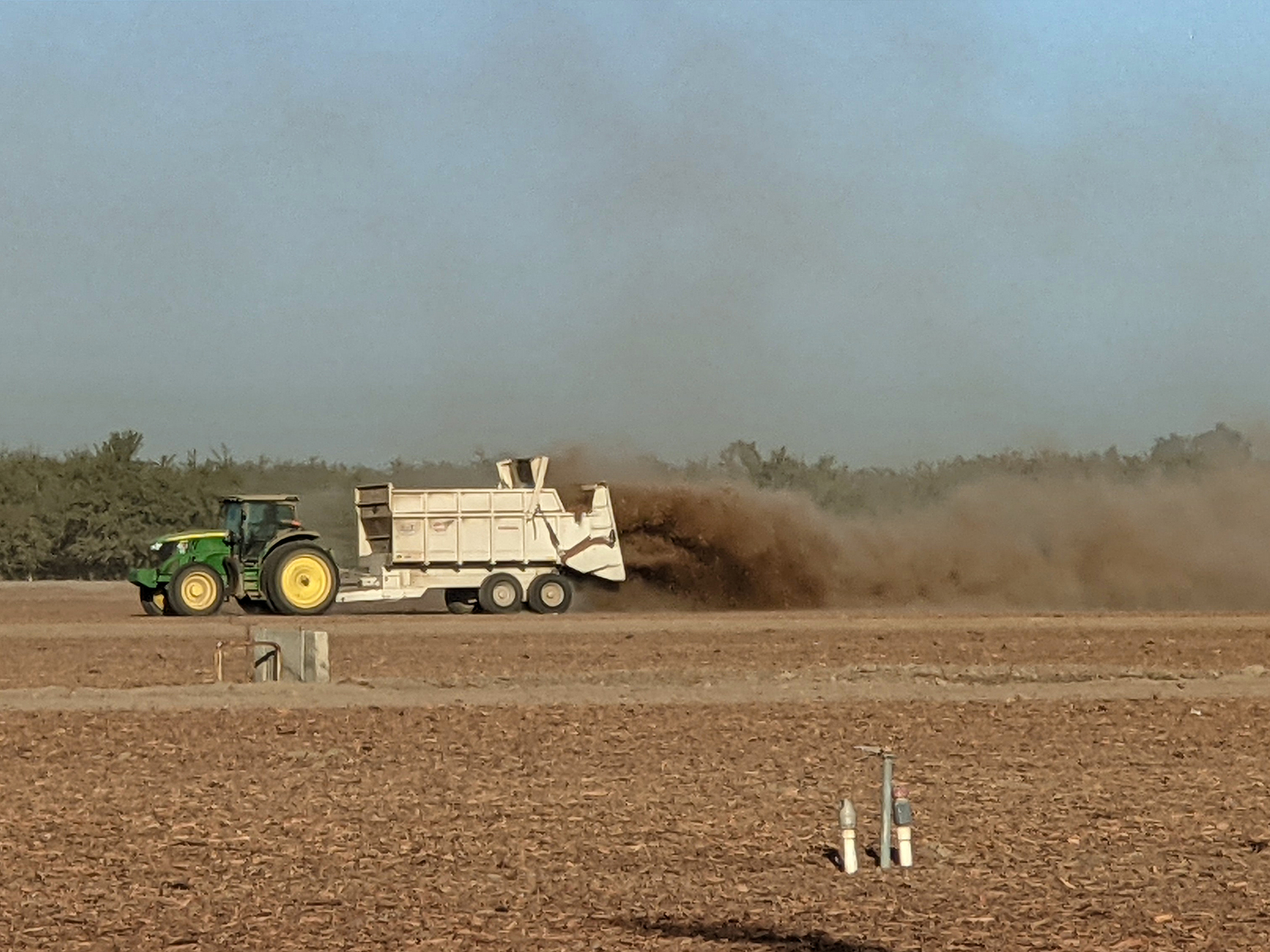