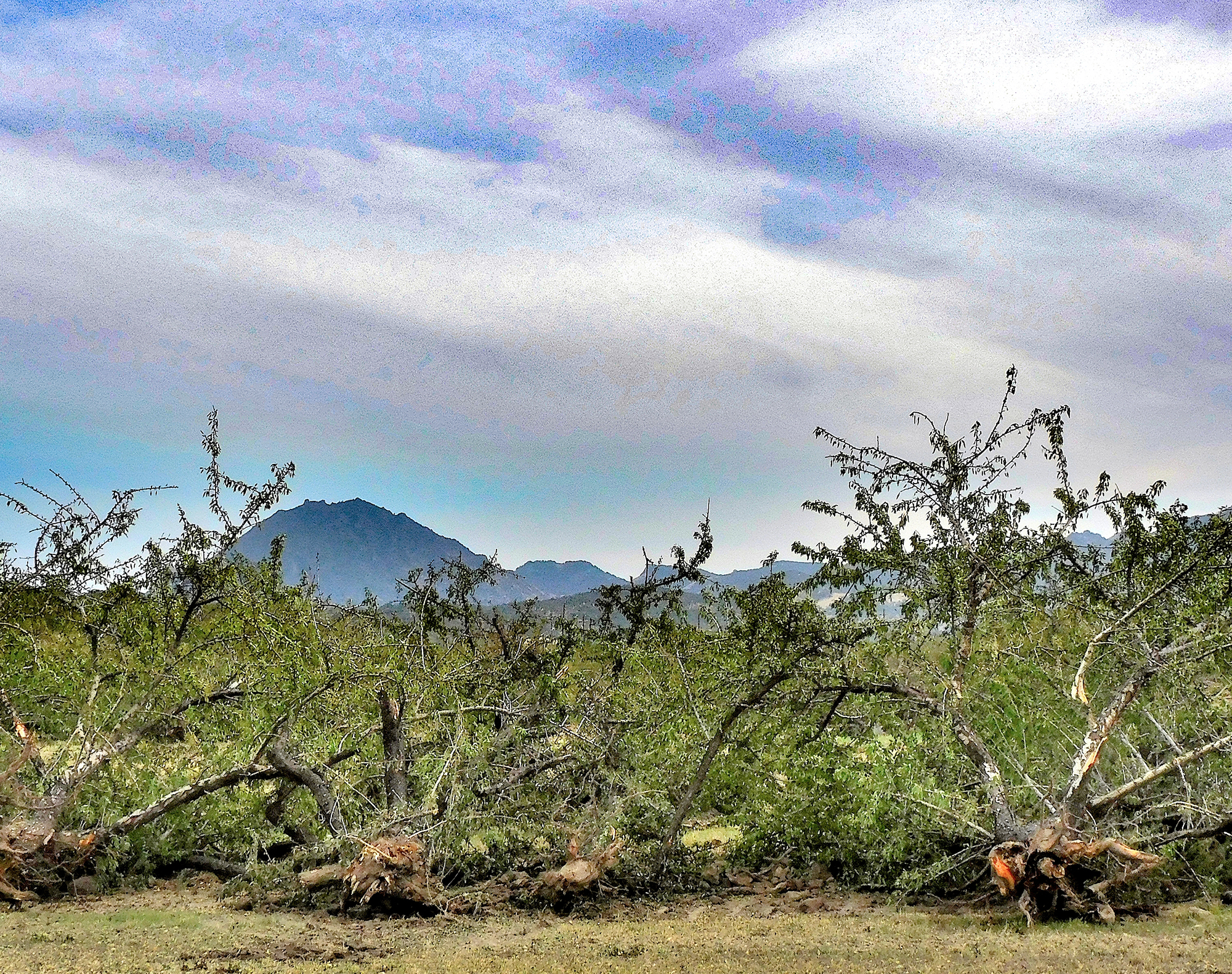 This is the final report of the 2022 crop year, covering the conditions and observations made between Monday, October 3, and Sunday, October 30, 2022. The next report will be posted on or around, Monday, January 30, 2022, prior to the start of the 2023 bloom.

Clear, dry skies reigned over California’s Central Valley during October, providing ample opportunities for the completion of the 2022 harvest. Daily maximum temperatures reached their highest levels early in the  period, rising into the mid and upper 90’s on the warmest days. Temperatures moderated during the month’s final week as a weakening weather system brushed past the state drawing cooler air across the Valley, dropping temperatures into the mid 70’s. Morning lows followed a similar trend, dropping from the mid and upper 50’s reported early in the period, to the upper 40’s during the final week of the month.

Observers are reporting that with the exception of the last few orchards with late-harvesting Monterey and Fritz plantings, harvest operations of the 2022 crop have been completed. Following the rain experienced in September, growers worked diligently to complete the harvest as quickly as conditions allowed, while also avoiding picking up product with excess kernel or hull moisture. Growers have noted that that while weather during the period was generally supportive, heavy morning dew in many areas delayed the start of sweeping and pick-up operations each day as growers worked to avoid product with excess moisture. Huller/sheller operations are particularly interested in assuring proper moisture levels on harvested material so to properly hull and shell the crop without damage and to prevent spontaneous combustion of hulls stored at their facilities.

With the completion of the harvest, growers have switched fully into a post-harvest mode. “Floating” or scraping the orchard middles is one of the first tasks for most growers, leveling out the hump that may have been created by sweepers during the harvest, preparing the floor for the next harvest. Local irrigation districts with water still available completed their delivery season during the month inspiring growers to wrap up field operations as soon as possible in order to complete critical post-harvest irrigations.

Observers have noted that some growers have begun applications of soil amendments such as gypsum, lime, or compost. However, growers are mindful of rising costs and are watching their bottom line closely while also providing necessary resources. Applications of potassium fertilizers have received particular attention this year. Potassium materials are typically applied post-harvest as banded applications of granulated material down the tree row. However, the cost of potassium materials has risen dramatically over the past year, inspiring many to delete these applications from the normal list of post-harvest tasks, or seek more economical alternatives.

Pruning crews are being sent into orchards to train younger plantings and clear problematic growth in others. University research has demonstrated almonds need much less pruning than previously thought. As a result, growers have reduced pruning to basic structural training in younger plantings and therapeutic pruning in established orchards, focusing on removing broken, diseased, or dying branches. Where pruning is being done, crews will deposit the resulting brush in the “middles,” the area between the tree rows so that brush shredders may be sent into the orchard to grind the brush into small toothpick-like pieces for more rapid breakdown, adding organic matter to the soil.

Several orchard tasks should be completed sequentially, in a particular order for the most efficiency, depending on conditions within each orchard. Planting of cover crops has been increasing as a normal practice. Growers have the choice of several seed mixes or blends depending on the conditions within each orchard. However, each blend is designed to enhance the amount of forage available for honeybees and other pollinators prior to the start of the subsequent bloom. Optimal timing for cover crop planting is in October in order to ensure that the crop will be blooming prior to the start of the almond bloom. As moisture is required to germinate the seeds, growers with the ability to cover the entire or at least the majority of the orchard floor during irrigation have already begun planting. Others are planting in the hope that rain will soon come and initiate growth of the cover crop in time to ensure adequate growth.

With the completion of harvest operations within the orchards, work at huller/sheller operations continues. While a number of the smaller hullers and huller/shellers have already complete their work for the year, larger operations are expecting to continue running stockpiled product well into November or December.

As has been noted in previous reports, growers have begun removing older, low producing orchards. With the completion of the harvest, the pace of removals has picked up noticeably. Observers are reporting a significant number of orchards are being removed as growers run the calculations of water availability, declining production, rising costs and low pricing potential for the near future.

Over the coming winter months, growers will be managing weed growth within the orchard’s strips, the area down the tree row and sanitizing their orchards. Sanitizing involves shaking mummy nuts, those that failed to drop from the trees during the harvest, then sweeping and destroying  the mummies using flail mowers. This is a foundational practice designed to reduce the number of Navel Orange Worm larvae over-wintering within the orchards, helping to reduce reject levels in the next crop. 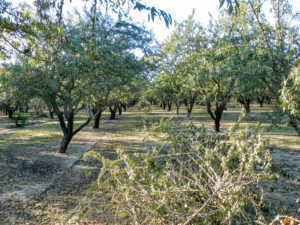 Prunings Waiting for the Shredder in Merced County 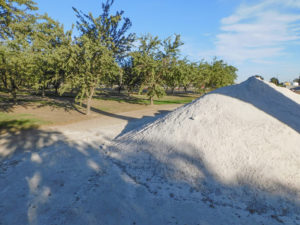 Gypsum Waiting to be Spread in Merced County 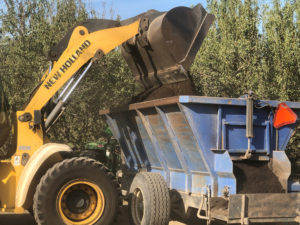 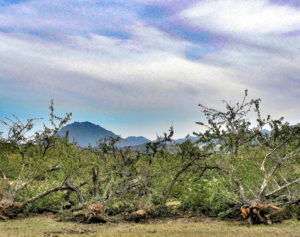 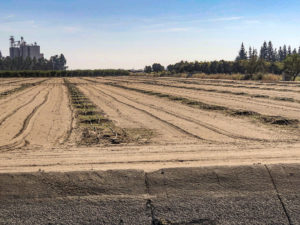 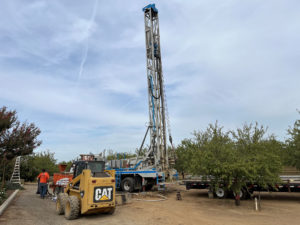 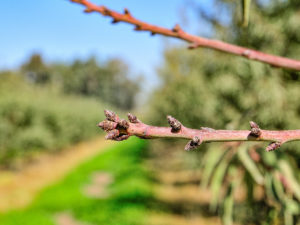 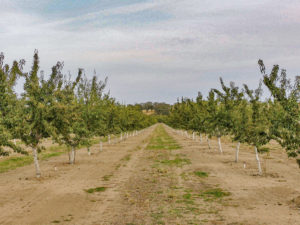 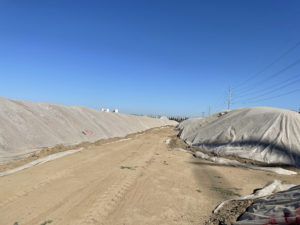 Stockpiles Waiting to be Shelled in Stanislaus County