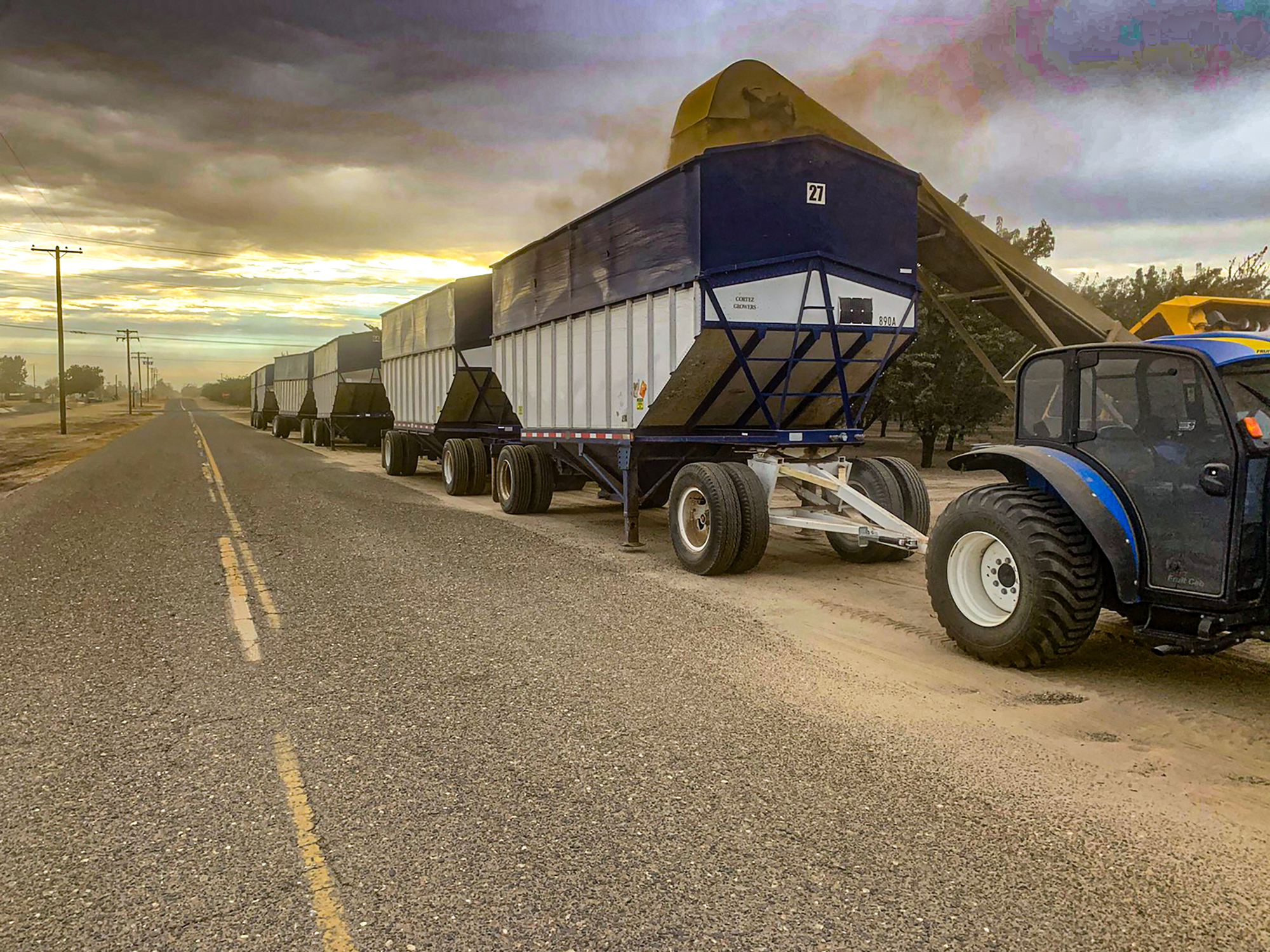 This report covers conditions and observations made between Monday, August 29 and Sunday, October 2, 2022. The next scheduled report will be posted on Monday, October 31, 2022. In the event of any significant occurrences prior to that date, this site will be updated as soon as possible

The final weeks of summer brought widely varying weather to the Central Valley, with new record values for maximum temperatures and rainfall both being set in just a matter of days. Daily maximum temperatures were widely reported in the mid to upper 90’s in the opening days of the period. Temperatures then rose rapidly to their maximum values for the period, ranging from 110 to as high as 115 degrees between September 2nd and 9th. Following a brief period of more tolerable temperatures, conditions took a dramatic turn with the arrival of a cut-off low pressure system traveling down the California coast, delivering rare September rain to the valley. Official precipitation totals for the storm, which accumulated over nearly three days varied widely, ranging from trace amounts to as much as 3.0 inches. Unofficial reports from growers in the northern San Joaquin and southern Sacramento Valleys reached as high as 4.0 inches from a single particularly strong cell. After several days of unsettled conditions, skies cleared, and temperatures returned to more normal values for the last two weeks of the month.

Harvest operations continued at a feverish pace during September as growers worked to bring their crops in from the orchards. The unusually hot temperatures increased stress levels on orchards throughout the central valley, inspiring growers to get the crop out of the orchard as soon as possible to provide a stress relieving irrigation. Observers are reporting that the harvest of the Nonpareil, Price, Sonora, and Independence was largely completed prior to the arrival of the storm and growers had begun shaking the balance of the associated pollinizers. By the end of the period, growers were well into the harvest of their Butte and Padre plantings and had begun to shake advanced plantings of the Monterey and Fritz. Fortunately, weather forecasters had predicted the storm’s passage well in advance of its arrival, giving growers and custom harvest operators ample time to prepare. Those with crop in the trees stopped shaking in the days prior to the storm’s arrival and those with crop on the ground worked to minimize the amount left in the orchards when the rain began. While some growers were caught with crop on the ground as the rain swept across the valley, summer-like conditions returned to the valley after the storm’s passage providing excellent opportunities for the crop to dry in the orchards and very few difficulties have been encountered due to the rain. With the good conditions for drying, huller/sheller operations closed their doors to product from the orchards and reverted to running stockpiled material until harvest operations resumed.

As has been reported throughout this year, yields in the Sacramento Valley have been quite disappointing as a result of the bloom-time freeze. Most Sacramento Valley huller/sheller operations have been processing crop upon arrival rather than diverting to stockpiles and are anticipating completing their work for the season by mid-October, months ahead of the normal timing. Growers in the San Joaquin Valley are reporting yields below last year’s level, which had been expected. Huller/shellers are reporting that turnout percentages, the percentage of the total meat weight compared to the in-hull weight delivered from the orchards are also running below last year’s levels. This is attributable to the number of blank kernels and particularly low kernel moisture levels.

Growers and observers in the San Joaquin Valley are reporting that reject levels of the Nonpareil have been running at comparatively low levels, similar to the 2021 crop. Some believe that conditions during the growing season were such that the flight of NOW females and resulting egg laying generally “missed” the hull split timing, resulting in a lower level of damage attributable to NOW. While the Nonpareil has been relatively “clean,” damage levels have been increasing as growers move into their pollinizers, the result of the final NOW flight prior to harvest and a more diverse hull split across varieties. Brown Spot, produced by various Plant Bug species has been a problem for some growers and remains a significant issue. Unfortunately for those in the Sacramento Valley, the dramatically lower production translates into correspondingly higher reject levels with many growers enduring elevated levels of damage.

As each grower completes their harvest, the natural progression into post-harvest activities begins. Post-harvest irrigation is generally the highest priority, followed by final applications of nitrogen, potassium, and any soil amendments that may be required. The summer to fall transition also brings the end of water availability from local irrigation districts and growers are working to get the last irrigation completed prior to the cut-off of deliveries.

As seen in the accompanying photos, growers have already begun removing older, low producing orchards and preparing land for replanting. Orchards being removed are pulled, then ground or shred, with the resulting material spread onto the land to be worked into the soil, thus sequestering the carbon from the wood into the soil. Planting using potted trees is now a continual operation, running twelve months a year and growers have also been caring for their younger plantings, whether new or replacements of previously removed orchards. 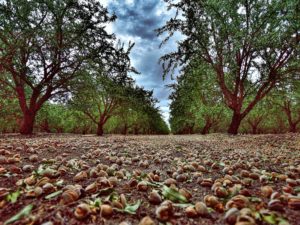 Butte and Padre on the Ground During the September Storm 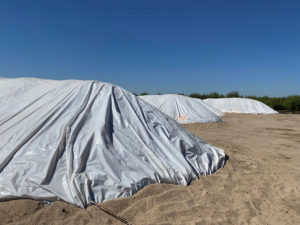 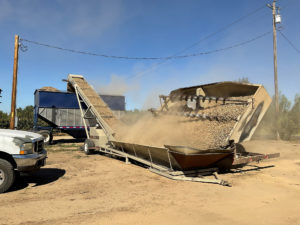 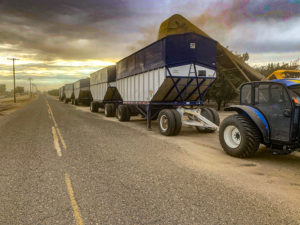 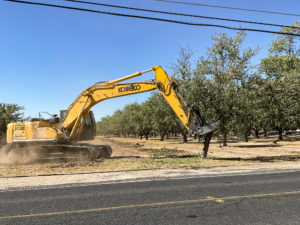 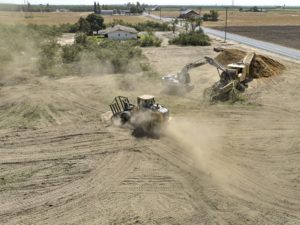 Shredding the Trees in an Old Orchard in Stanislaus County 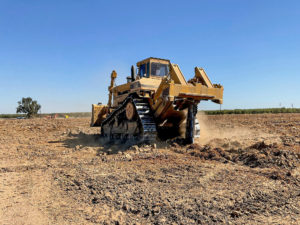 Land Preparation for a New Orchard in San Joaquin County 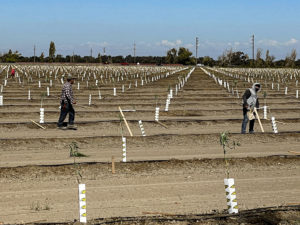 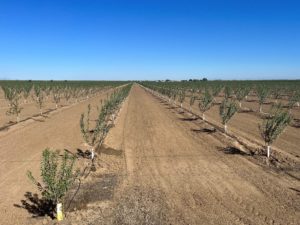