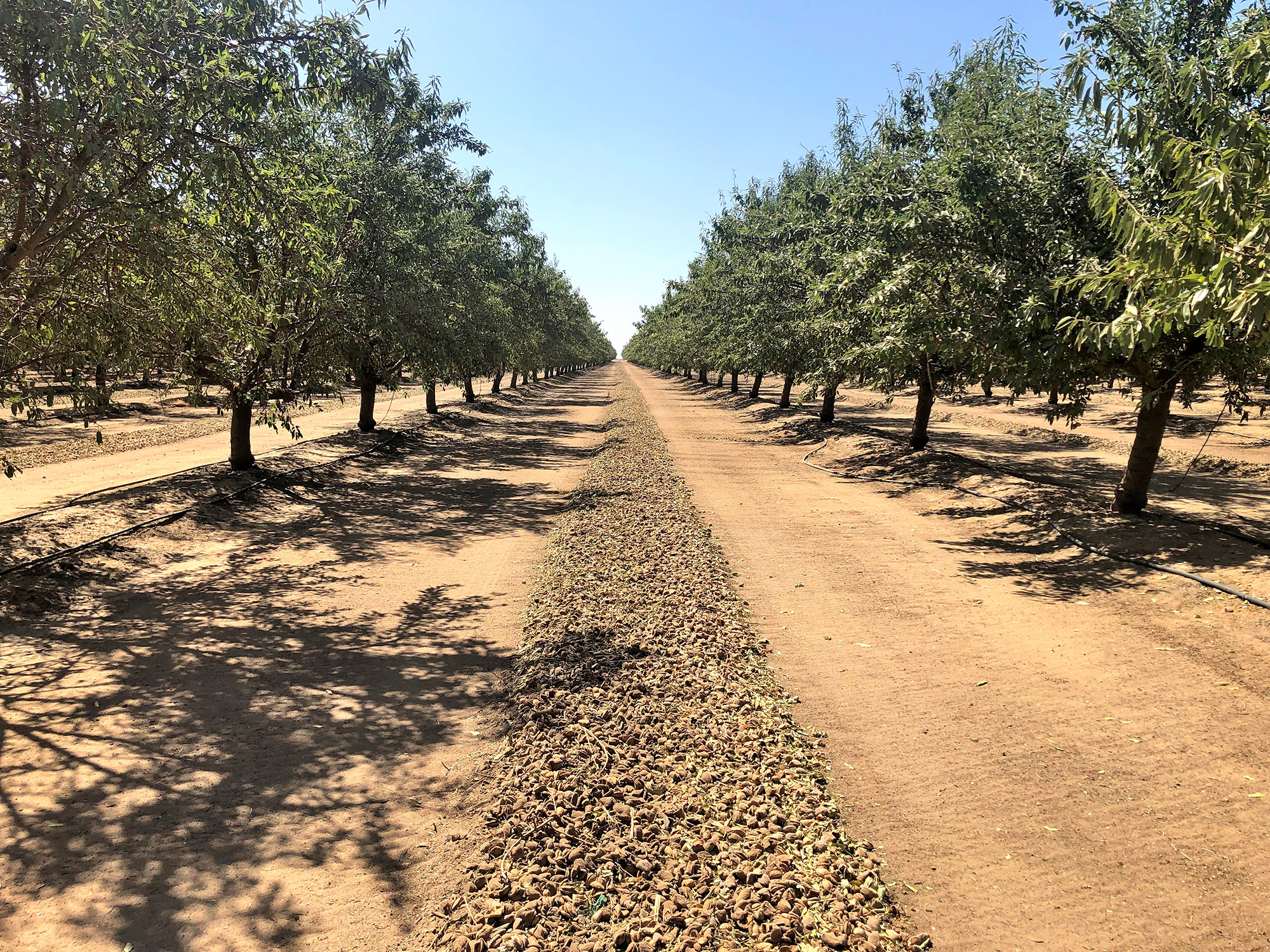 This report covers conditions and observations made between Monday, August 5, and Sunday, September 1, 2018 . The next scheduled report will be posted on Monday, September 30, 2018. In the event of any significant occurrences prior to that date, this site will be updated as soon as possible.

Summer-time conditions dominated the Central Valley’s weather during August, helping to drive the 2019 crop into harvest. Daily maximum temperatures on the period’s “coolest” days ranged from the upper 80’s and lower to 90’s and peaked as high as 106 degrees during a string of particularly “warm” days at mid-month. Meanwhile, morning lows varied between the upper 50’s and upper 60’s, helping to push crop development ahead.

The 2019 harvest has begun in all areas of the Central Valley. As noted in our previous report, shakers were first sent into orchards in the southern San Joaquin Valley during the third week of July. Shaking operations have spread over the remaining growing areas over the past weeks and by the final week of the period, harvest operations were observed in all areas of the valley.

Shakers have been racing from orchard to orchard working to keep up with the demand for shaking services. Growers are wanting their Nonpareil variety shaken as rapidly as possible in order to minimalize potential damage from Navel Orange Worm, NOW. However, the rapidly expanding acreage of the Independence variety, which harvests at the same time as Nonpareil has significantly increased demand for services from custom operators by growers who depend on others for harvest services. This has caused some growers to wait a bit longer than desired to begin their harvest. 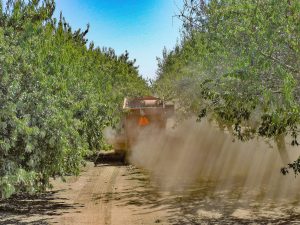 Compounding the complexity of the harvest, variable crop maturity has been widely reported, with areas of green, immature nuts in many orchards causing growers delay shaking by a few days. Observers in the southern San Joaquin Valley and along the west side of the entire Central Valley have also reported rapid development in the pollinizer varieties. Thus, while many are waiting to have their Nonpareil shaken, some with advanced plantings have already begun shaking pollinizer varieties. Observers in the southern San Joaquin are reporting that growers there have already begun shaking all but the last-to-harvest Fritz variety.

Reported yields on the orchards hulled or shelled thus far have been quite variable, with best production levels noted in the southern San Joaquin Valley, which experienced commensurately better weather during the bloom. However, one must remember that it is still early in the harvest, with the vast majority of the state’s orchards yet to be received and weights established. Observers are reporting that apparent quality levels of the crop received thus far have been quite good, with NOW damage running lower than last year’s levels. This is particularly notable given that many southern San Joaquin Valley growers experienced significant damage levels in 2017 and 2018. To be sure, there have been orchards with excessive damage levels. Not surprisingly, observers have reported that orchards with the poorest mummy removal during the last winter experienced the greatest pressure during the hull split. Further, plantings that received a single hull split treatment for NOW are experiencing the greatest degree of damage. As a result, growers and Pest Control Advisors continue to monitor NOW development and many have been planning on additional controls to protect their pollinizer varieties. However, the previously noted rapid pace of development may preclude the ability and /or the need for additional treatments.

The tight harvest timing has also complicated irrigation management decisions. Observers have reported increasing stress levels under the higher temperatures and growers in the southern San Joaquin Valley are reporting growing populations of web-spinning mites. Growers must work to balance the need for irrigation with proper shaking timing and any need for insect or mite management. Needless to say, this is a busy time of year. 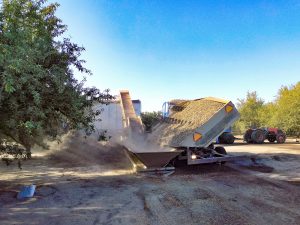 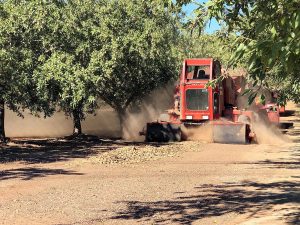 Pickup up the crop – Colusa County 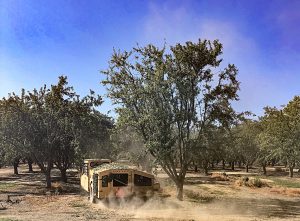 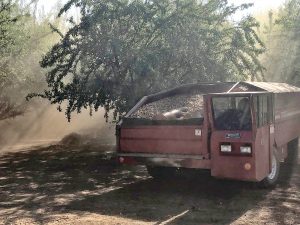 Shuttle truck transporting the crop from the orchard – Butte County