Overview –
With the 2017 crop bloom rapidly approaching, the ABC Position Report issued today reinforces the strong demand trends seen all year. Receipts rose just above the 2.1 billion lb mark, with a bit more to receive over the next 90 days. January shipments of 165.8 million lbs showed continued strength, up 28% over last year. Notably, the U.S. market increased 28% for January, equaling the rate of increase in the combined export markets. U.S. shipments rose 15% above last year, a strong rebound fueled by more moderate and stable 2016 crop almond pricing.

With seasonally strong January new commitments of 159 million lbs, the total California almond supply is ~65% shipped and committed. The outlook for ending inventory in July appears flat to declining from last year’s 412 million lbs. Ample rain and snow lead into the 2017 bloom. For the next 2-3 weeks, attention will be focused on the mixed weather patterns forecasted. 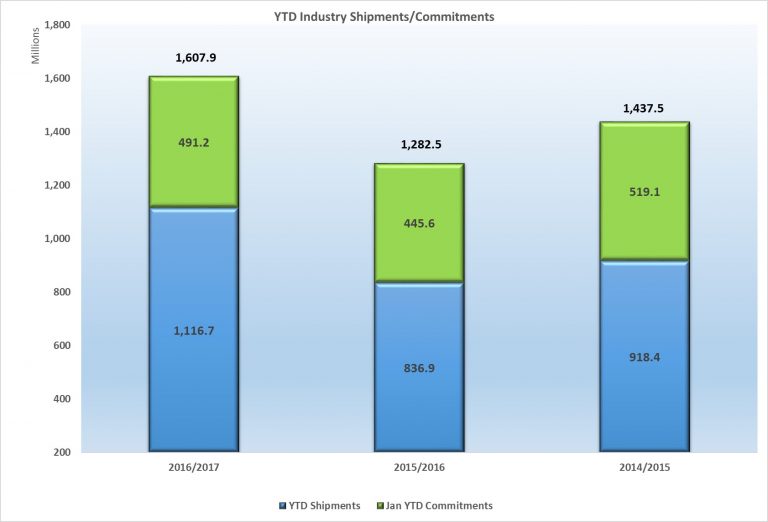 The 2016 crop continues to be consumed at a rate that indicates an ending inventory flat to declining from last year’s 412 million lbs.

Prices continue trading in relatively tight ranges, with less change in the past few weeks.

With 65% of the crop shipped and committed, continued strong demand, and a mixed weather forecast for the bloom, prices will not likely move significantly until there is a better sense of the 2017 supply. We continue to see relative tightness in Nonpareil supply, resulting in a larger price gap. before the 2016 crop year is over.