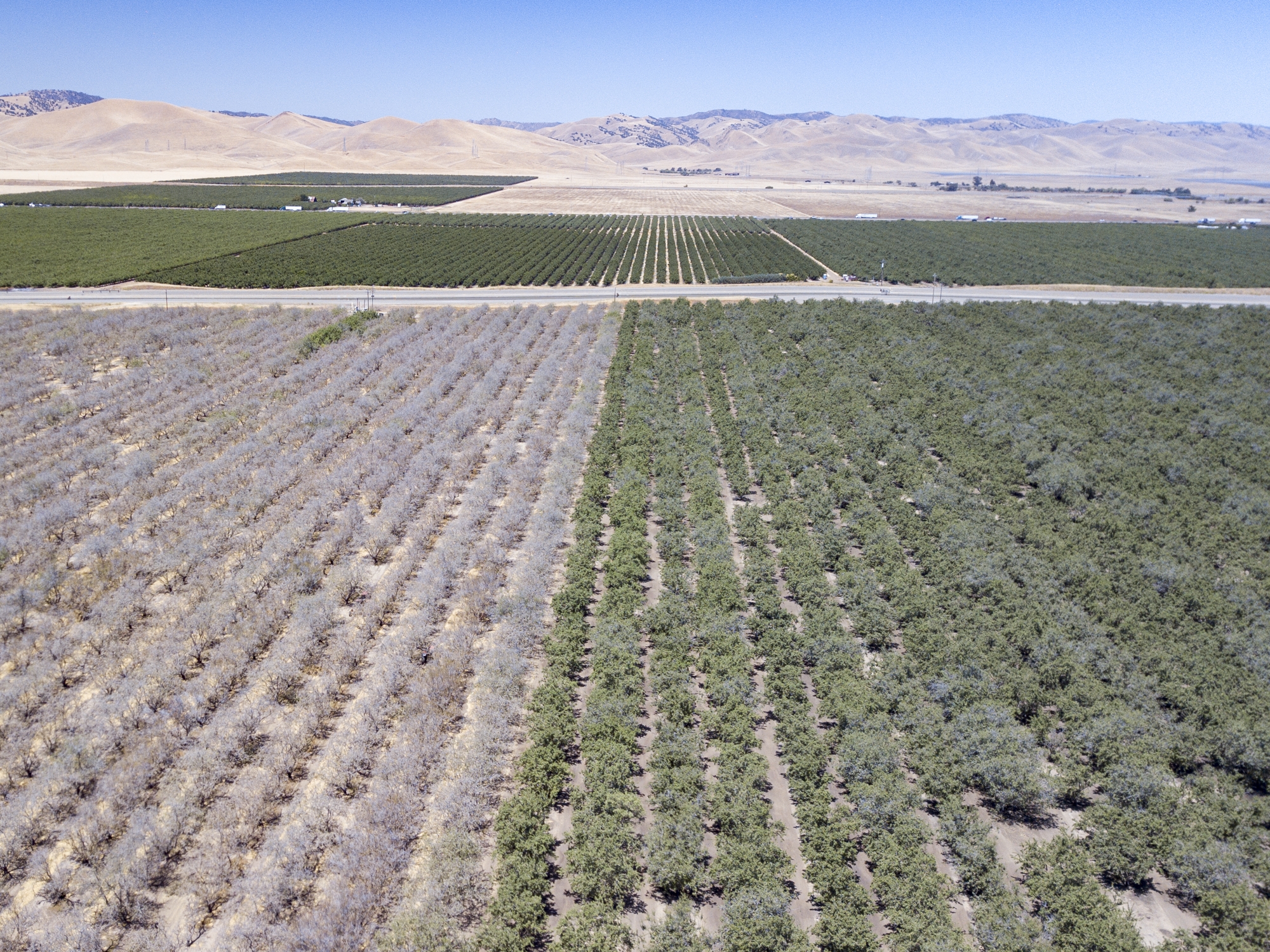 This report covers conditions and observations made between Monday, June 28 and Sunday, August 1, 2021. The next scheduled report will be posted on Monday, August 30, 2021. In the event of any significant occurrences prior to that date, this site will be updated as soon as possible.

Hot conditions dominated the weather throughout California’s Central Valley during July. Daily maximum temperatures approached or exceeded the 100-degree mark on the vast majority of days during the period. Highest readings were reported in the San Joaquin Valley, where temperatures reached as high as 112 degrees. Meanwhile, morning lows also maintained a warm profile, with readings in the Sacramento Valley dipping into the upper 50’s to lower 70’s, while readings in the San Joaquin Valley ranged from the mid and upper 60’s to upper 70’s and occasionally lower 80’s.

Monsoon conditions accompanied the high temperatures, compounding the physical perception of the heat. In addition to the high humidity, scattered showers were reported in the southern San Joaquin Valley and northern Sacramento Valley. Rainfall totals failed to reach significant levels, only serving to settle the dust in the “wettest” locations.

Growers spent July making final preparations for the 2021 harvest. Hull split treatments to control Navel Orange Worm, NOW, were a prime consideration along with applications of baits designed to target ant species that feed on nuts while they lay on the orchard floor. As noted in last month’s report, web-spinning mites have been more problematic this year, leading to control measures included with NOW treatments. The high temperatures have complicated grower efforts to provide water to the maturing crop and limited water supplies have increased stress levels in many areas. Growers must complete irrigations while maintaining the ability to enter the orchards with machinery to mow excess vegetation, and complete necessary treatments for NOW and ants. By the end of the period, observers in all areas of the Central Valley are reporting that growers with Nonpareil and Independence plantings were making their final pre-harvest irrigation in preparation for shaking. For some growers in areas with more limited water supplies, this will be their final irrigation for the year.

There have been widespread reports of the drought impacts on California’s almond crop, particularly in the southern San Joaquin Valley. Impacts on the crop vary greatly, from area to area and orchard to orchard. A number of orchards have been removed or abandoned in place, mainly among older, lower producing plantings in the southern San Joaquin Valley. Impacts from insufficient water and from poor quality water can be easily found, in many cases adjacent to, or very near orchards with no apparent problems. While the attention has been focused primarily on the southern San Joaquin, all areas along the west side of the Central Valley are being impacted. Water quantity and quality remains a prime concern for growers in all areas, north, central, and south.

Growers sent shakers into their orchards in mid-July, dropping the crop in the most advanced and/or water stressed plantings along the west side of the Central Valley. Assisted by the high temperatures, sweepers followed within a few days and crop from several west Fresno County orchards was picked up, hulled and/or shelled and delivered to processors during the final week of the month. The warm nighttime temperatures in particular have pushed the pace of crop development this year, leading growers to report that their harvest is running approximately one week ahead of last year. Observers in the Sacramento Valley are reporting that many growers along the west side will begin shaking during the first week of August, with those in the balance of the region expected to start during the second week. Observers in the San Joaquin are reporting that shaking in advanced orchards along the eastside foothills is anticipated during the first week of August, with advanced plantings along the Highway 99 corridor not expected to begin until mid-month. Observers have also reported the initiation of hull split in several pollinizer varieties, including the later harvesting Butte and Padre. This apparently compressed maturity has led to grower speculation that the harvest will proceed rapidly with many eliminating the normal practice of irrigating between varieties.

Growers and huller/sheller operators are watching the wildfires currently burning around the state. All remember the impacts on the crop and harvest operations in 2020, when the southern monsoon spawned dry lightning storms on both sides of the Central Valley in mid-August, resulting in unprecedented wildfires. Heavy smoke blocked the sun last year, inhibiting crop drying as the nuts lay on the orchard floor, while ash dropped on the trees conspired with high humidity to promote fungal infections on leaves and hulls. Thus far, smoke coverage has been more prevalent over the Sacramento Valley and no where near the intensity experienced last year. All are hoping for a clean, trouble-free harvest this year. 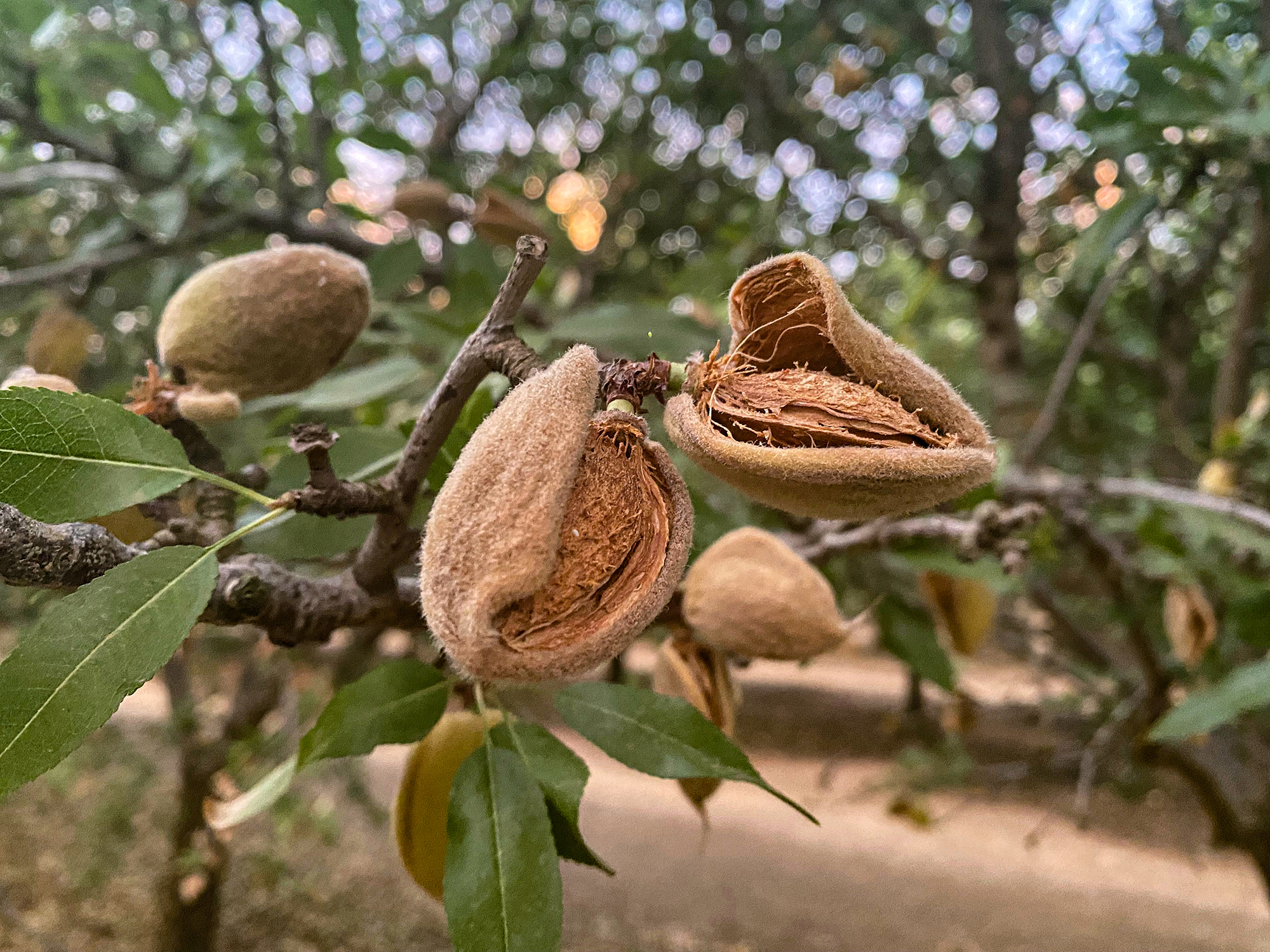 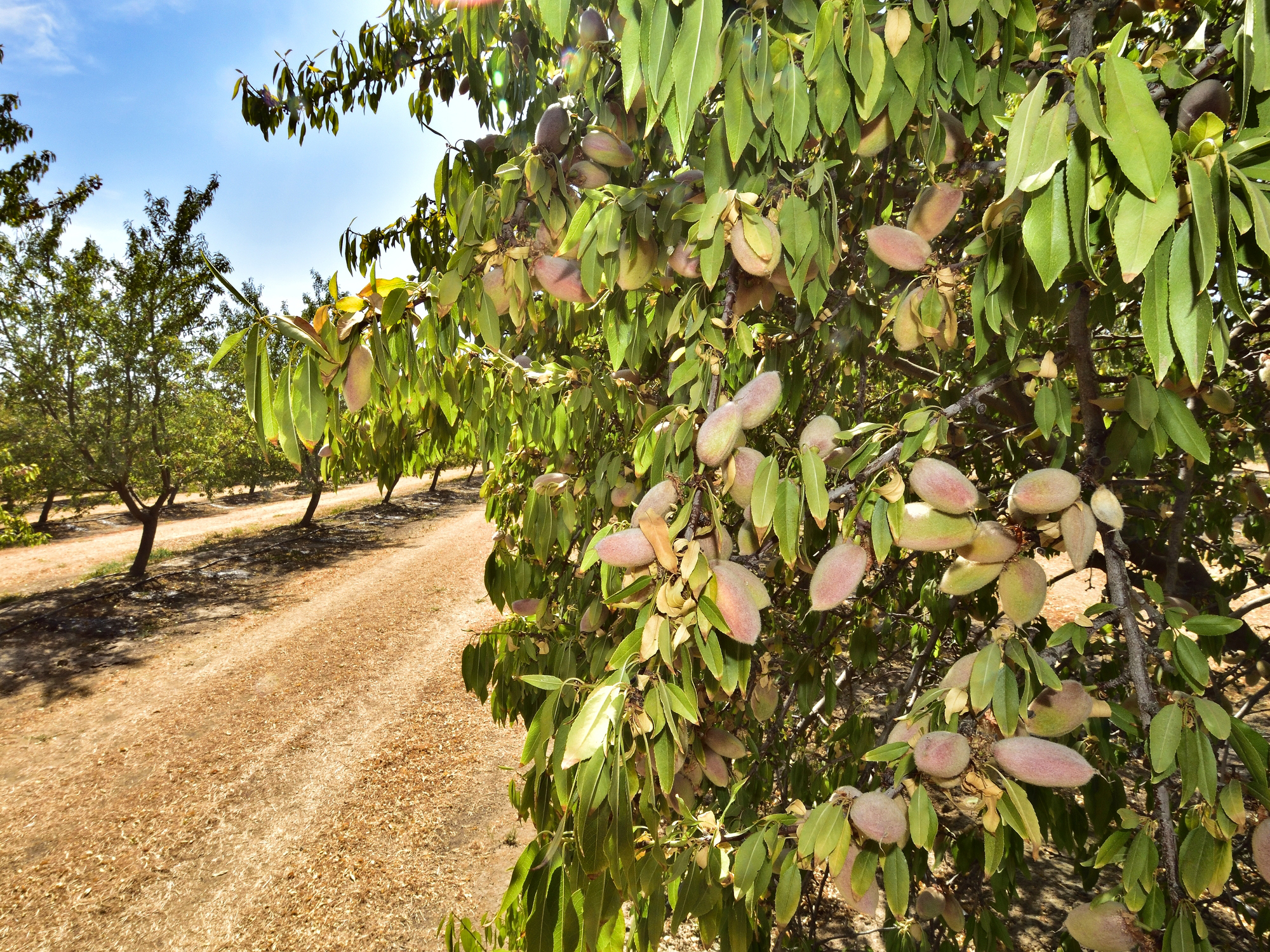 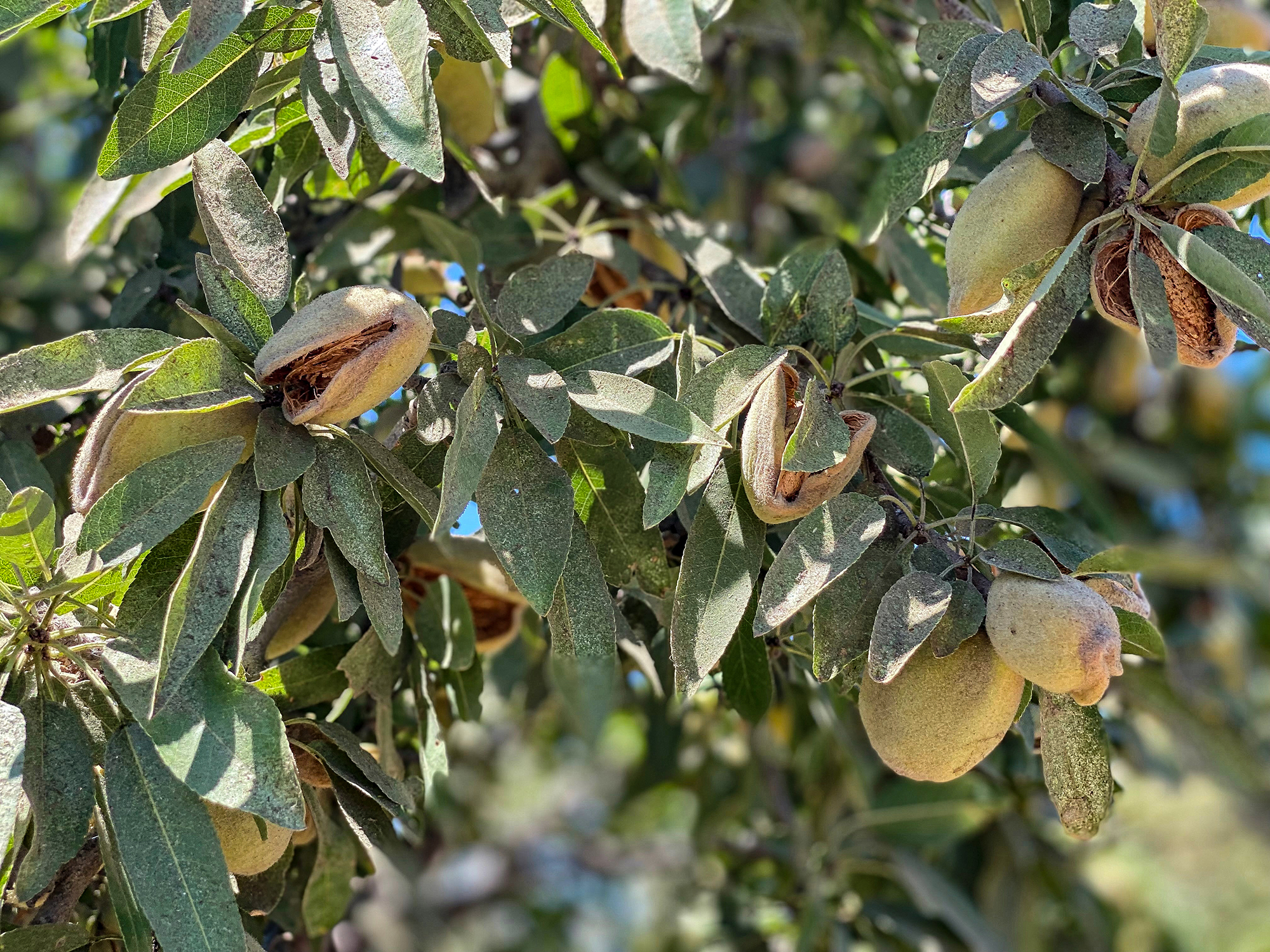 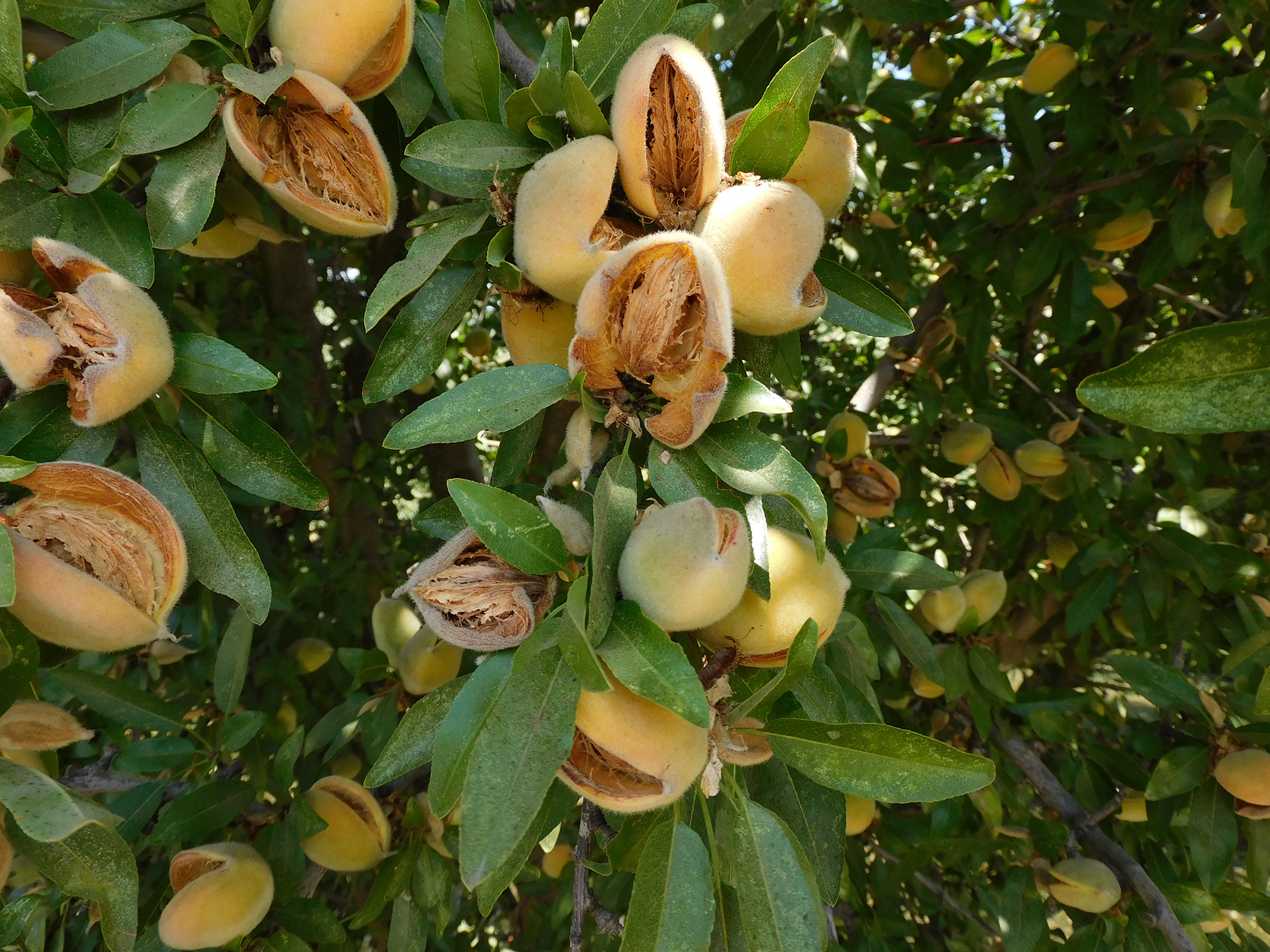 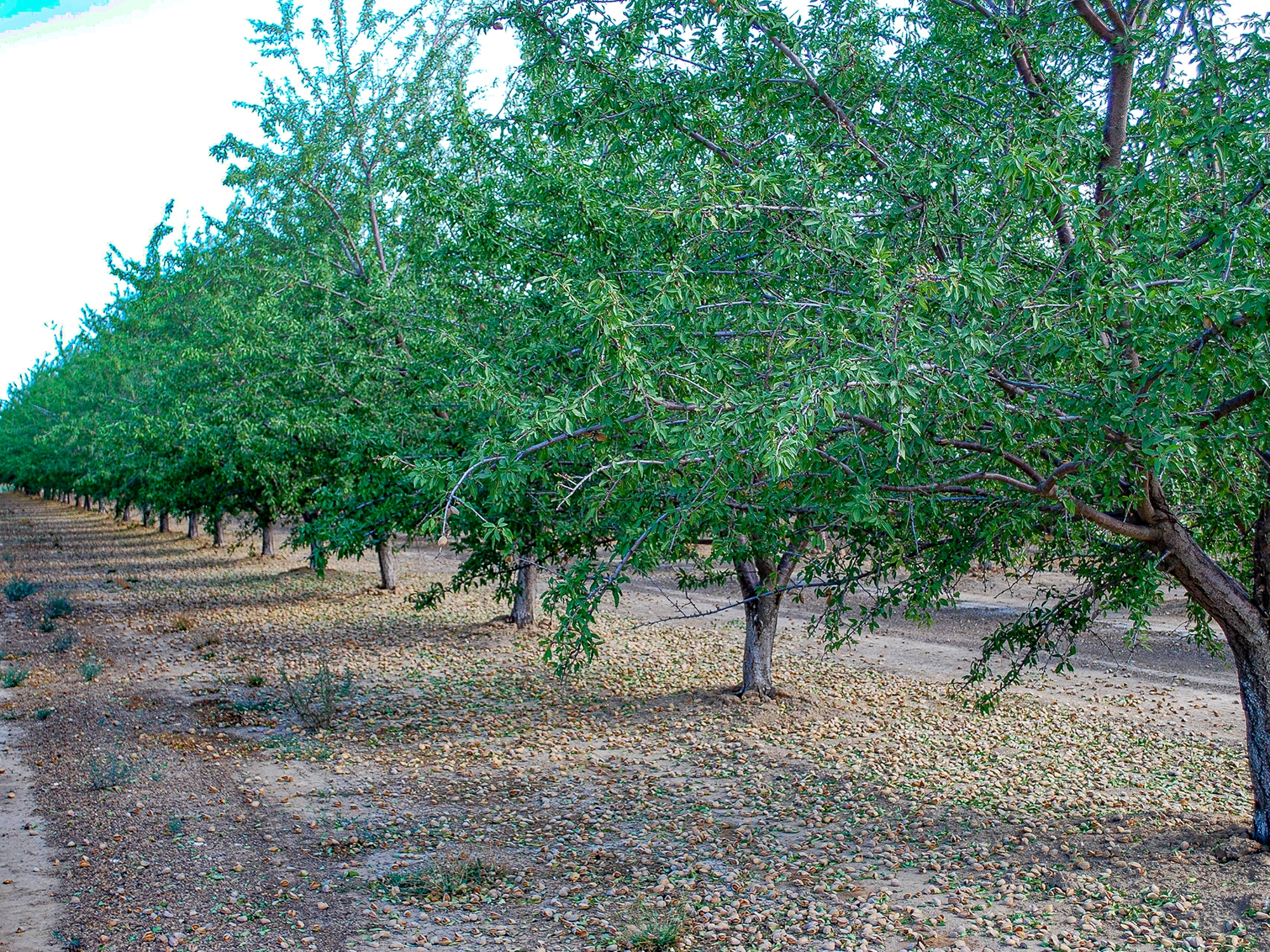 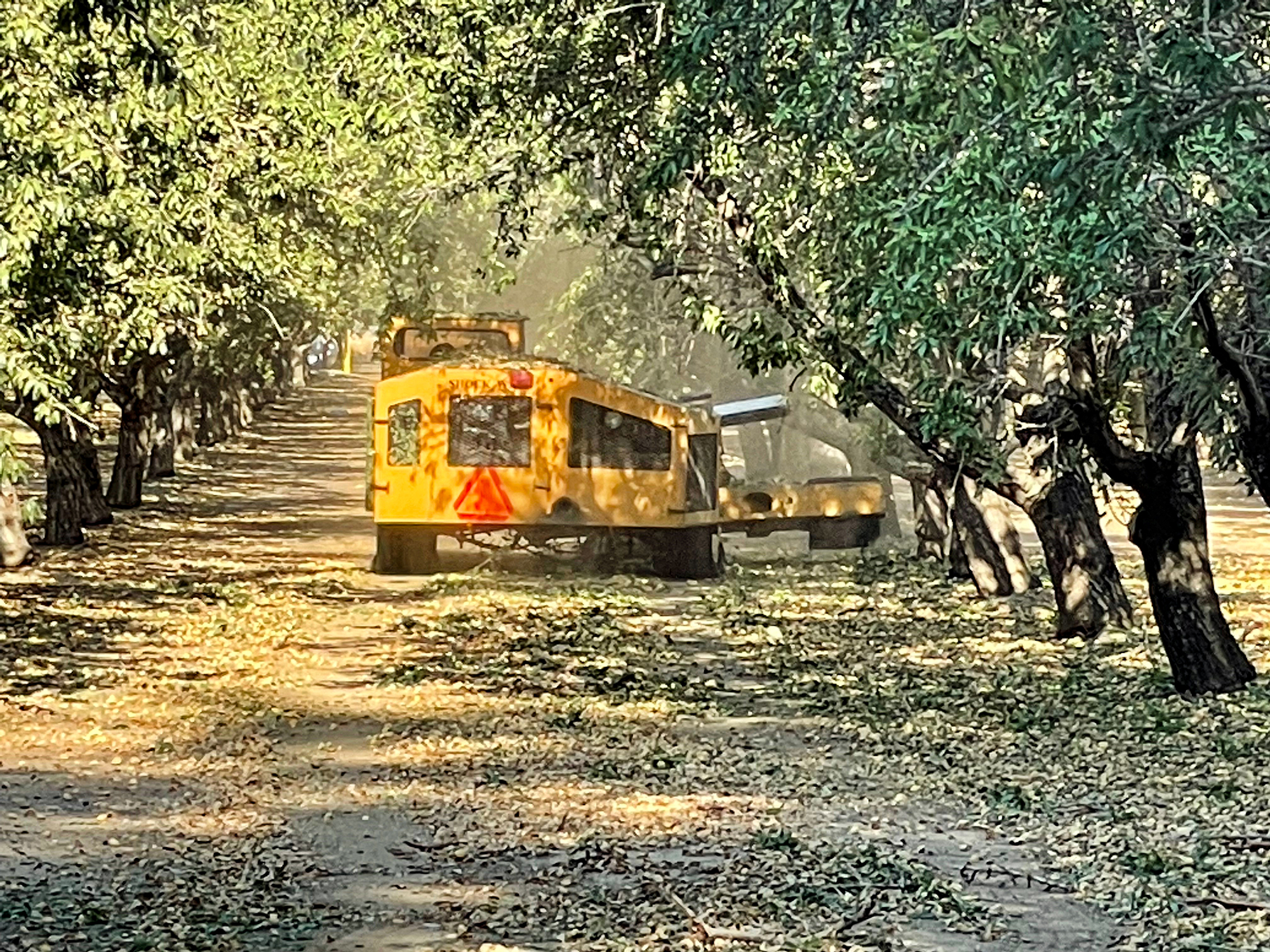 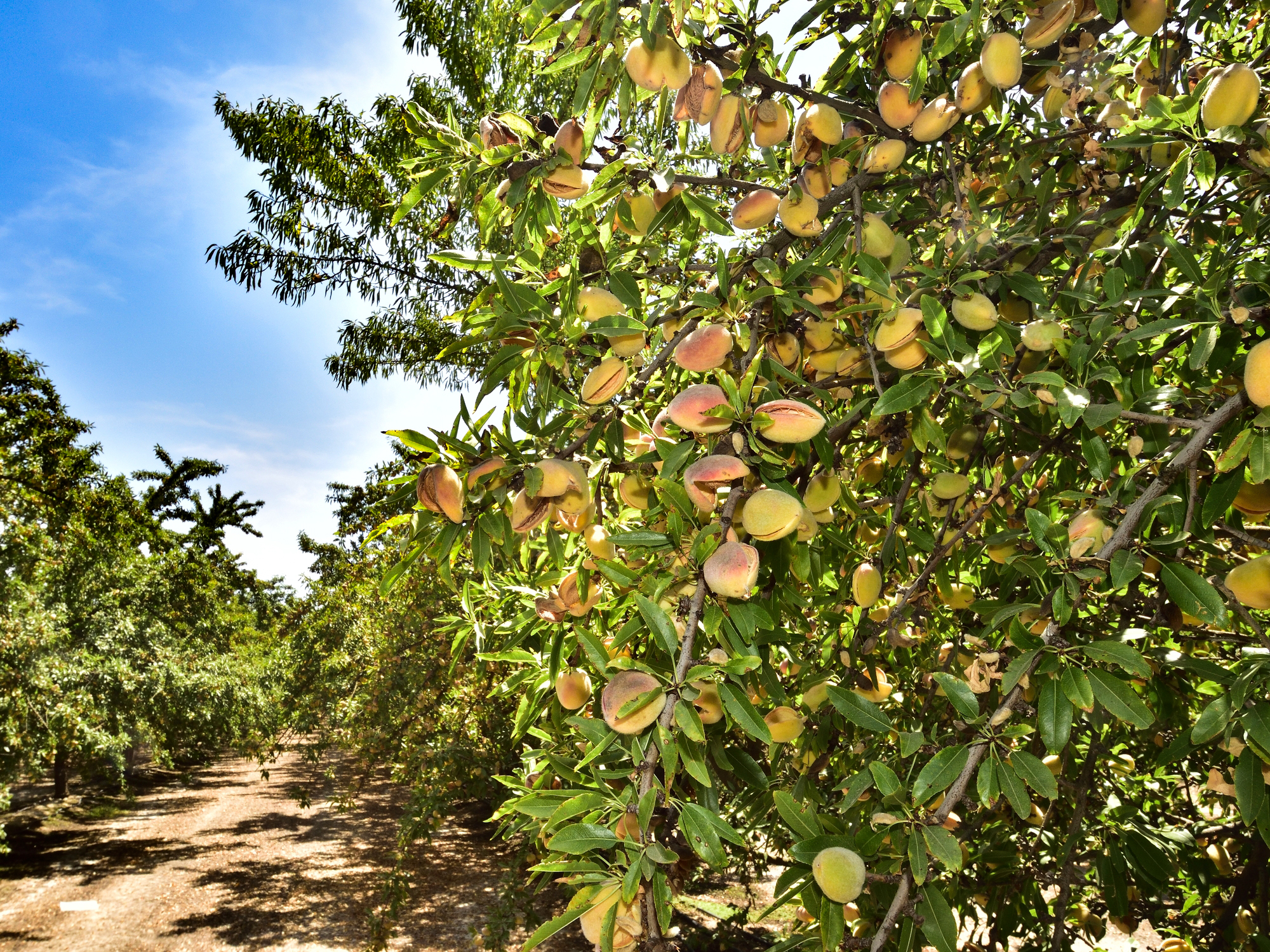 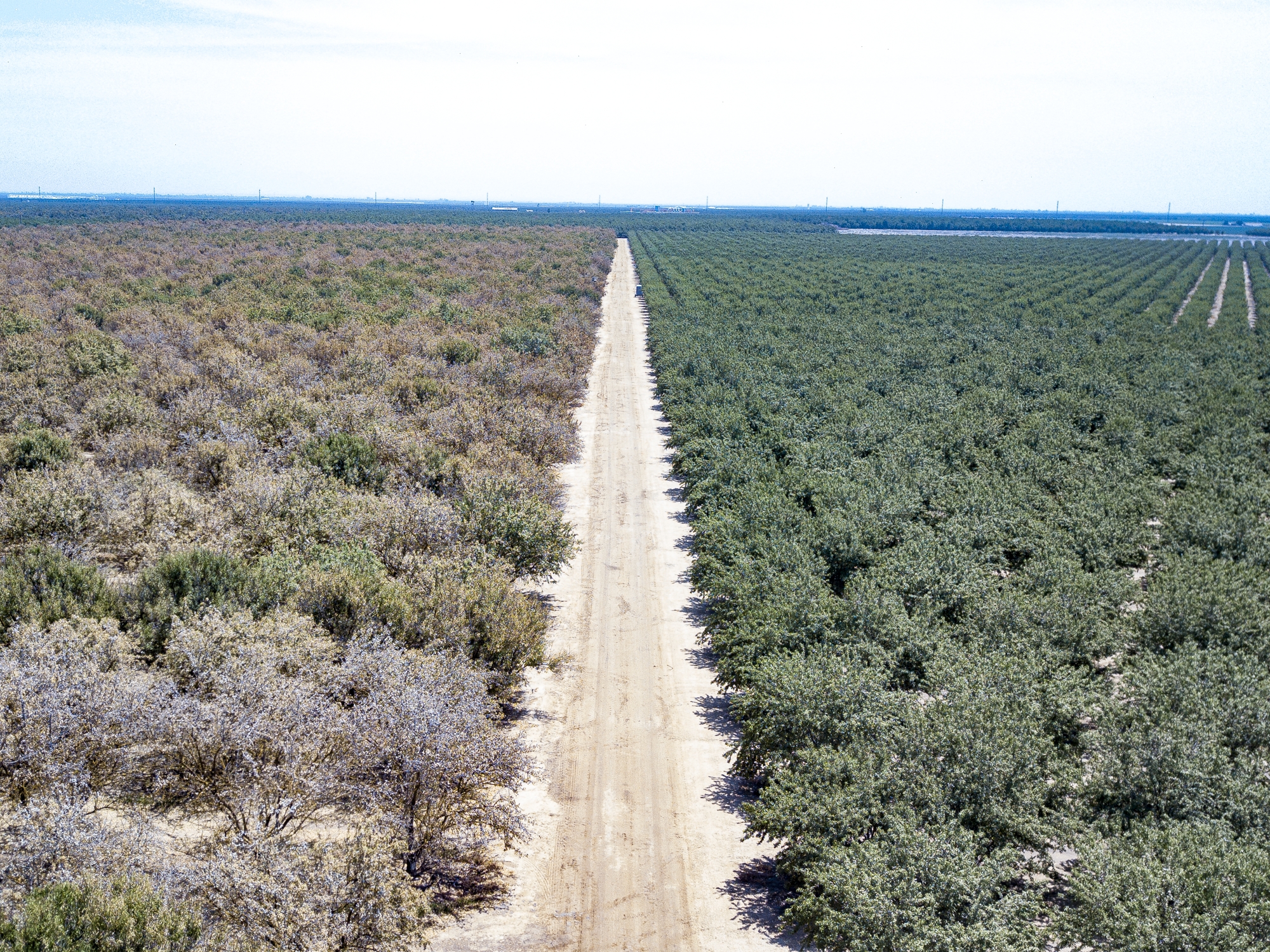