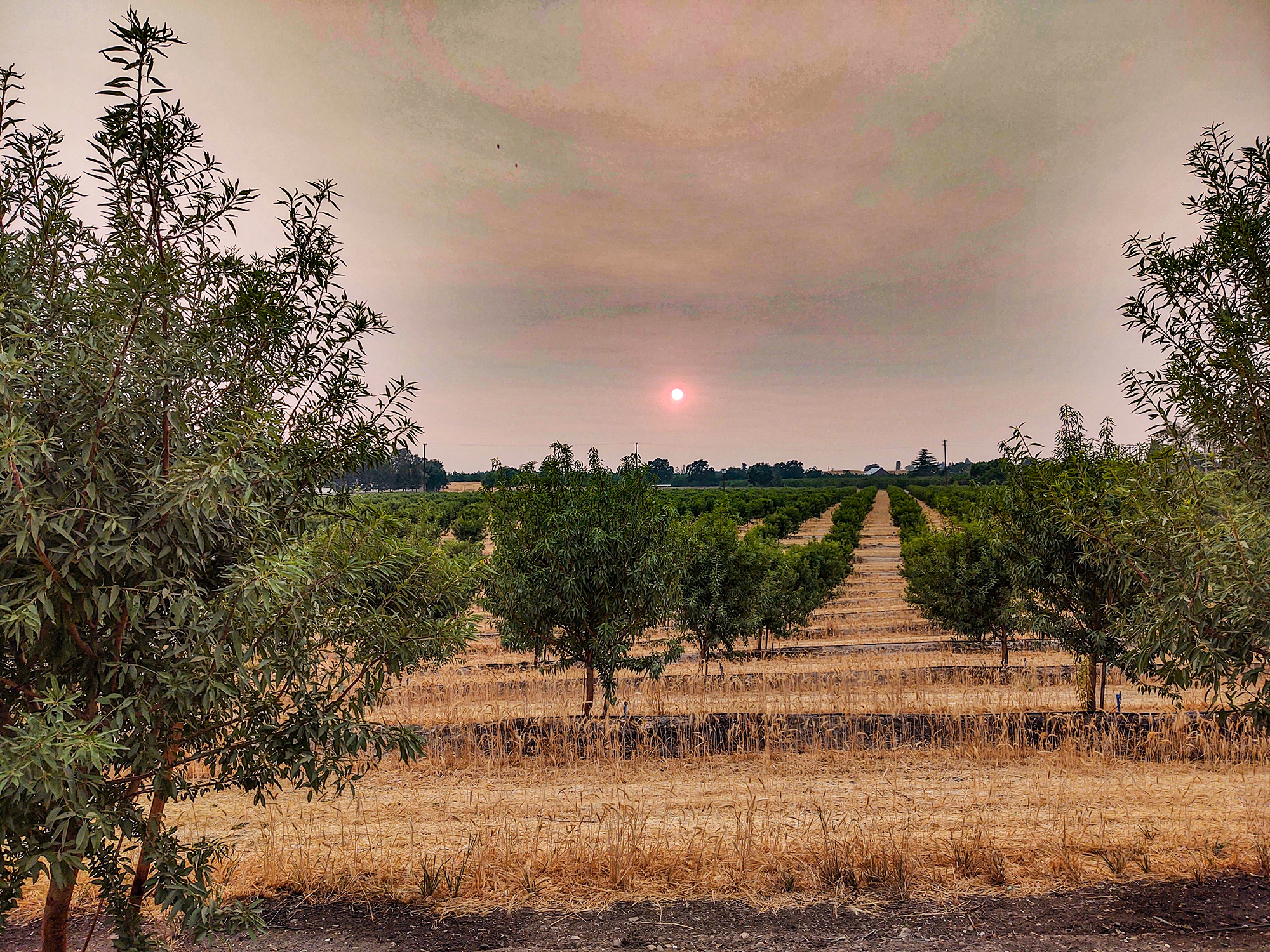 This report covers conditions and observations made between Monday, August 2 and Sunday, August 29, 2021. The next scheduled report will be posted on Monday, September 27, 2021. In the event of any significant occurrences prior to that date, this site will be updated as soon as possible.

High temperatures and increasingly smoky skies reigned throughout the Central Valley for much of August. Daily maximum temperatures reached their greatest values during the first two weeks of the month, with readings ranging from 92 to 102 degrees in the Sacramento Valley and 95 to 105 in the southern San Joaquin Valley. Conditions changed significantly on August 19, with the arrival of a more moderate air mass, lowering maximum temperatures into the upper 80’s and lower 90’s in all growing areas up until the final weekend of the month, when temperatures once again approached or exceeded 100 degrees.  Morning lows ranged from the mid 60’s to lower 70’s during the hottest days of the month, with readings reported in the mid 50’s to lower 60’s during the more comfortable phase in the final week of the period.

Harvest operations spread throughout the Central Valley during the period as growers worked to bring in the 2021 crop. Shaking progressed from the west side of the Central Valley to the eastside foothills of the San Joaquin, with growers along the Highway 99 corridor starting their harvest during the final week of the month. Growers have focused their efforts on the first-to-harvest Nonpareil and Independence varieties. However, many have noted that co-located pollinizer varieties in many Nonpareil orchards have been progressing rapidly and may be ready to harvest immediately after the Nonpareil have been picked up. Several growers along the west side of the Central Valley have commented that Price, Aldrich, Carmel, and Wood Colony were ready to shake even as they were picking up the Nonpareil. Growers normally irrigate after the Nonpareil has been picked, prior to shaking the next variety. However, stress levels on the orchards are helping to accelerate hull split, making pollinizers more susceptible to Navel Orange Worm (NOW), and encouraging growers to send shakers immediately back into the orchards. For those without water available, they have no option. Observers have reported that the crop is generally shaking easily with few nuts remaining in the trees to harbor Navel Orange Worm, NOW, over the coming winter.

While growers with conventional self-sterile varieties are looking towards their pollinizers, those with self-fertile Independence and Shasta will complete their harvest for the year as their crop is picked up for transport to the huller/sheller or stockpiled for later processing.

As the harvest has progressed, growers have been watching the skies closely, remembering the impacts imposed by heavy smoke produced by mountain wildfires last year. Increased humidity levels, slow crop drying and hull rot in unharvested orchards created significant headaches for growers as the sun disappeared behind heavy smoke for several weeks during the harvest. So far this year, while smoke from the wildfires burning in the Sierra Nevada mountains has flowed into the valley daily, reducing maximum temperatures by a few degrees, the sun has been totally blocked on only a few days. However, the fire season is far from over.

Observers have reported variable quality levels in the crop harvest thus far. Huller/sheller operators have struggled with small kernels when producing meats, as small inshell kernels pass through separation screens within the shelling process. Kernel size is normally associated with the number of nuts within the trees, with higher yields generally producing smaller kernels. However, this year kernel size is more closely related to the stress imposed by higher temperatures and insufficient water during the growing season. Hullers producing inshell have also fought sticktights, where the hull has adhered to the shell, rather than opening, to provide for separation during the hulling process. In both cases, inshell kernels in meat deliveries or sticktight nuts in inshell, the shell or hull is considered foreign material, downgrading the value of the crop. Observers have reported that meat deliveries are exhibiting an elevated number of “peelers”, where the peel/skin is poorly adhered to the kernel and sluffs off during shelling. Since the peel is removed, peelers are considered equivalent to chipped kernels, with a commensurate reduction in value. Peelers are generally considered to be the result of shaking too early before the nut is physiologically mature. However, this year, growers are wondering if stress levels imposed by the high temperatures and insufficient water may have played a role.

Pest Control Advisors (PCAs) noted the start of the third flight of NOW during the second week of the month. This flight, the period in which NOW moths mate and lay eggs on splitting hulls, has now produced pinhole damage, where the newly emerged larvae burrow in the almond kernel, rendering it inedible.

The flow of crop from the orchards will increase significantly over next week as the harvest spreads across the breadth of the Highway 99 corridor. Operations will continue throughout September and well into October as growers work to complete the harvest prior to the start of a hopefully very wet fall and winter season.

Note: Among the photos accompanying this report is a shot of an “Off-Ground Harvester” operating in the Dos Palos area of Merced County. This unit shakes the nuts from the tree and deposits them in a clean, conditioned windrow, eliminating the need for sweeping, thus significantly reducing harvest dust. The most noteworthy limitation of “Shake-Catch” machines such as this one is in situations where winds have blown nuts from the trees prior to harvest. In those cases, the “windfall” nuts would be lost, and growers would have to resort to conventional methods to gather the entire crop. 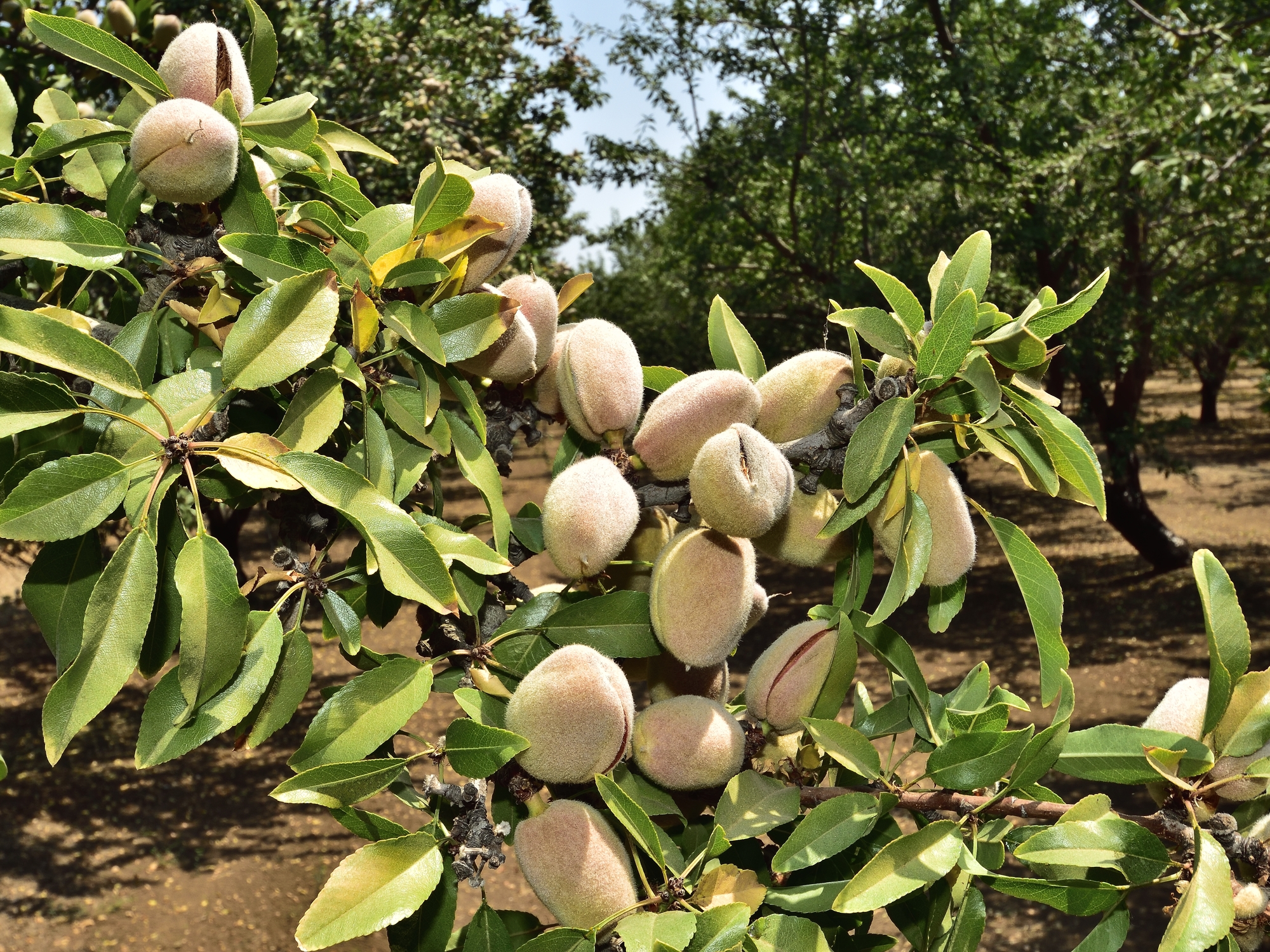 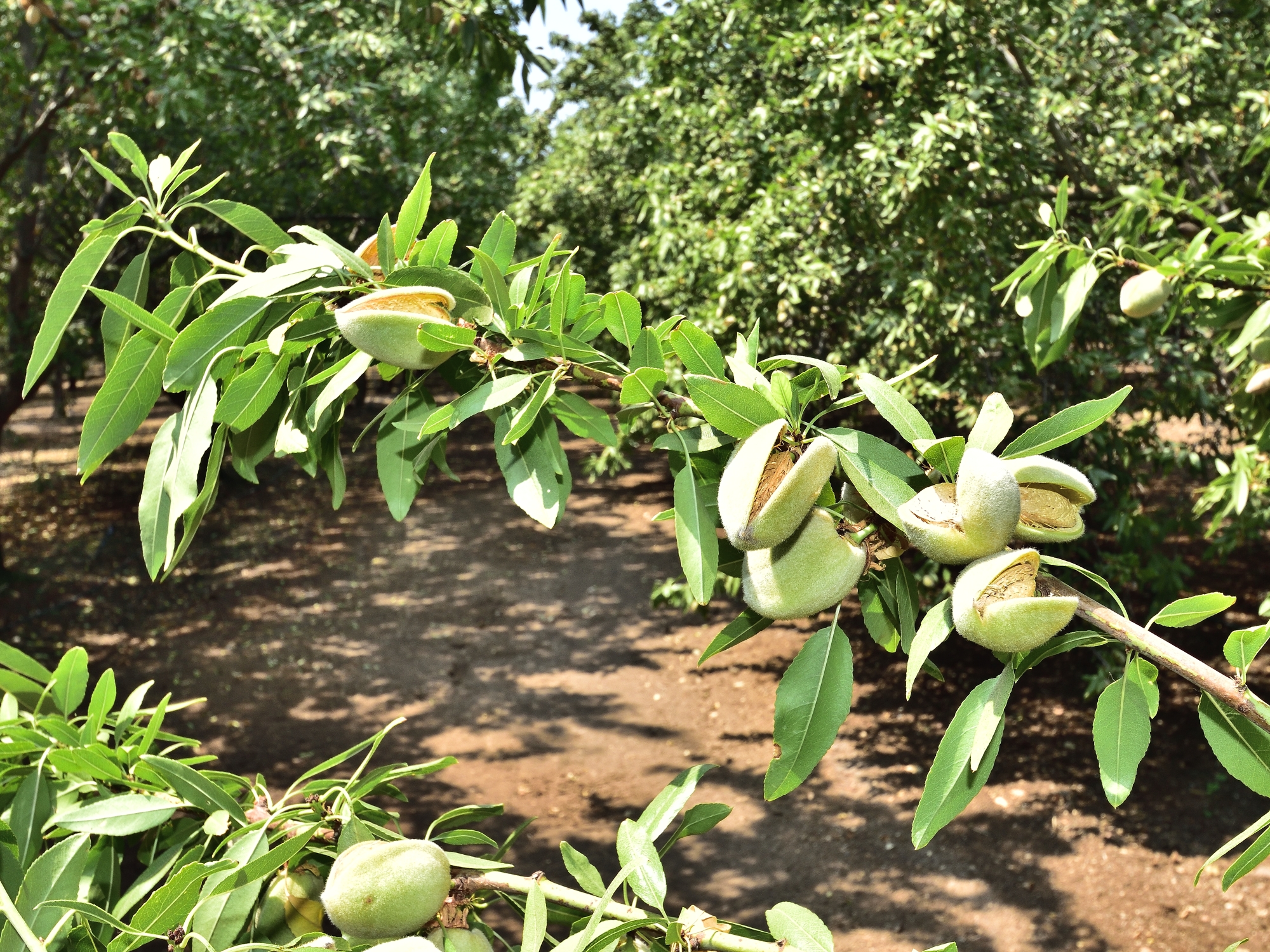 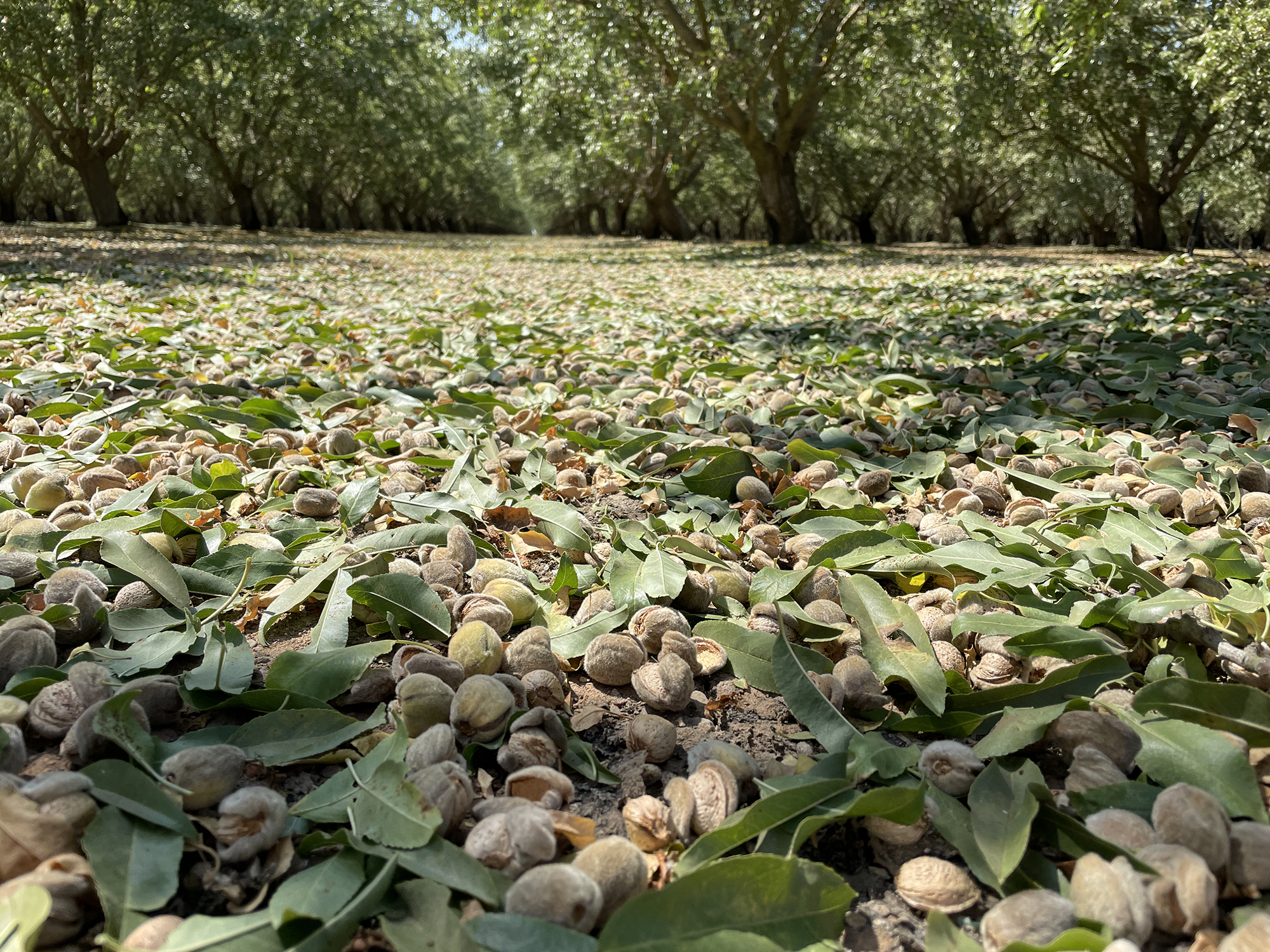 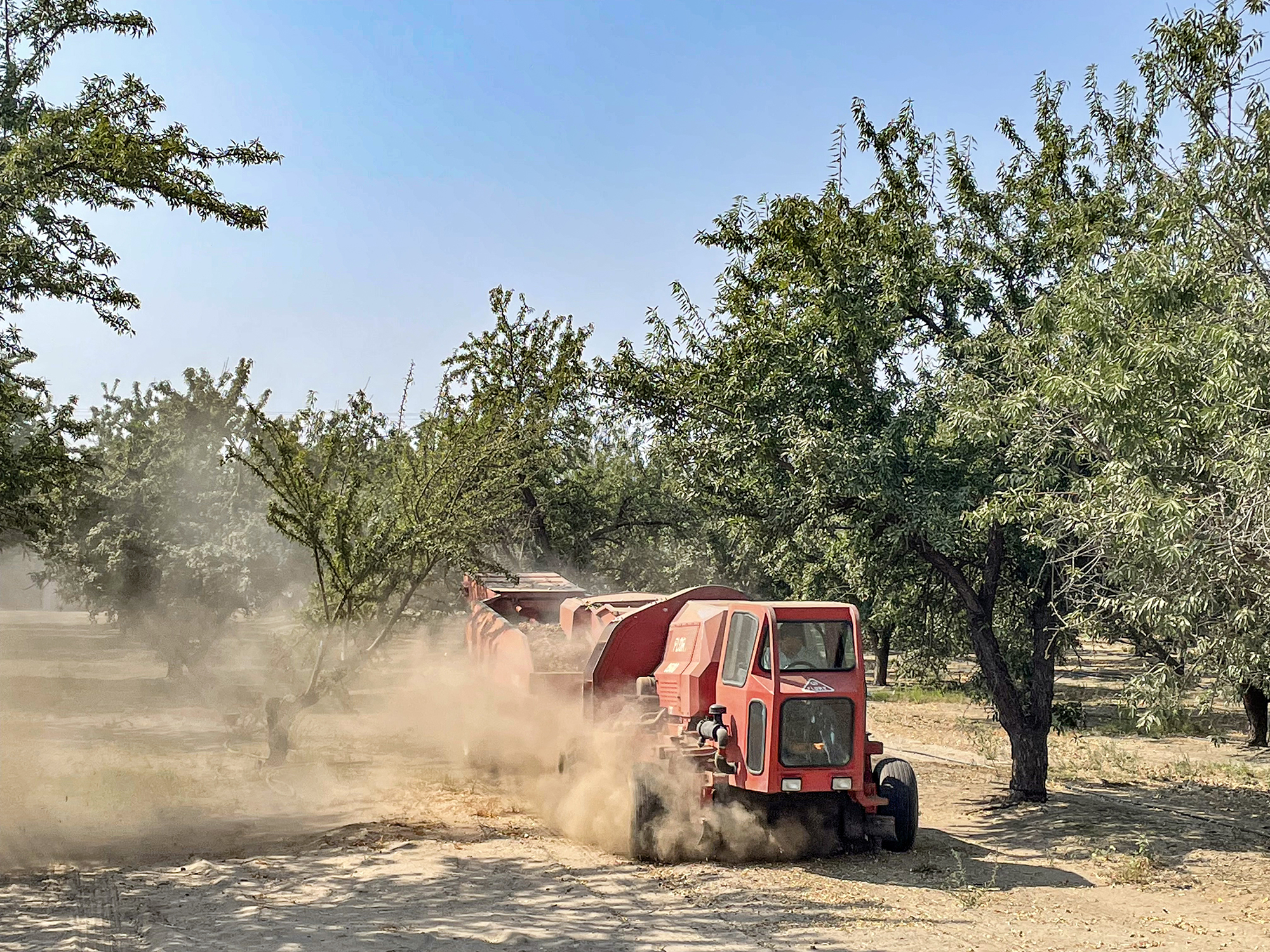 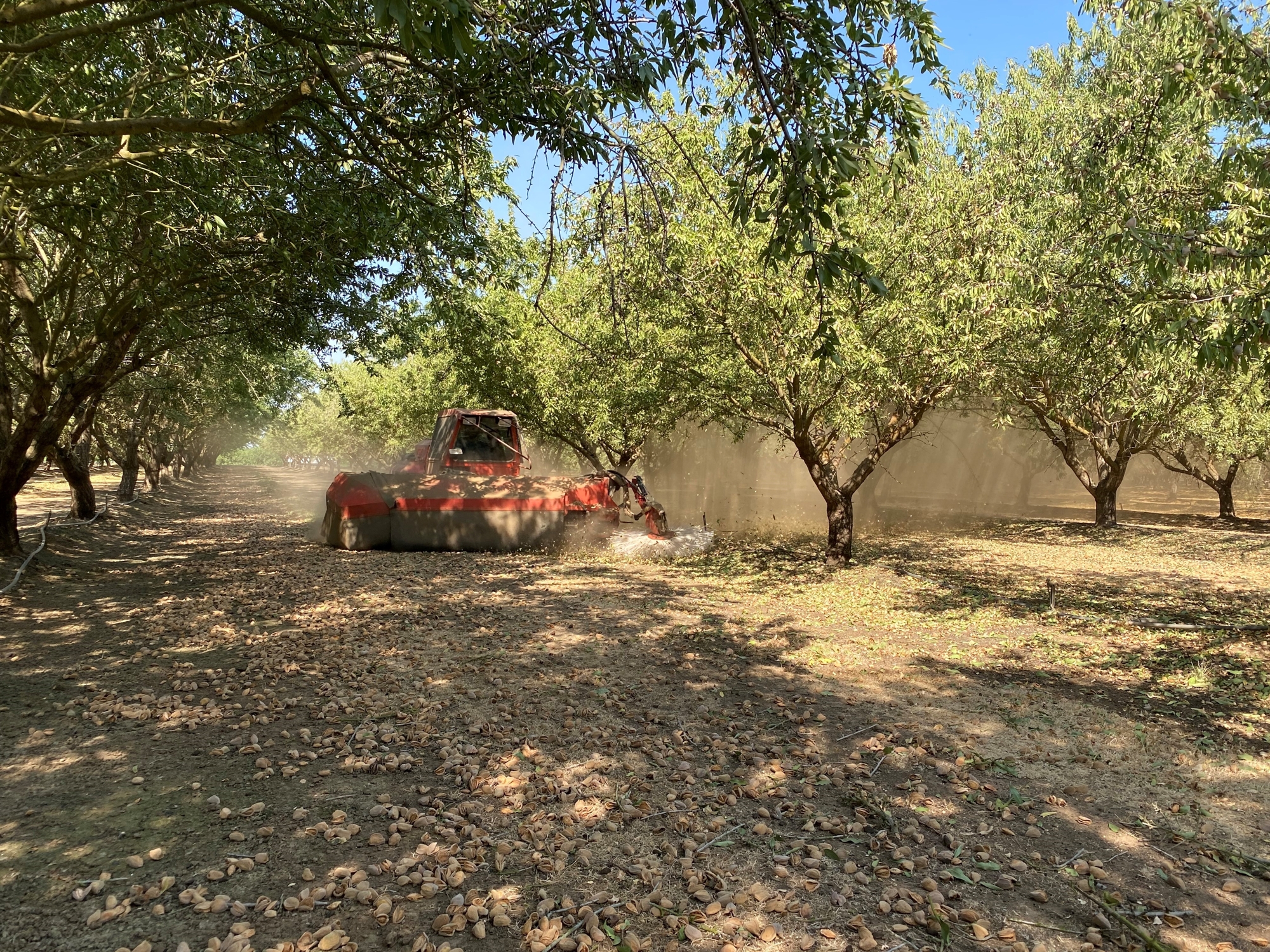 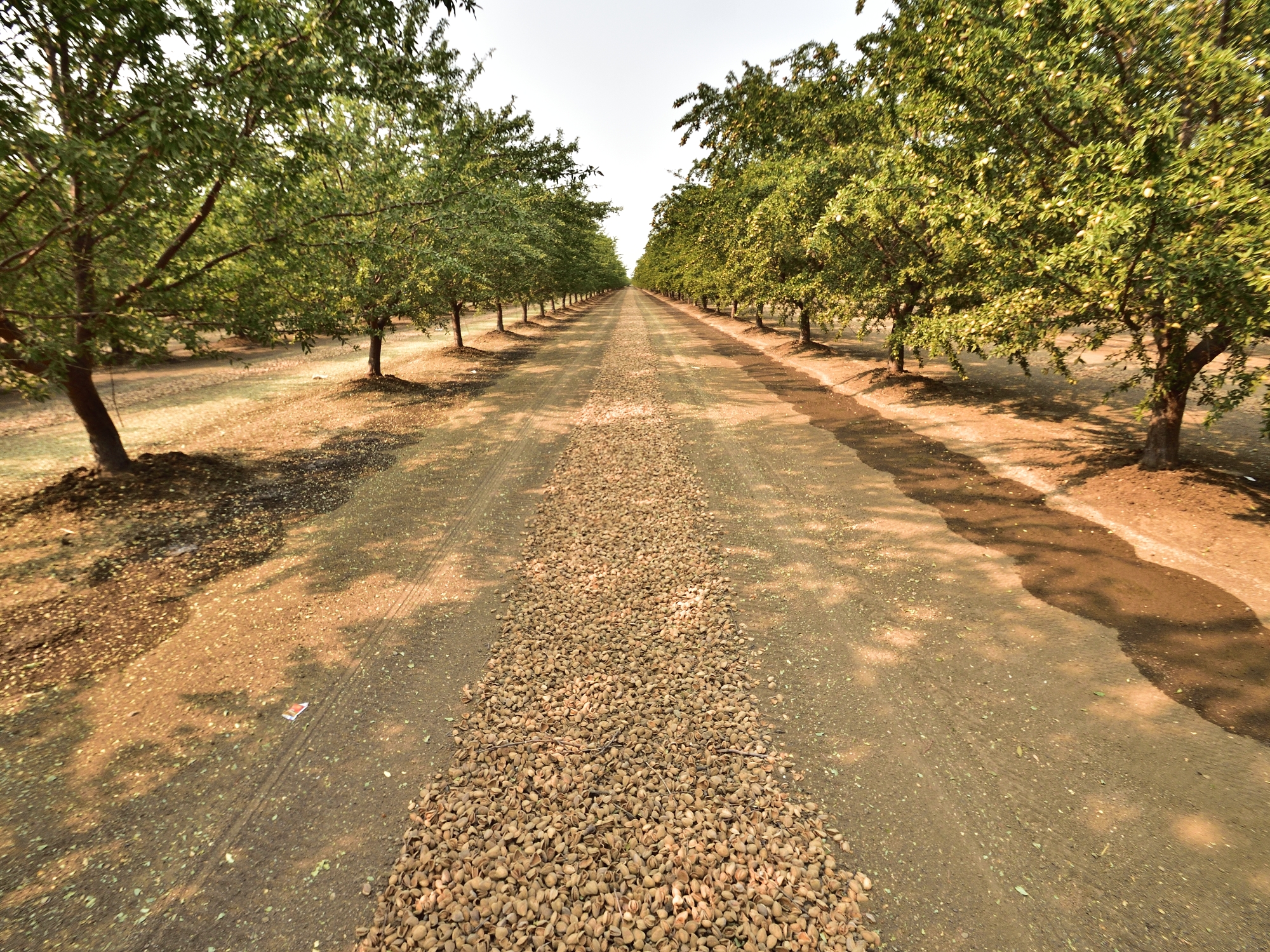 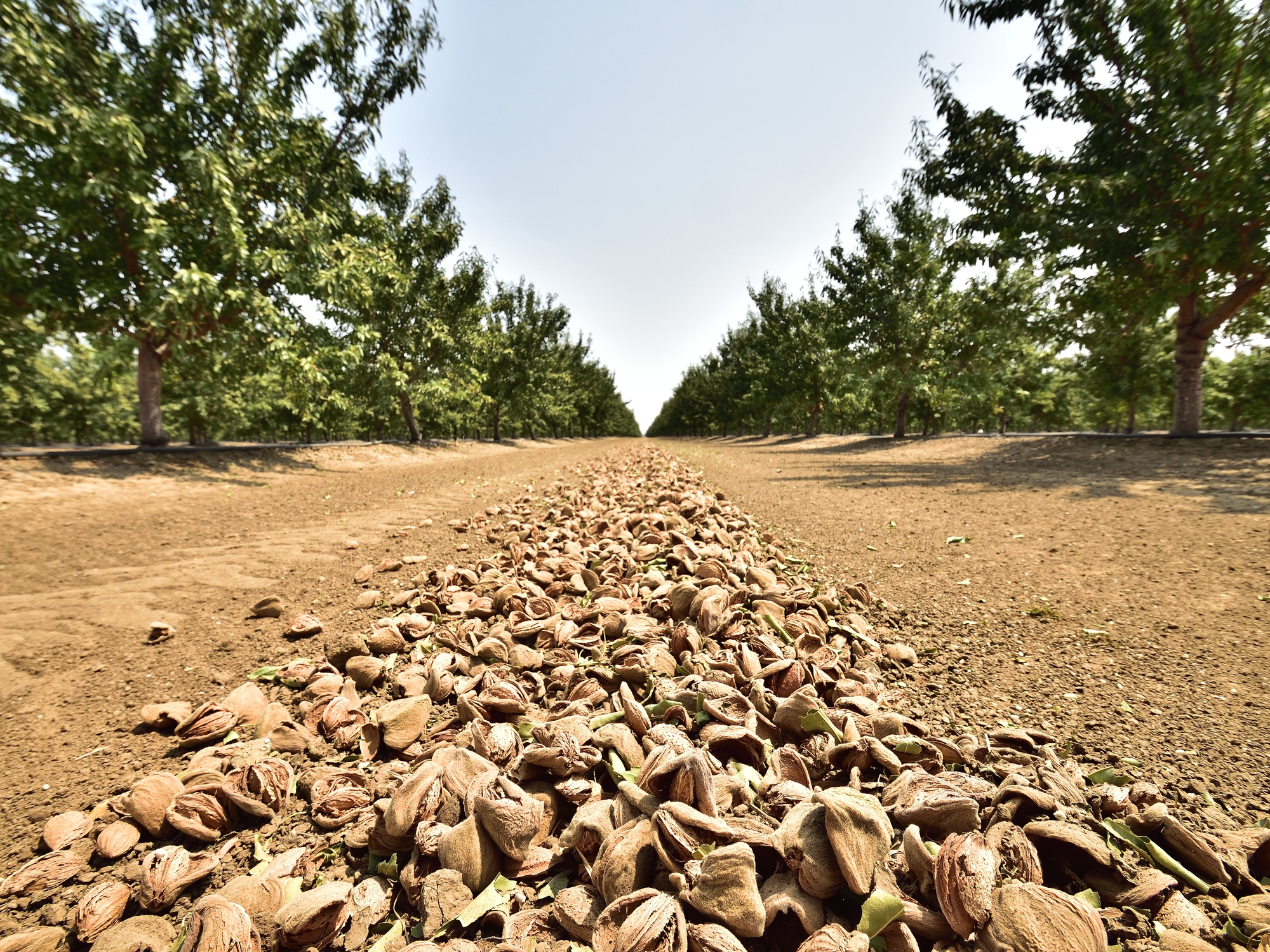 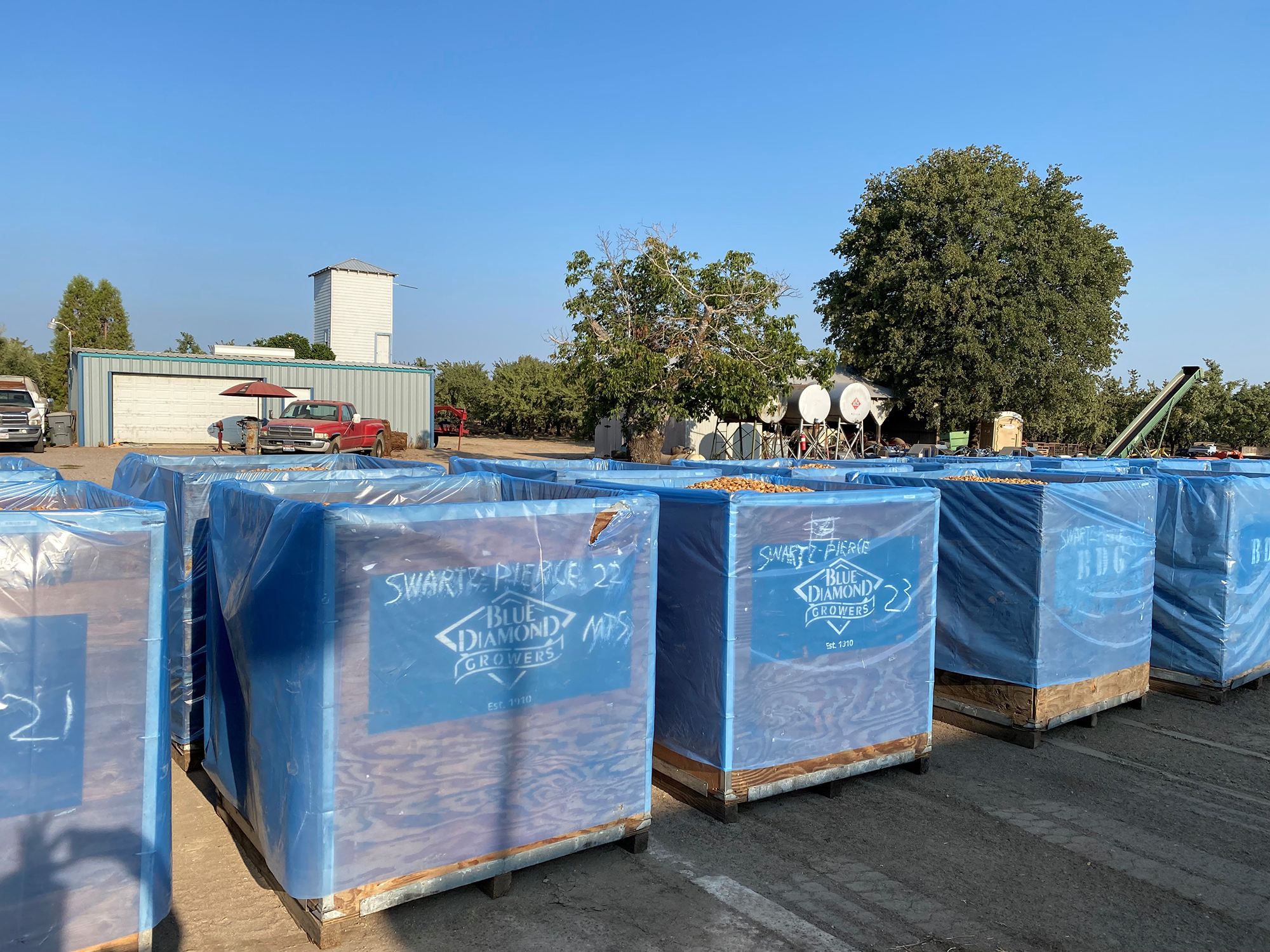 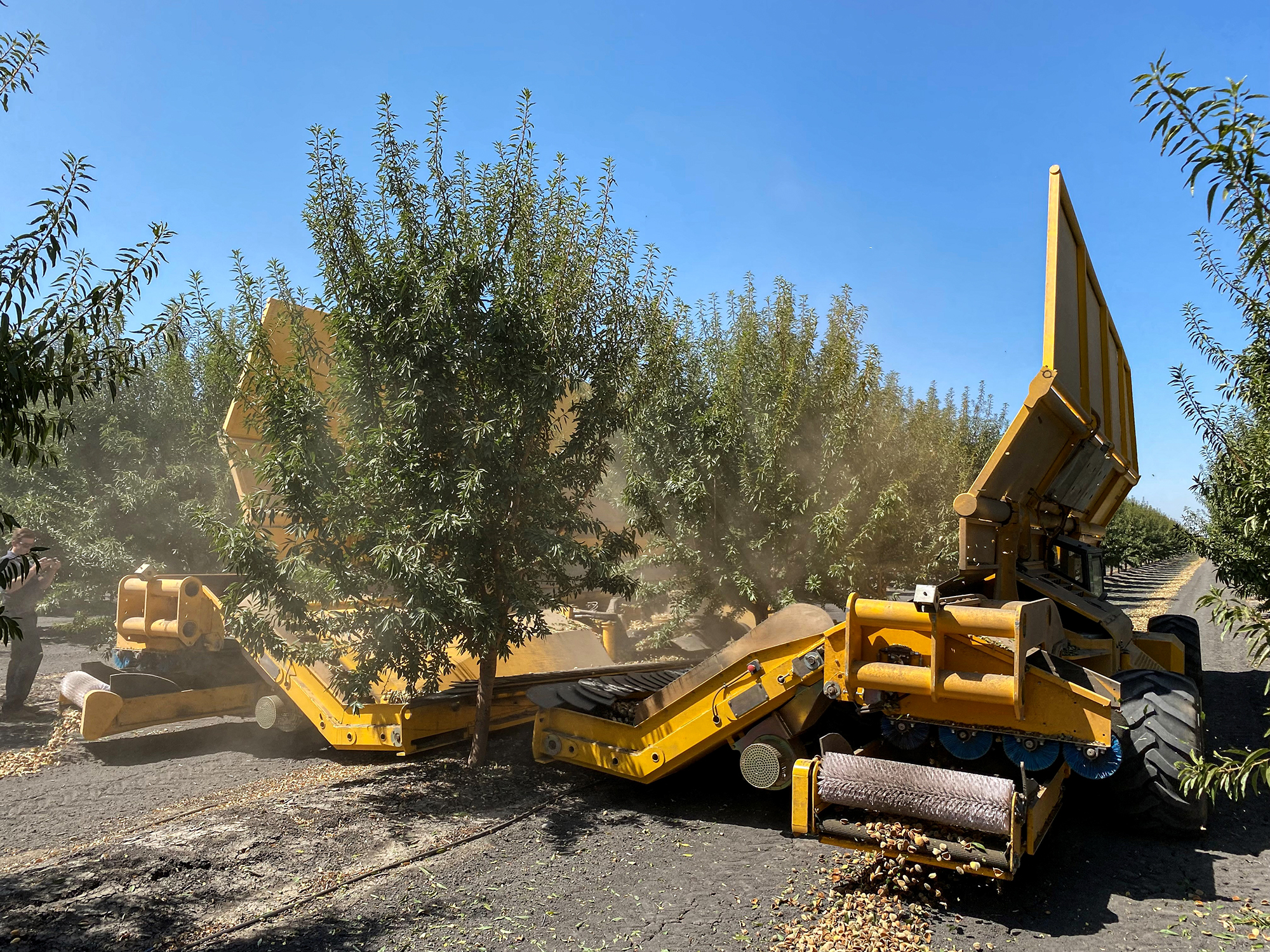 Shake-Catch Harvesting in the Dos Palos area of Merced County