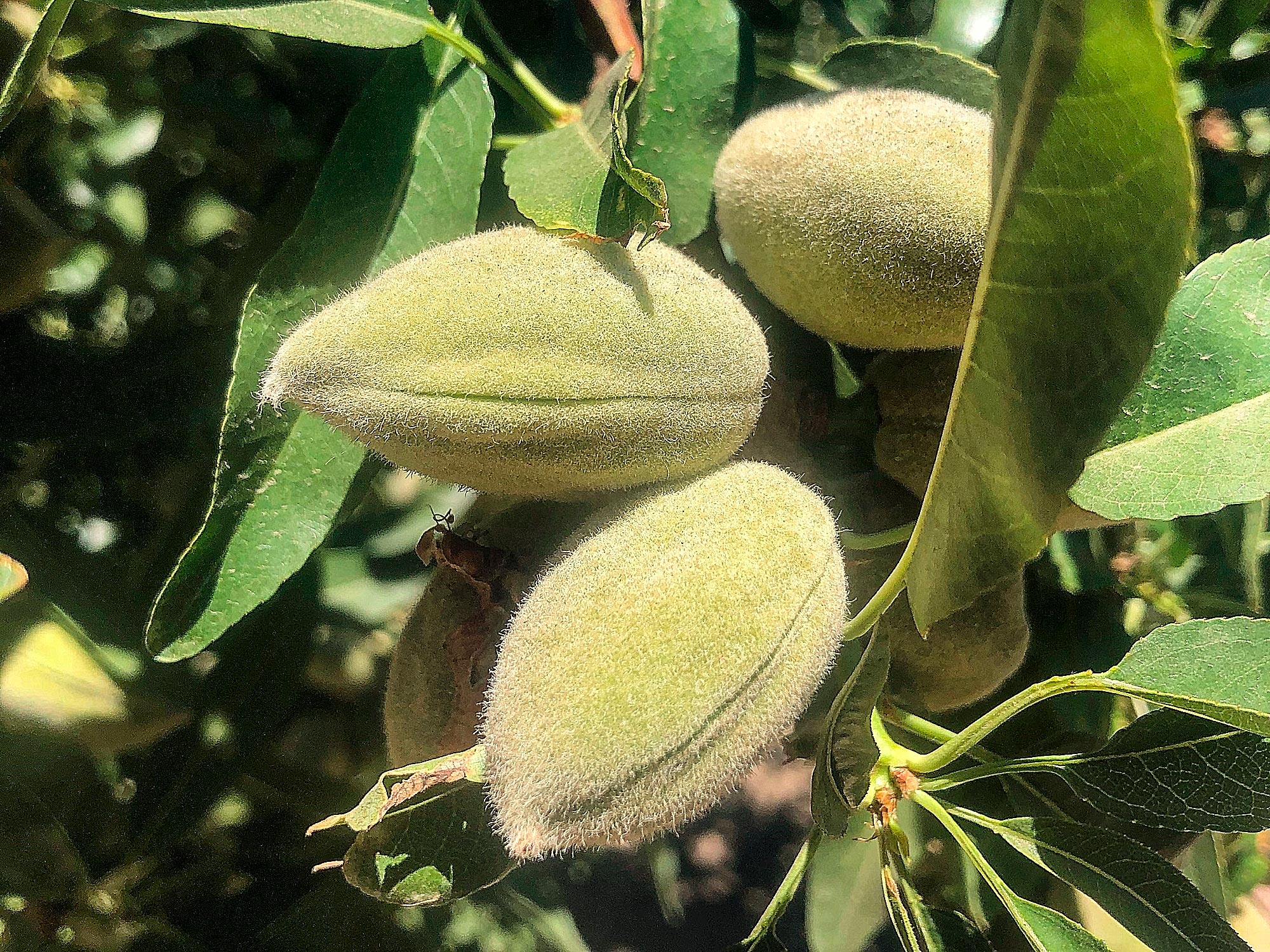 This report covers conditions and observations made between Monday, April 26 and Monday, May 31, 2021. The next scheduled report will be posted on Monday, June 28, 2021. In the event of any significant occurrences prior to that date, this site will be updated as soon as possible.

Clear skies with mild to warm temperatures and blustery winds typified weather in the central valley for nearly the entire month of May. Following the threat of rain in the previous period’s final days, temperatures in the first days of the period were reported in the mid to upper 60’s as the remnants of the weakening storms exited the state. Temperatures then warmed rapidly and were widely reported in the upper 70’s to lower 80’s, with readings on the warmest days reaching into the low to mid 90’s. Forecasters have predicted a heat wave for the first week of June. The reports were confirmed by a significant increase in temperatures in the period’s final days as readings rose to the century mark on May 31. Morning lows followed the trend of the daily maximum readings, ranging from the lower 40’s early in the month to upper 50 as the period concluded.

As may be seen in the accompanying photo, nuts of all varieties are now solidified, or nearly so and thus are at their maximum weight. Growers and their Pest Control Advisors, PCA’s, are reporting abnormally high counts of Navel Orange Worm eggs caught in traps placed in the orchards to monitor female activity. Growers and the PCA’s will continue to monitor activity in order to properly time treatments with the insect’s most susceptible and potentially most damaging stage of development during the hull split. Some growers were forced to treat infestations of Leaf-Footed Plant Bugs during the month as increasing populations reached damaging levels. Early season feeding by this insect is capable of killing the nut, causing it to drop to the ground. Now that the nuts have solidified and the shells have hardened, the damage manifests itself as gumming and/or Brown Spot of the kernel, both of which are considered rejects with no value.

With the solidification of the nuts, most growers have completed fertilizer applications on their bearing orchards. However, planting new orchards using potted trees is now a year-around activity and fertilization of new, non-bearing plantings continues. Most have also terminated their cover crops, having mowed the vegetation in the orchard middles in time to provide a clean orchard floor for the upcoming harvest.

Observers are reporting that growers are working to meter out limited water supplies, managing the stress on the trees and the developing crop with the intent of minimizing adverse impacts on both. Growers receiving water from the federal Central Valley Project have been informed that they will receive no water this year. Deliveries from the State Water Project are currently set at 5% of contracted amounts. Growers in these areas are forced to rely on their privately owned wells, many with poor quality water, or purchase water from others with quantities available to sell. While allocations to growers receiving water from local irrigation districts along the east side of the northern San Joaquin Valley are generally more ample, all growers are managing their water supplies very tightly. Simply stated, the vast majority of growers in the San Joaquin and Sacramento Valleys are facing limited water supplies this year.

Reports have surfaced of growers in areas with the greatest water restrictions abandoning almond orchards, opting to divert lower quality ground water supplies to pistachio plantings, which are more tolerant of high pH and/or salinity issues. Orchards receiving high pH water and/or water high in salts or bicarbonates are becoming more apparent. Impacts of the poor-quality water typically express as a yellowing of the leaves, chlorosis, or stunted growth and burnt leaf edges, marginal necrosis, which eventually results in defoliation. To the casual observer, it is easy to miss the more subtle signs of water limitations, which are starting to become more evident in a patchwork from orchard to orchard, depending on that particular planting’s situation. Orchards showing little to no spur development, the new growth needed for subsequent years production can be found literally across the road from orchards with no apparent issues, the result of widely ranging quantity and quality of available water. 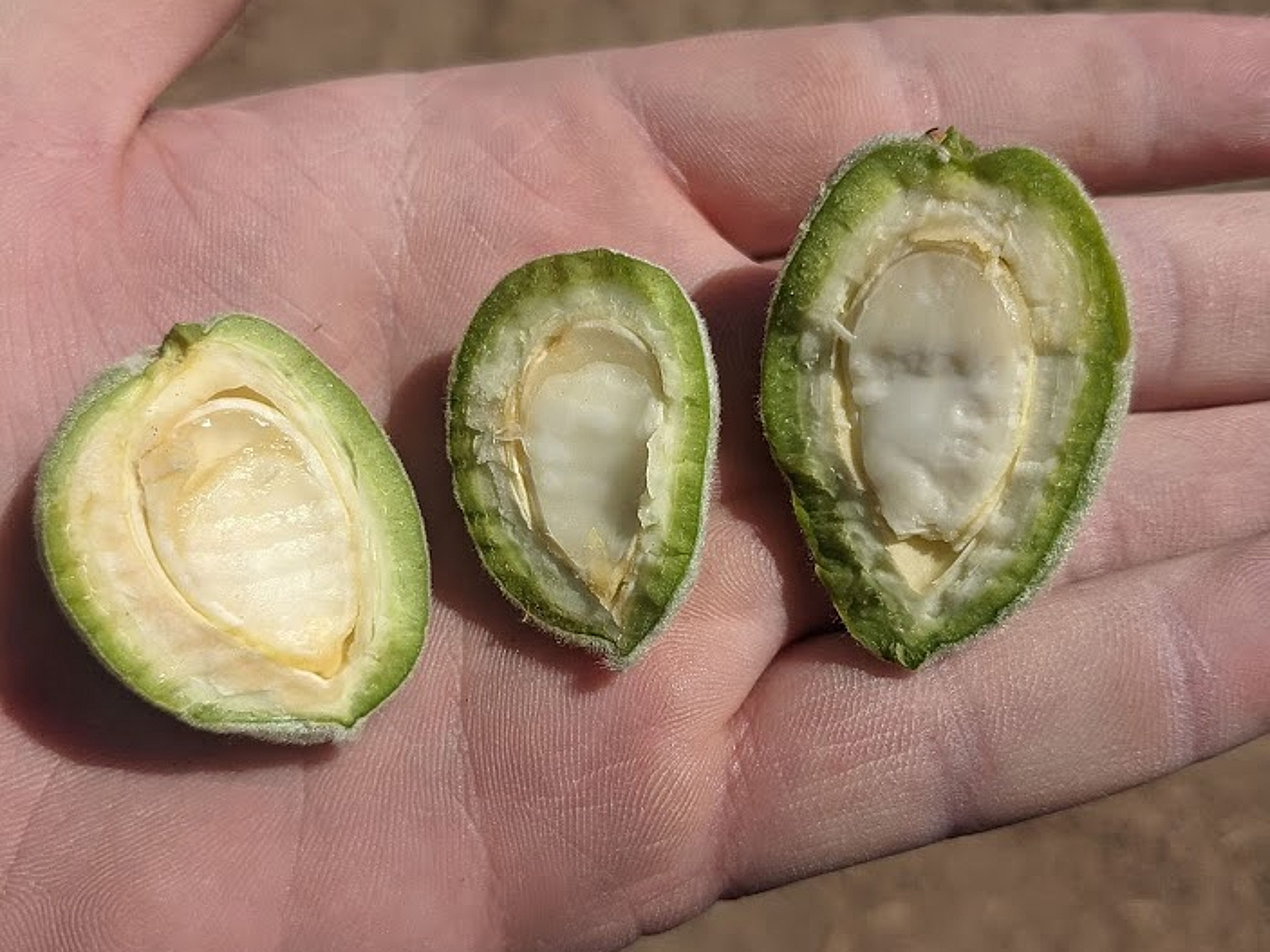 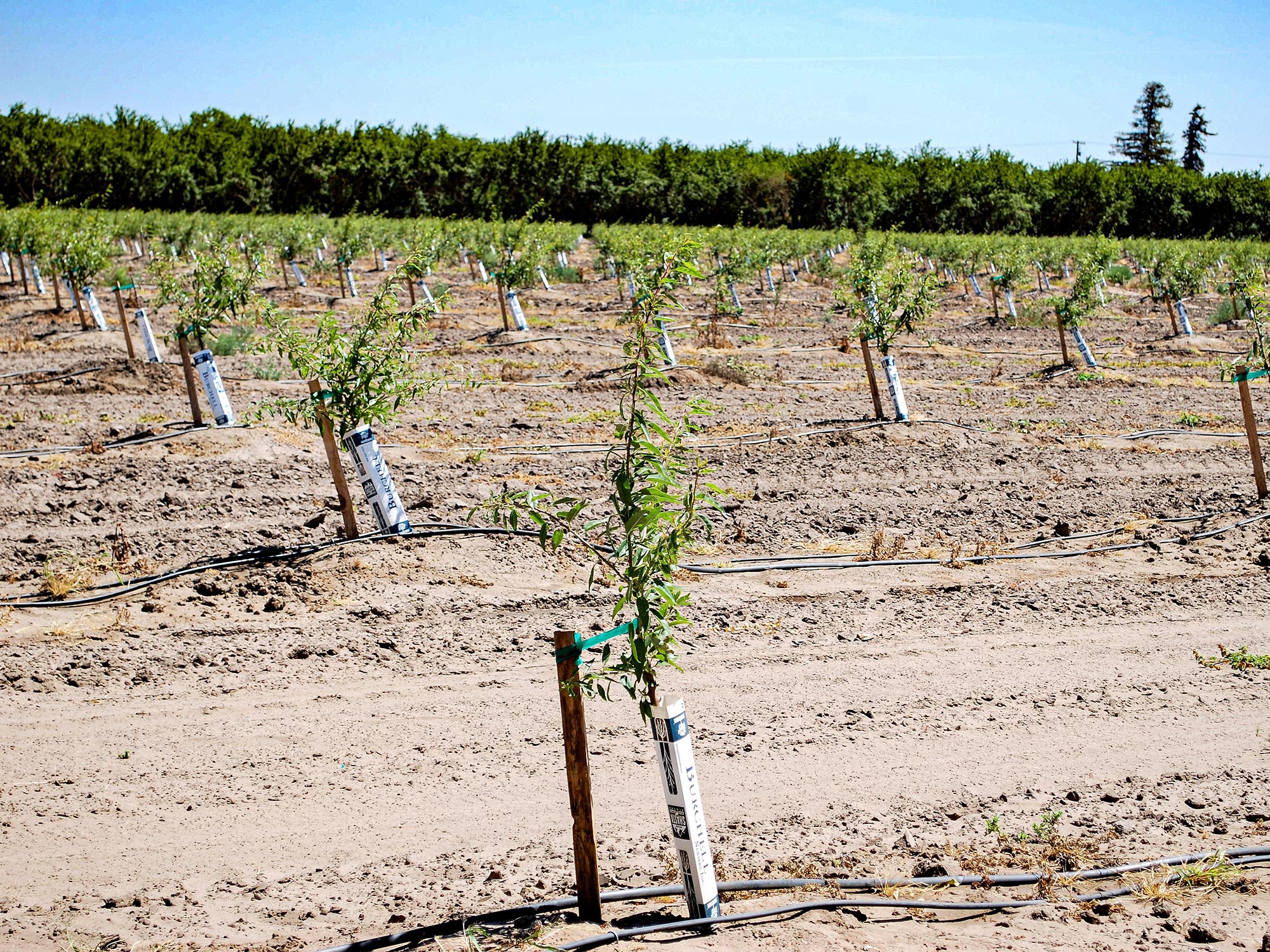 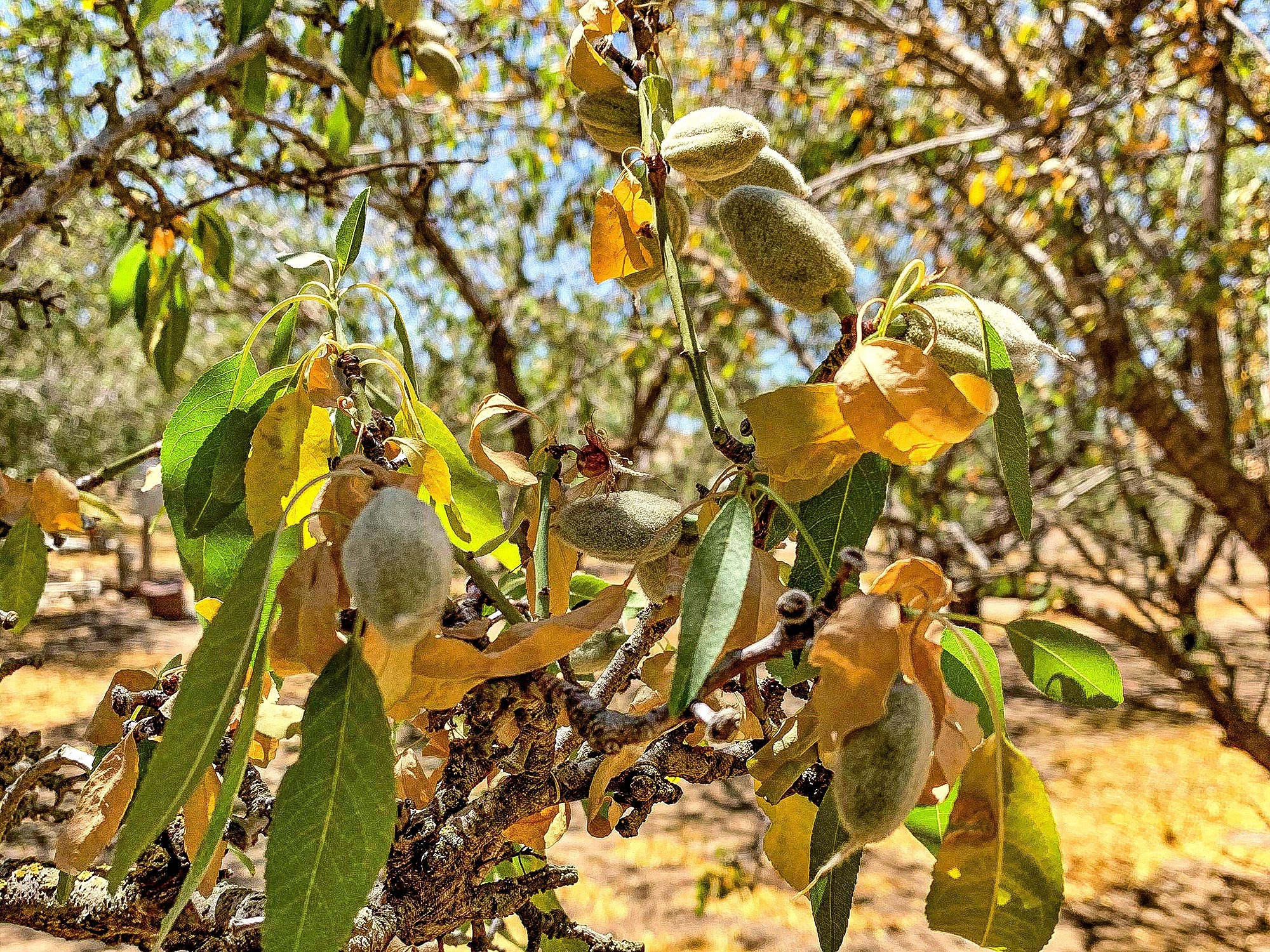 Stressed orchard without water on the west side of Merced County 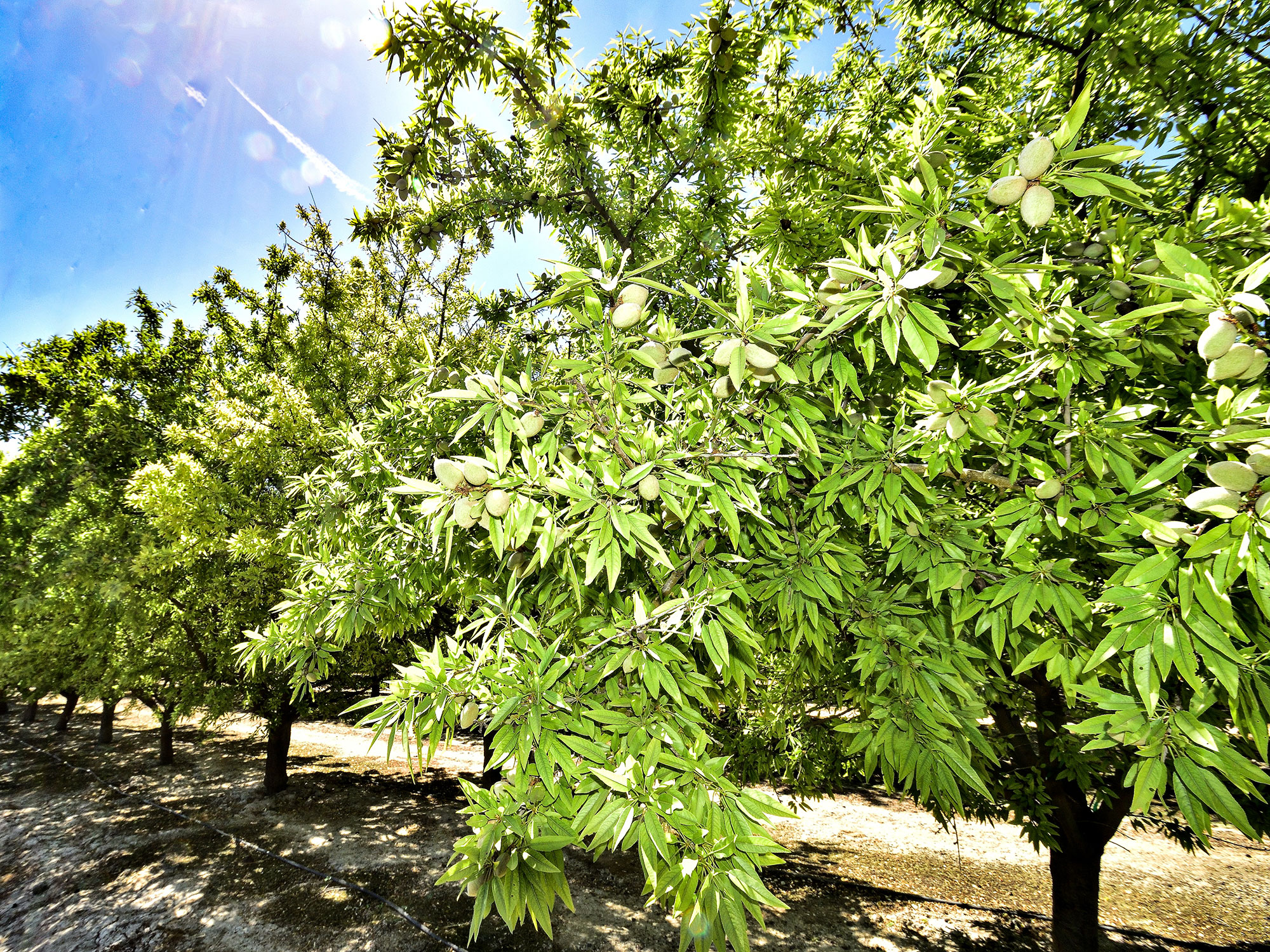 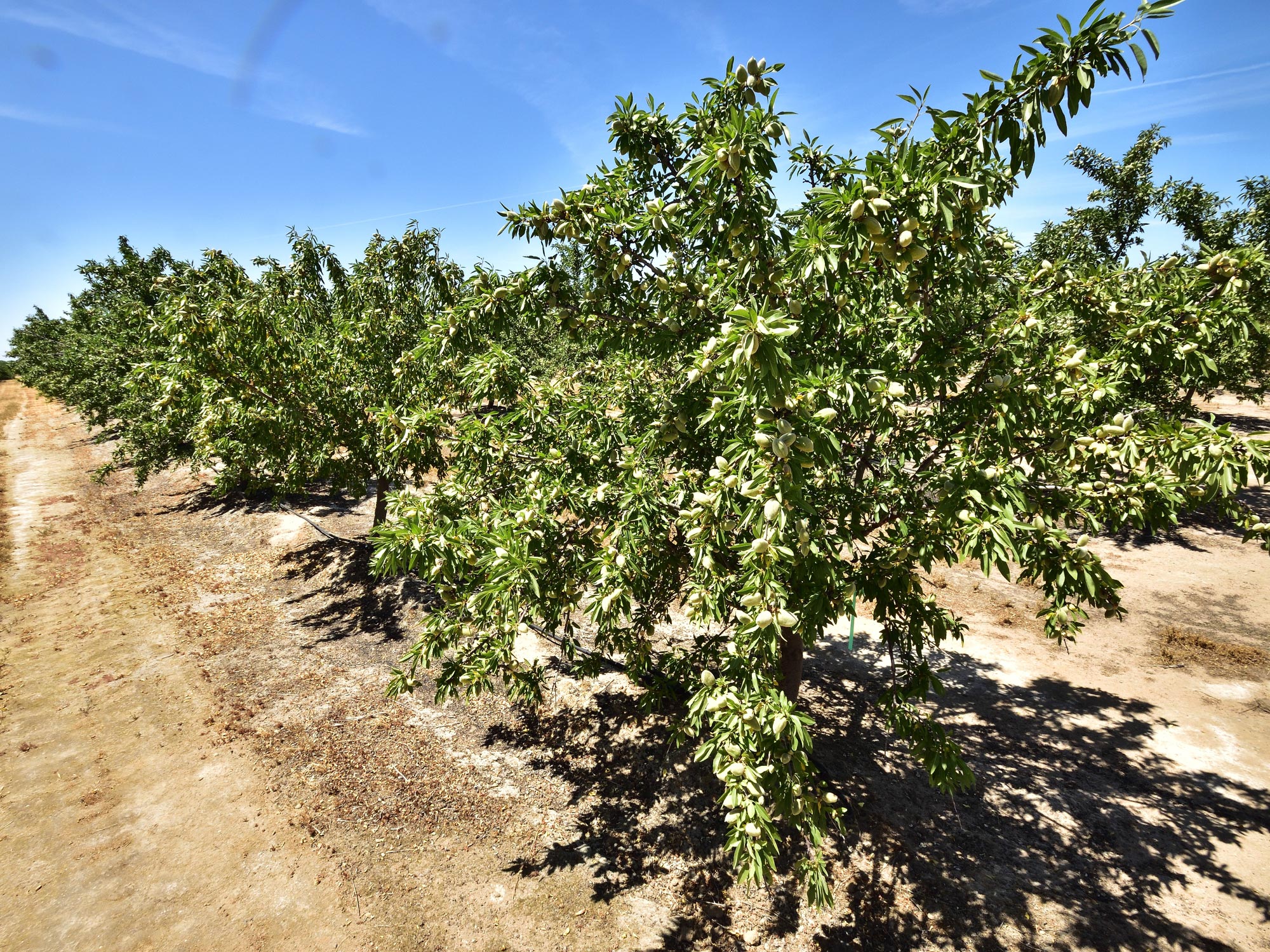 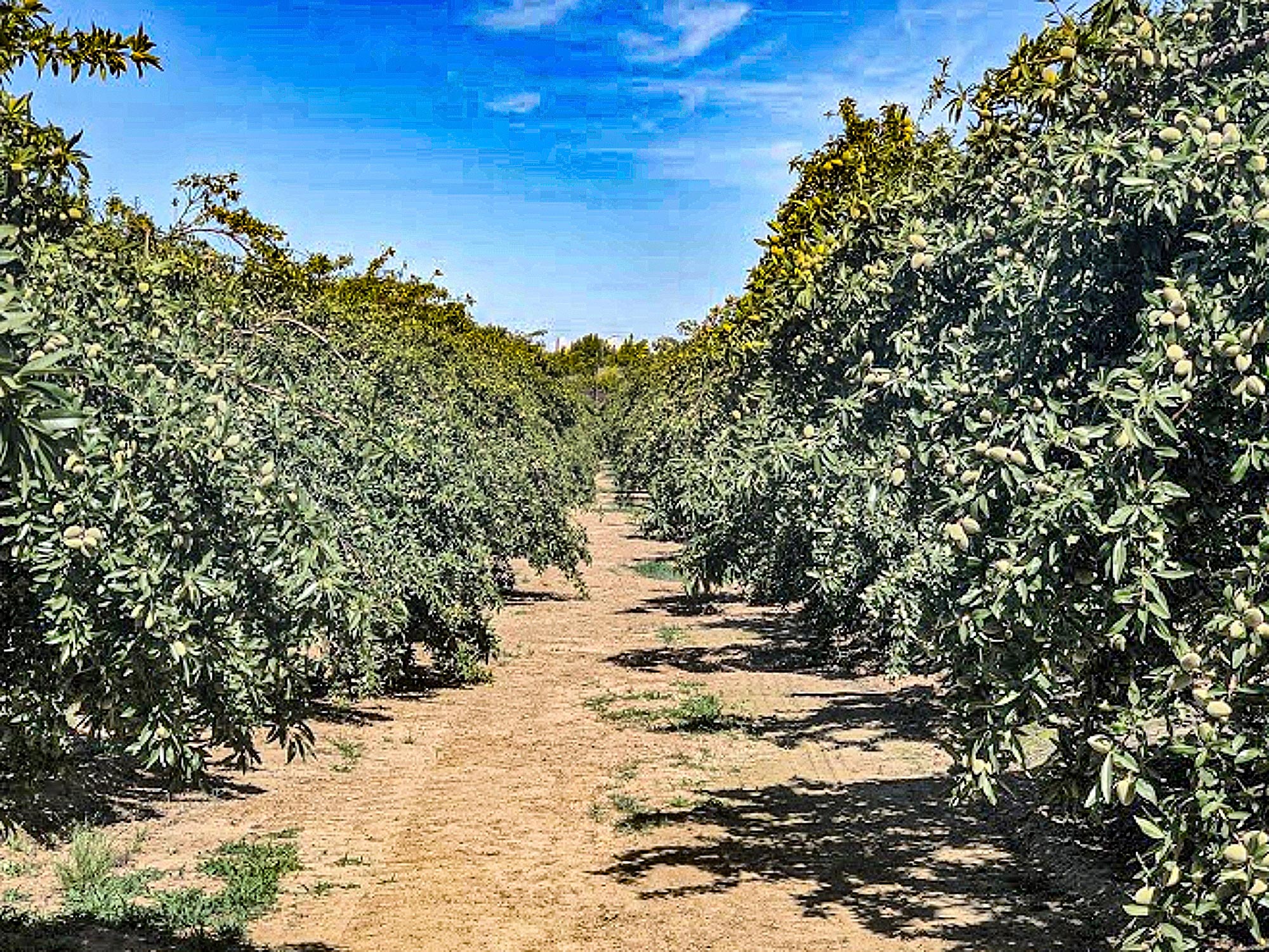 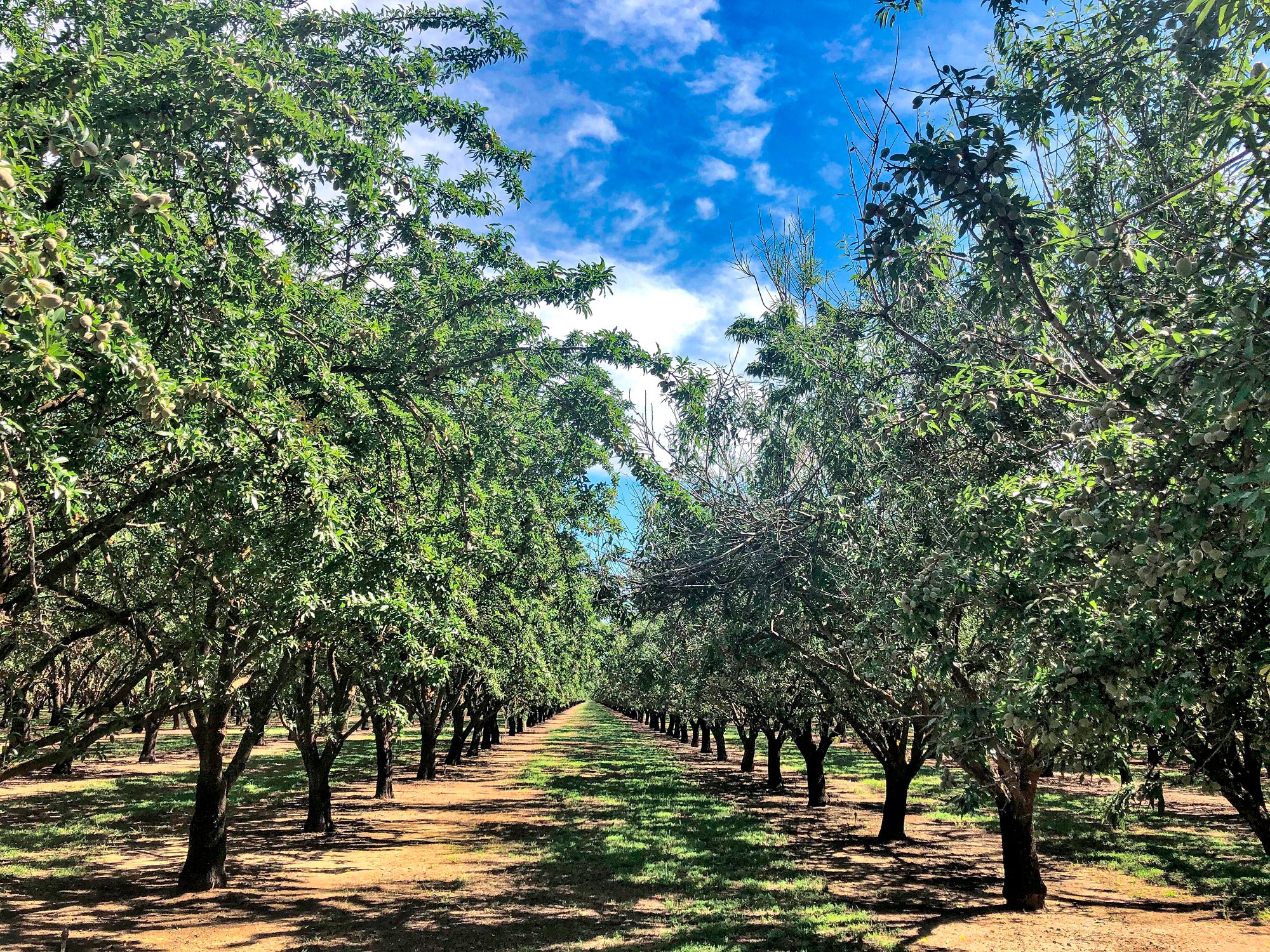 Nonpareil and Carmel in Butte County 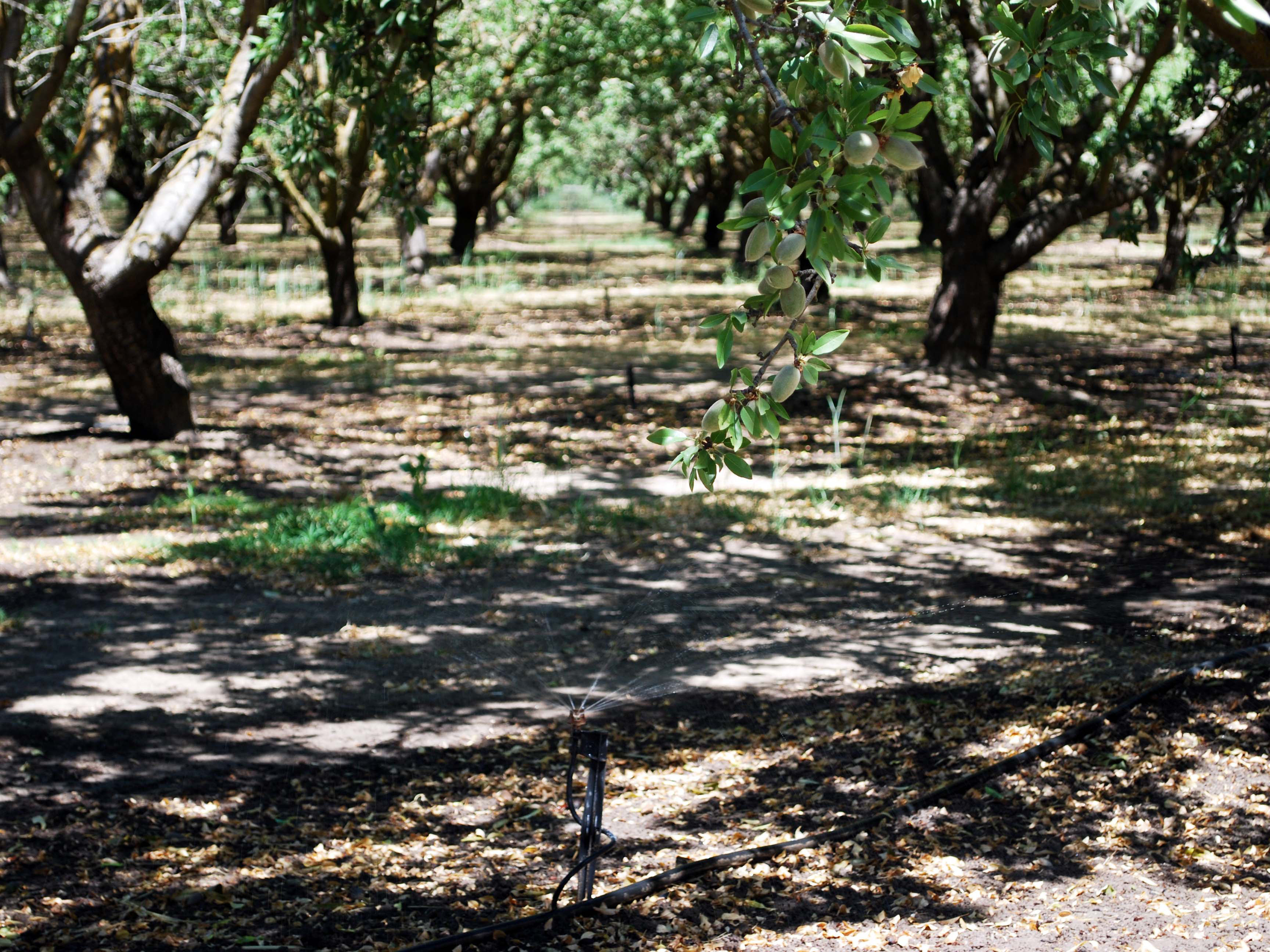