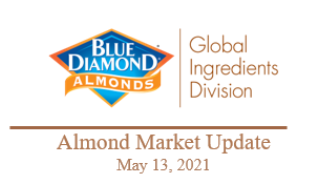 Two significant data points were published this week for the California almond industry; the April Position Report and the NASS Subjective Estimate for the 2021 Crop.

The Position Report confirmed that April was the sixth time this year that California shipped 250 million lbs or more after first reaching that number last year one time. With shipments of 249.9 million lbs (technically just under 250) in April, YTD shipments are 365 million lbs and 20% ahead of last year. Regional shipments were a near copy of March with significant gains in China, India, Europe and the Middle East/Africa. While the U.S. did not duplicate last April’s COVID-19 induced spike, more than 70 million lbs were shipped for the third consecutive month. Adjusting out the COVID spike from last year, baseline growth in the U.S. would be closer to 5-7%…[Read More]